Nick Thorkelson, Dave Wagner, and Paul Buhle have illustrated and written a new comic based on Mosse’s scholarship: “Ideas can be Weapons.” Below we have asked all three to answer a few questions about this project and about their relationship with George L. Mosse.

You can also download Nick Thorkelson’s 2014 comic about Mosse’s life, “You Had to be There: George Mosse Finds Himself in History.”

1- When did you first meet George L. Mosse? How did he influence your work?

Nick Thorkelson: I encountered George Mosse between 1963 and 1966 as an undergraduate who was lucky enough take a couple of his courses. I never got to meet him socially. Mosse exemplified something that was in the air at the time for us history nerds, namely the notion that popular culture is as significant as high culture in illuminating the historical uses and abuses of power. I am grateful to Mosse for helping me grasp the power of images and the weaponization (for good or ill) of myth and liturgy.

Dave Wagner: As a favor, Paul Buhle introduced me to Mosse over lunch at the Rathskeller sometime in the early ‘80s to ask him about a paper he’d written on a German eccentric, Guido von List, founder of a Germanic pseudo-religion based on fake readings of ancient runes. In his paper, Mosse described List’s political influence on the movement of crank intellectuals around Hitler who helped legitimize corporate funding for the early Nazi party.

Paul Buhle: Mari Jo Buhle and I took George Mosse’s European History/Culture course together in Fall 1968. We had heard of George as soon as we entered Madison, in September, 1967, but did not actually see or hear him until the following school year. Soon after we began to take the course, George appeared at evening social events hosted by our graduate school friends and ourselves, in our Spaight St apartment. He was a welcome and honored guest.

2- What is one thing you learned while working on this project?

Nick Thorkelson: I already knew modern evangelical Christianity to be, among other things, a Trojan Horse for chauvinism and authoritarianism. I did not realize how successful it has been at capturing and deflecting the spiritual impulses that have sprung up during major crises like the Civil War and the Great Depression. For me the most arresting example of deflection was William Bradford, supposedly my ancestor, slipping effortlessly from moral terror to self-righteousness, while describing the massacre of the Pequot Indians.

Dave Wagner: I had already taken several of Mosse’s courses and was by this time intrigued by his approach to intellectual and cultural history because it took into account the influence of völkisch and/or popular culture on larger political movements. By the time of our lunch, Mosse was moving on to grander avenues of study (e.g. the origins of European fascism in the public spectacles of the Baroque), while we were looking for ways to apply his thought and method to an understanding of U.S. history at a time of rising authoritarianism. During the war in Vietnam and its aftermath, we were experiencing a version of what Mosse wrote in 1940, when he was twenty-two years old: “Democratic insecurity brings conditions to such a point that we will grovel before any commanding power of the will.” [Unpublished paper quoted by Plessini in his dissertation, p. 26.]

Paul Buhle: On THIS project, we learned to deepen our understanding of “the young George Mosse,” most specifically his study of the philosophical traditions that effectively explained the rise of authoritarian views within Protestantism. 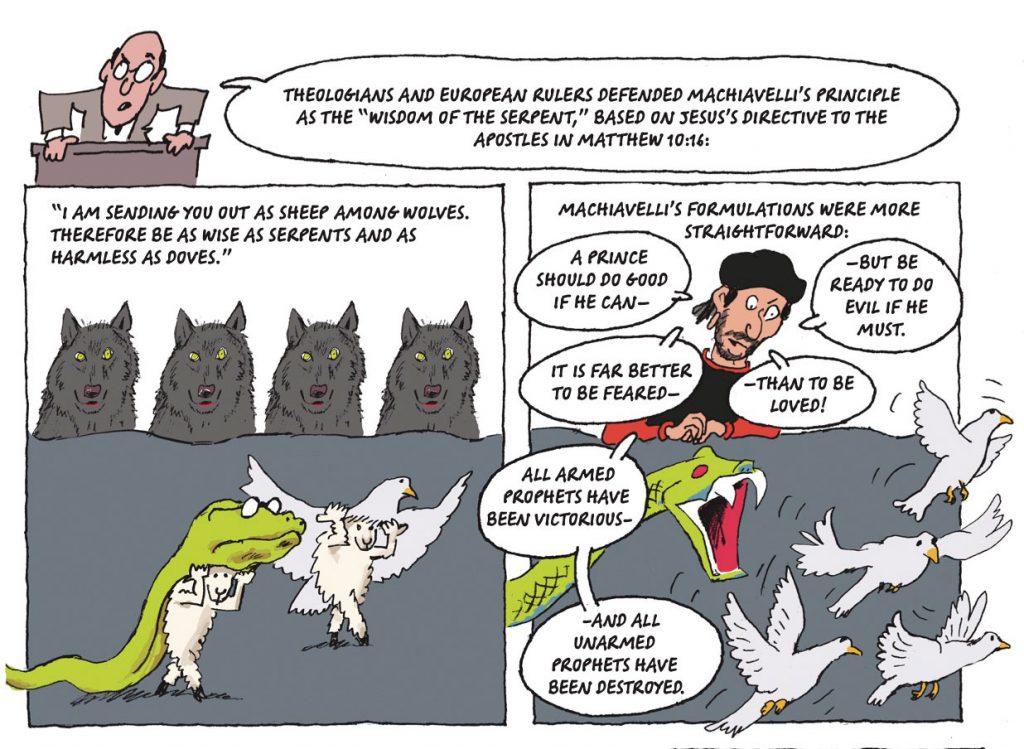 3- The title of the comic is, “Ideas can be Weapons,” what ideas do you see as being the most dangerous “weapons” in our current moment?

Nick Thorkelson: Defining freedom as indifference to the common good is an idea that unites neoliberals and the “populist” right. Therein lies the danger, not just to marginalized populations but to everyone. Within the coalition that brought us the 2016 counterrevolution, I doubt that major donors in the oil industry embrace the populist catechism (build the wall, black lives don’t matter, AR-15s keep us safe, etc.). But they fervently believe they have the right to extract and burn fossil fuels to the full extent of profitability, no matter how many homes have to sink into the sea or burn to the ground.

Dave Wagner: What we learned from Mosse is not only that ideas can be weapons but that irrational ideas that cultivate popular insecurities can be mobilized in support of authoritarian movements. In the current moment, the QAnon example, a secular version of themes dealt with in the Mosse comic, is ready to hand.

Paul Buhle: Every project of mine since the launching of Radical America in 1967 has had the purpose of making history useful, then the lessons learned in Mosse’s class, applied by myself and my contributors to a couple journals that I published, special issues of journals, anthological books and my own books/essays, are alive today, or should be. The totality of the leftwing screenwriters during WW2 that Dave Wagner and I examined was devoted to anti-fascism; and the 900 pages of Jews and American Popular Culture, three volumes, was intended to provide a visionary perspective of secular Jewish involvements in modern society; and if my own writing on race and Empire continue to have relevance, then I hope to have made a contribution for today’s movements and expressions. 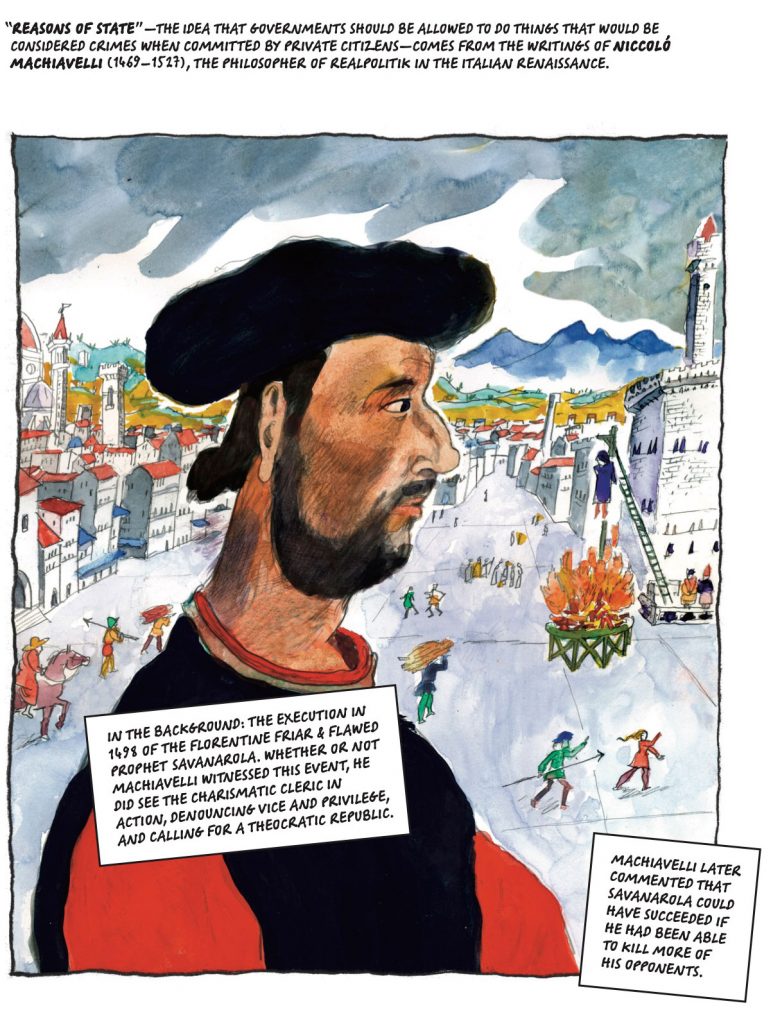 Nick Thorkelson: Nick Thorkelson is a cartoonist living in Provincetown MA. He has done cartoons on local politics for The Boston Globe and in support of organizations working on economic justice, peace, and public health. His graphic biography Herbert Marcuse, Philosopher of Utopia was published by City Lights Books in 2019. He has contributed to a number of Paul Buhle’s nonfiction comics anthologies such as Bohemians and Yiddishkeit, and he is the co-author and/or illustrator of The Underhanded History of the USA, The Legal Rights of Union Stewards, and Economic Meltdown Funnies. He is currently working on a graphic biography of the English artist/socialist William Morris.

Dave Wagner: Dave Wagner is co-author with Paul Buhle of several books on the Hollywood blacklist of writers and directors in the years after WWII and a collaborator with Paul in a graphic version of Howard Zinn’s A People’s History of American Empire and many other comics projects with Nick Thorkelson. A long time ago he was a reporter and arts columnist for The Capital Times in Madison. He later worked at The Arizona Republic in Phoenix as the editor for politics and state and national government. 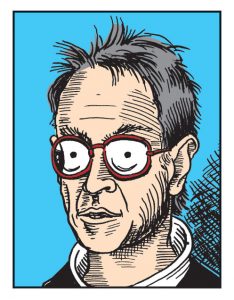 Paul Buhle: Paul Buhle, a journal publisher in the New Left and publisher of one of the first Underground Comix, has written or edited many volumes including the biographies of C.L.R. James, William Appleman Willliams and Harvey Kurtzman, returned to comic art with a dozen volumes since 2005 including The Beats, among other subjects. His works, including comics, have been published in more than a dozen languages. He taught at Brown University until retirement.