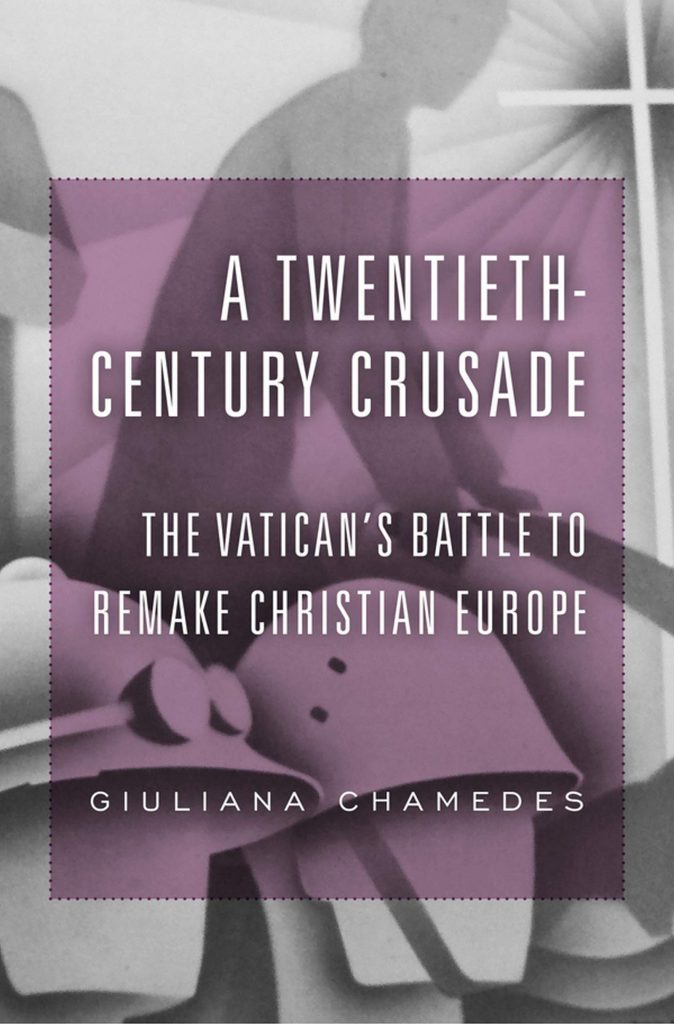 Giuliana Chamedes’ masterfully conceived and richly documented study of Vatican policy makes a signal contribution to the burgeoning literature on Catholicism in modern Europe.  Highlighting the constitutive role played by religious institutions across twentieth-century Europe, Chamedes persuasively positions the Vatican as a central player in international relations.  Replete with antisemitism and anti-Protestantism and marketed through modern media, the papal strategy of Catholic internationalism and its tactic, the concordat, constituted the world’s “largest and most ambitious experiment in cross-border anticommunist mobilization prior to the Cold War” (5).  Chamedes’ clear and compelling narrative marks a key departure in the study of diplomacy, religion, transnationalism, and modernity; wide-ranging in its implications and conclusions, it deserves broad readership.

Pope Benedict XV (1854-1922) may have established the Holy See as a “statelike institution” (3) during World War I, but the true roots of Catholic internationalism lay in the immediate postwar years, when Benedict turned to diplomacy to safeguard Catholic interests in a seemingly hostile world.  If the Vatican had favored concordats for centuries to resolve bilateral disputes, it now imagined them as acts of civil and international as well as ecclesiastical law.  Equally innovative was the Holy See’s adoption of advanced communication technologies in its grassroots campaign to foster worker and youth organizations.  In a departure from past scholarship, Chamedes stresses the significance of Eastern Europe as the proving ground for papal diplomacy; it was there that the Vatican instrumentalized nationalism to legitimate leaders of new states with contested borders in order to secure policies protective of Catholic populations.  Negotiations for a concordat with Poland, signed in 1925, served as a model for agreements with the Baltic states.  These treaties, brokered by members of the Vatican’s diplomatic corps, guaranteed the teaching of Catholicism in public schools; Church control over religious orders; freedom of the Church press; family law provisions such as state recognition of religious marriages; tax exemptions for Church properties; and protection of clergy from state courts, military service, and some civil functions.  In the coming years, the Vatican would seek similar guarantees from Italy and Germany, with fateful consequences.

Indeed, the concordats with Benito Mussolini and Adolf Hitler, in 1929 and 1933 respectively, not only sustained murderous dictators, but marked a shift in the Vatican’s larger plan to confront the Communist International with a Catholic International.  In the early postwar years, the Holy See continued its decades-old war on the dual evils of materialism – liberal capitalism and its byproduct of communism.  As the Osservatore Romano opined in January 1919, Catholics faced a fateful choice:  “Either Wilson or Lenin [or] Christian civilization, led by the Father of our great Christian family.”  But popular anticommunism and events in Bavaria (where nuncio and future pope Eugenio Pacelli consorted with antisemitic monarchists) induced a rearrangement of papal priorities.  Shaped by a fear of “Judeo-Bolshevism” following the Bavarian Soviet Republic, the “maximalist” (91) Bavarian concordat of 1924 quickly emerged as a template for future treaties.  The Holy See’s new direction was affirmed in the early 1930s when, in response to their antireligious campaign, Pope Pius XI ended concordat negotiations with the Soviets and undertook a series of initiatives, including issuing the antisocialist encyclical Quadragesimo Anno and dismissing Church officials sympathetic to the USSR.  By 1933-34, the Vatican would advance a robustly anticommunist agenda of Catholic internationalism that would extend into the post-World War II era.

Under the direction of the so-called Secretariat on Atheism after 1935, the Vatican would deploy newly creative forms of propaganda, including comic books, fiction competitions, travel exhibitions, and Vatican Radio, but it was in the realm of papal foreign policy that the Vatican undertook its most fateful initiatives.  Fundamentally sympathetic to Italian fascism, the Holy See used the 1929 Lateran Accords to extend the Vatican’s international reach and stature, including in global capitalism and communications.  (In December 1929, Pius XI [1857-1939] assured Catholics they could use radios without sin; by 1935, Vatican Radio was the only non-fascist station in Italy.)  That papal officials commenced concordat negotiations with the Nazis just two weeks after the April 1, 1933 anti-Jewish boycott underscored how little room remained for internal dissent.  Catholic efforts to condemn fascism were undercut by papal policy in the Spanish Civil War and Eugenio Pacelli’s role, first as Secretary of State and then as Pope Pius XII (1876-1958) , in editing and suppressing encyclicals critical of totalitarian statolatry.  Chamedes suggests that the minute community of Catholic dissidents, including Luigi Sturzo (1871-1959), Emmanuel Mounier (1905-1950), and Jacques Maritain (1882-1973), constituted its own Catholic International, but members were isolated and lacked institutional support.  As a result, organized Catholic resistance represented a “fringe within the fringe” (229); the overriding Church response to fascist crimes was silence.

If anticommunism led Catholic internationalism to support fascism before 1945, it ordained solidarity with the United States and Christian Democracy after the war.  Having opposed the League of Nations as a Wilsonian plot to “decatholicize” Europe and held American greed responsible for the Great Depression, the Vatican after World War II embraced Atlantic internationalism supporting democracy, human rights, liberal transnational organizations, and the United States.  Hardly relieved of traditional papal anti-Americanism – he would decry American materialism and foreign policy failings, for example – Pius XII’s abiding alliance with the United States nevertheless prompted critics to dub him the “Coca-Cola pope.”  Emboldened by Christian revivalism and older politicians committed to Christian revolution, the Vatican’s relationship with Christian Democracy was less ambivalent than that with the United States – though not without conflict, as the Pope pressured Christian Democrats to demand Catholic states anchored by concordats.  When, with the founding of the Nouvelles Équipes Internationales in 1947, Christian Democratic parties established their own international organization, they increasingly resisted Vatican pressure from the right.  As Christian politicians rebuffed papal directives on such core issues as Atlanticism, concordatory negotiations, decolonization, and the separation of Church and state, they reflected and reinforced the processes of dechristianization transforming Western Europe.  Propelled in the 1960s by the Second Vatican Council, papal agreements with Eastern and Central European communist states, accusations of fascist collaboration, and Christian Democratic coalitions with the left, the policies of Catholic internationalism transmuted.

In setting out this complex story in a nuanced yet lucid manner, Chamedes offers a host of new insights and evidence.  The Vatican’s pursuit of all-out anticommunism owed more to particular dynamics in Bavaria and Italy than previously understood; the Holy See also utilized a modern media campaign not typically associated with an institution perceived as stodgily timeless.  Divisions between lay parishioners and lower clergy, on one hand, and clerical elites on the other derived not only from conflicts over authority and access to God’s word, but also from policy differences concerning the League of Nations, the Locarno Treaties, and the Kellogg-Briand Pact.  And Catholic Action, one of Pius XI’s most consequential undertakings, is best understood as an element of Catholic internationalism designed to replace communist institutions with birth-to-death Catholic civil society organizations.

In light of the breadth and depth of Chamedes’ work, it risks bad form to suggest lacunae and, indeed, the following observations are far more queries than critiques.  In its earliest phase of concordatory diplomacy, the Vatican’s use of nationalism enabled papal emissaries to gain the support of local populations.  Within a larger ideological framework, however, the policy appears to mark a departure from over a century of papal anti-nationalism; one wonders if this were a pivot worth contextualizing.  In offering a fresh approach to diplomatic history, Chamedes rightly identifies Catholic women as key to the success of Catholic Action.  She also notes the importance of patriarchy to alliances between the Holy See and fascists.  But in ways that could have been amplified here, gender and sexuality played critical roles in the postwar years as well – first during the Hour of the Woman by infusing the postwar Christian revival with competing images of female independence and loyalty to the Church, and then politically as female subordination linked the anti-materialist agendas of Catholic internationalism and Christian Democracy.  There is also the factor of gender and elections:  If Christian Democrats served as the papacy’s leading political partners, they owed much of their potency to female Catholic voters; especially in light of the gendered nature of dechristianization, there likely would have been no Catholic International without Catholic women.  Finally, Chamedes’ conclusion that, “Catholic internationalism is the Vatican’s most enduring legacy – its signal contribution to the short twentieth century” (320), reaches far.  Certainly her characterization of the Holy See as a “political actor of great force” (320) persuades, as does her demonstration of the powerful effects of papal anticommunism.   But an argument can be made that the Vatican’s greatest impact on the twentieth century was perhaps more delineated – that by allowing Catholic internationalism to reify its unbridled anticommunism in policies supporting genocidal fascism, the Holy See committed a historical crime far deadlier than that encompassed by sponsoring traveling exhibitions.   From a completely different perspective, one wonders if, in light of the twentieth century’s unprecedented bloodletting, another kind of legacy might warrant consideration, that of spiritual sustenance for the devout as they endured untold hardship and loss.

It is a tribute to the scope and scale of Chamedes’ accomplishment that it prompts such ruminations.  In arguing that the Vatican pioneered a new form of internationalism in keeping with broader trends of internationalism that defined the twentieth century, Chamedes underscores the significance of the Vatican to the Cold War and twentieth-century international relations.  Her scrupulous source work, incisive analysis, and transnational perspective provide a model for scholars across the academy, from specialists in religion to those in international relations, diplomatic history, and European political and intellectual history.  This author’s first book is a tour de force, one that has already secured its own legacy. 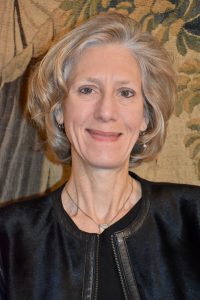 Maria Mitchell is Professor of History at Franklin & Marshall College in Lancaster, PA, where she offers courses in European history on race, sexuality, the politics of memory, and soccer.  Her book, The Origins of Christian Democracy: Politics and Confession in Modern Germany, appeared with the University of Michigan Press in 2012.  More recently, her scholarship has focused on gender and sexuality; a chapter, “Gender and the Imperfect Interconfessionalism of the CDU, 1945-1965,” is forthcoming in Mark Ruff and Thomas Großbölting, eds. Germany and the Confessional Divide, 1871-1989 (Berghahn Books).  Her current project concerns Maria Sevenich, a Communist turned Christian Democrat turned Social Democrat turned Christian Democrat.  She is also working on an article-length study of a storied soccer match – the 1982 World Cup semi-final match between West Germany and France – as a case study of postwar Franco-German reconciliation.