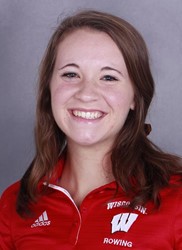 Emma Strenski was the 2017-2018 George L. Mosse Program Intern. She graduated in May 2018 with majors in History and International Studies.

In the fall of 2017 and the beginning of 2018, I oversaw the creation of a digital history exhibition to commemorate the 100th Anniversary of the end of World War I in partnership with the Wisconsin State Historical Society. The photographs were taken by Eduard Frankl, a press photographer based in Berlin, Germany, taken during World War I from 1914 to 1916. The photographs concern the German war effort, and include scenes in and around Berlin, Poland, Serbia and Bosnia and Herzegovina, Allied prisoners of war, refugees, and the battlefront throughout Europe. This archive has approximately 1,500 photographs. I scanned each photo separately, added it to the Wisconsin Historical Society Database, translated the caption from German to English, and tagged the search criteria for the image. This process took approximately six months to complete and the images are currently hosted on the Wisconsin Historical Society website.