Scholars enter the world of George L. Mosse scholarship through different avenues. Years ago, as a graduate student studying modern Jewish literature, I first encountered Mosse’s work through The Image of Man (1996). At the time, I was deep in my research into the literary production and medical histories of Yiddish and Hebrew writers who were diagnosed with tuberculosis. Evidenced in much of their writing was a prominent concern for their weakened bodies, collapsed chests, and gaunt physical presentations. They were, in Mosse’s terms, individuals who had been culturally typecast as “unmanly men.” Then, under the sign of illness, they would become patient-writers who had to confront the possibility that the so-called “wasting disease” would script the stereotype onto their bodies.

I find myself as one literary scholar among others who has turned to Mosse’s work for theoretical insights and analytical clarity. Yet in working with the George L. Mosse Program over the last few years as the Interim Associate Director, I admit that the majority of my conversations about Mosse’s work have been with historians. The reason is not hard to understand. Mosse trained a generation of cultural and intellectual historians of Europe who, in turn, have trained another generation of cultural and intellectual historians of Europe; they, in turn, are currently training the next. Indeed, Mosse’s pedagogical legacy as teacher and mentor was evident in June 2019, when so many of his former students and colleagues gathered in Berlin to participate in “Mosse’s Berlin: New Perspectives in the History of German Judaism, Fascism, and Sexuality.” It was a pleasure to serve as a co-respondent on a panel populated by Mosse’s students’ students.

Yet, as I transition into my new role as the incoming director of the Mayrent Institute for Yiddish Culture, I’d like to take this opportunity to return to one aspect of Mosse’s oeuvre and career that receives less attention—namely, Mosse’s abiding interest in literature. To be sure, Mosse’s works are studded with literary references, both high and low, classics as well as Trivialliteratur.[1] One would also not be surprised to learn that Mosse was an engaged reader. In his autobiography, he writes of his experience as a schoolboy reading Joseph Victor von Scheffel’s Ekkehard (1855). The tale of the “love of a monk (a blond giant) for a duchess” affected him strongly, as it anchored the prospect of romance in an idealized German landscape.[2]

Here at UW, Mosse’s interest in German literature, specifically, and the interdisciplinarity of Germanistik (German Studies), more generally remains on full display at the Wisconsin Workshop—the now biennial conference hosted by the German unit of the Department of German, Nordic, and Slavic, and co-sponsored by the George L. Mosse Program in History.

The Wisconsin Workshop began in 1969 under the leadership of then German Department Vilas Research Professors (and later distinguished Emeriti) Reinhold Grimm, an expert on the work of Bertolt Brecht, and Jost Hermand, a scholar of German-Jewish Studies and modern German culture. The proceedings of the Workshops were then subsequently published in stand-alone volumes in Germany, then by the University of Wisconsin Press, and more recently as special issues in the quarterly journal of German Studies, Monatshefte (housed in UW’s German Program).[3]

According to Mosse, the Workshops “were concrete demonstrations of a renewed energy” that “became campus-wide events.”[4] Mosse, himself, participated in a number of them. He further noted the importance of these events for bringing together American and German scholars of German Studies. “These workshops,” he explained, “were important intellectual experiences where visitors from Germany often took a leading part.” Quite meaningfully, he added: “I felt very much at home in this atmosphere.”[5]

Of course, Mosse didn’t stop there. He continued (likely with a wink): “The Wisconsin German department [of the late 1960s and early 1970s] was in reality a department of cultural historians.” Indeed, over the past fifty years, the Workshops have varied in topic and disciplinary focus, from 1971’s “Exil und innere Emigration” (“Exile and Inner Emigration”) to 2003’s “Music and Philosophy” to 2017’s “Back to the Future: Tradition and Innovation in German Studies.”

Nevertheless, I like to think that Mosse would also have been pleased to attend the most recent Workshop held in September 2019, which leaned more to the literary side of Germanistik than Kulturgeschichte. Organized by Professors Sabine Gross and Hannah Vandegrift Eldridge, the 51st Wisconsin Workshop turned UW’s scholarly attention to the question of “Rhythm.” Rhythm, as the conference organizers explained, “mediates between individual and social practice”; “it can be expressed and perceived visually, aurally, viscerally, or synesthetically”; and it can “[structure] our spatiotemporal experience in fundamental ways.”[6] Papers, accordingly, examined a wide variety of rhythmic form and consequence—from rhythm in ninth-century German epic poetry, the relationship of rhythm and meter in Friedrich Gottlieb Klopstock’s theory and practice, and the rhythm of radical politics in the work of contemporary German novelist Uwe Timm to the aesthetics of “asynchronicity” in German feminist experimental films of the 1970s. 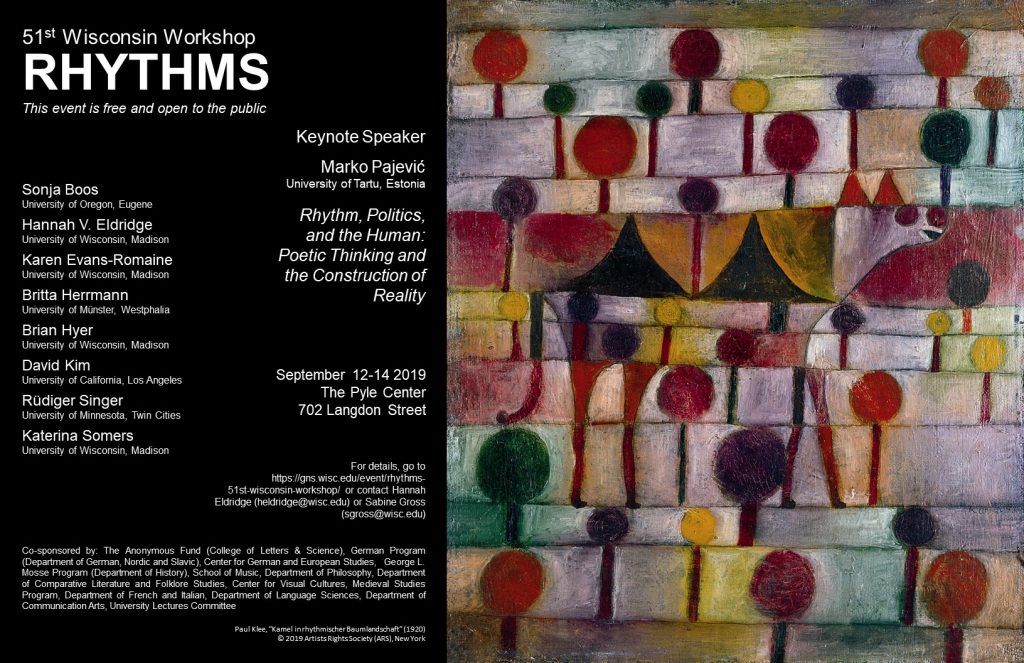 This March (2021), the wider German Studies community will have the chance to engage with the extended versions of several of these and other presentations in a special edition of Monatshefte, co-edited by Eldridge and Gross, featuring papers by Professors Marko Pajević (Tartu University, Estonia), Katerina Somers (UW–Madison), David Kim (UCLA), Britta Hermann (University of Münster), and Sonja Boos (University of Oregon. If this blog post reads as a promotion for this forthcoming special issue, that is its goal.[7] The essays in it stand to continue the fascinating discussions about the relationship between rhythm, art, and political thought first ventured last year in Madison.

Perhaps more germane, the collection speaks to something that I have come to appreciate as a central value of the Mosse Program in History, namely: the importance of keeping the intellectual conversation going, moving it in new directions, bringing in new conversation partners, and all the while doing so with a capacious sense of what constitutes intellectual and cultural history. It’s been a pleasure to work with and learn from the George L. Mosse Program in History, program director Skye Doney, director emeritus John Tortorice, historian in residence James Ungureanu, Mosse Faculty Committee Chair Tony Michels, the Mosse Faculty Committee members, and UW History Department chairs Laird Boswell and Leonora Neville. I’m looking forward to continuing to learn not only from Mosse’s scholarship (click here for information about the forthcoming publication of Mosse’s Collected Works) but from the intellectual debates that his students, colleagues, and the Program’s interlocutors rigorously pursue. 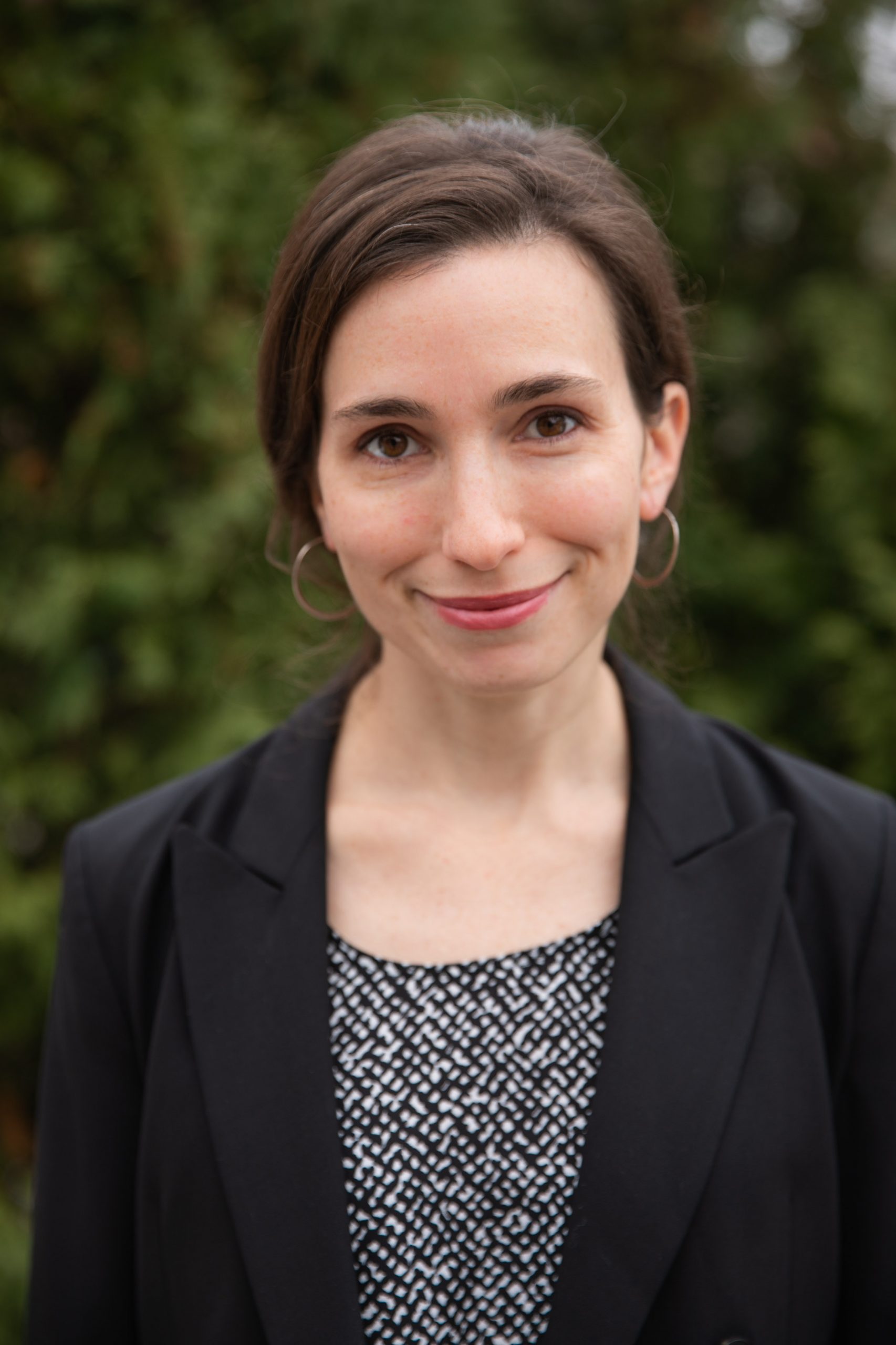 Sunny Yudkoff joined the Department of German, Nordic, and Slavic, as well as the Mosse/Weinstein Center for Jewish Studies, in the fall of 2016. Previously, she taught at the University of Chicago. Her research and teaching focuses on Jewish literary production from the mid-nineteenth to twenty-first centuries.  Her first book, Tubercular Capital: Illness and the Conditions of Modern Jewish Writing, was published with Stanford University Press (2019). She regularly teaches courses in both Jewish Studies and the Medical Humanities. Her work has appeared in Prooftexts, Journal of Jewish Social Studies, Studies in American Jewish Literature, Literature and Medicine, and elsewhere.