When I first accepted an internship with the George L. Mosse Program, I most hoped that I would be able to expand and deepen my passion for history. While working with the Mosse Program, I have been posted at the University Archives under the supervision of Oral History Program Head Troy Reeves. I have primarily been working to make oral history material more accessible to researchers, through creating transcripts and assigning metadata and indexes to interviews. Since being assigned to the University Archives, I have discovered an entirely new area of history of which I have grown very fond: the local history of the UW-Madison campus.

As a historian, I had never been much for local history. Indeed, I am from Northern Wisconsin and my most prized papers cover the history of France and Egypt, but that all changed shortly after beginning work for the University Archives. I have listened to dozens upon dozens of hours of interviews, with everyone from retired professors to current students. Everyone talks about something a little different: college applications, changes in the University over their many years, and most recently teaching during COVD-19. Through each and every interview of UW-Madison affiliates, though, one thing becomes clear: the strength of the Badger community. Badgers come alive and stick together when facing the toughest circumstances, either on campus or in the world around them, and that admirable loyalty shone through the interviews I listened to. I would like to focus on two events in the history of UW-Madison, and how the Badger community responded.

For those alive for the 9/11 attacks, the first question always seems to be “where were you when you heard?” For many lifelong Madisonians, the answer is “on the UW-Madison campus.” In a time where the nation came together as one, to support one another through one of the most difficult times in recent history, Badgers were no exception. Wisconsin Union Theater Director Ralph Russo remembers his experience on the fateful day:

“So I go into work. And I walk in, and I get in the elevator. And as soon as I get out of the elevator, one of my colleagues was like, you know, in tears, and I’m like, ‘what’s going on?’ She goes, you know, ‘another plane hit the tower, and we’re under attack.’ And I’m like, what? And so we raced down to the one TV at the time, that was somewhere in Memorial, along with a large group of people who were crammed in around it.”

For so many, learning about what had happened on 9/11 was a collective experience, shared with the people around them, and for many, the people around them were fellow Badgers. What stands out to Russo most about the day is the support of the Wisconsin community. As he and others crowded around a Memorial Union television, he remembers “at least a couple of New York students there that were really having a difficult time. And, you know, I think the group tried to comfort them as much as we could.” In a moment where kindness and support were so sorely needed, Badgers responded to each other in an instant.

The University also set up programs to support employees, many of whom came into work on campus on the morning of September 11 to discover what had happened. College of Engineering staff member Jean Hendricks was one such employee. In a March 2017 interview, she recalls that “our media staff hooked up a live feed of CNN on one of the big screens, and some of us went down and we just watched in continued disbelief of what was going on.” Much like Ralph Russo, Hendricks’ experience of the day is marked by being with other Badgers while watching it unfold. She, too, recalls the support of the campus community responding after the events of 9/11.  “And I know that the Campus Employee Assistance office worked with the campus as a whole and units as needed, or as wanted to help people deal with this never-ending flood of information.”  For Hendricks as well as Russo, the support of the UW-Madison campus community is a central piece of her memory from that day.

For many, the COVID-19 pandemic is defined by a profound feeling of isolation. All over the world, people stayed away from loved ones and quarantined in their homes, uncertain and fearful of spreading the virus. As campus life moved online and UW-Madison students returned to homes all over the world, maintaining a sense of Badger community was difficult. However, students and staff alike thought creatively and worked diligently to maintain some sense of normalcy and togetherness in trying times.

One such example comes from the History Department, specifically its history-focused writing center, the History Lab. PhD Candidate Tyler Lehrer was the 2020-21 History Lab Co-Ordinator, and was faced with the challenge of how to provide students with history services in a meaningful way as the world remained digital. As Co-Ordinator, Lehrer worked with faculty and staff across campus to continue making the history lab accessible to students. In a March 2021 interview, he recalled “work[ing] with the UW advising office both in Letters and Sciences and within our department and some other stakeholders on campus to set up and manage an online signup process for students where we can at the same time, allow students to sign up with one of us on our website through a web calendaring system.” Lehrer was able to find the help and support he needed from other bodies on campus in order to keep the History Lab running in a useful form.

In addition to collaborating in new ways with other campus employees, Lehrer found it rewarding to work with students. He explained that “this has actually been, you know, fabulous… [History Lab] has really stretched my own range and my own ability to really think about history education, and in a way that I think, I hope, is really going to benefit my current and future teaching…. the student also benefits by virtue of being able to make that communicative act much clearer, I think we both benefit from that exchange.” In working with students, despite the COVID-19 pandemic and the distance it enforced, Lehrer was able to maintain a relationship with History Lab students and benefit from that relationship himself. Because he and other campus staff had been so determined to make as many services available as possible, and students were willing to be flexible in taking advantage, the History Lab was able to maintain one shared experience for Wisconsin history students all over the world.

Prior to working for the University Archives, I can claim no great interest in local history. However, I am proud to report that that has very much changed in my time with the George L. Mosse Program. I have been exposed to entirely new fields and methods of history, and found them entirely fascinating. I have expanded my historical horizons in new ways. Listening to the stories of Badgers from generations before my own has revealed the depth of community that this campus has nurtured for years upon years of Badgers. 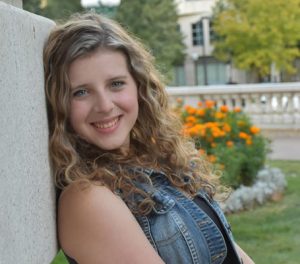 Anastasia Bruss is a senior studying History and International Studies: Global Security at the University of Wisconsin-Madison. Her particular historical interests are Jewish history and the history of 18th-century Europe and its colonies. Her capstone paper explored pro-Jewish rights arguments in pre-Revolutionary France, and she especially enjoyed the work because it allowed her to uncover stories often lost in the more “famous” events of the time. Outside of her academic work, Anastasia serves as the Vice President of Phi Alpha Theta, Lambda Xi Chapter, the UW-Madison chapter of a national history honor society, and as Team Principal of Wisconsin Racing, a student auto racing team on campus.