Over the last year, I worked as a George L. Mosse Intern in Digital and European History. My work focused on assisting the Oral History Program at the University of Wisconsin-Madison Archives & Records Management. I edited, indexed, and synced a wide variety of oral histories. Now that the year is over, I want to touch on a few specific projects on which I spent quite a bit of time.

First, after listening to some oral histories on the LGBTQ+ experience in Madison during the 1960s, 1970s, and 1980s, I took the opportunity to write a Tumblr post for the ongoing “Found in the Archives” series on the University of Wisconsin-Madison Archives’ Tumblr page. For many of us living in Madison today, the fight for LGBTQ+ rights seems almost like an afterthought — though the Supreme Court certainly is making many of us rethink the concreteness of Americans’ rights to privacy and individual freedom. In my post, I relied on the oral histories of two LGBTQ+ activists, Barbara Lightner and Jess Anderson, to understand the struggle for Madison to become the more tolerant place it is today. Throughout the year, I had the opportunity to listen to many oral histories and reflect on the importance of the stories being told in them, but the opportunity to write about the Lightner and Anderson oral histories allowed me to sit with their stories and reflect on them in depth. I encourage anyone interested to check out my piece!

Second, the main oral history project I took on during the year was to catalog the Academic Staff Award winners series. From the outside, this project may seem remarkably ordinary or even mundane, as each oral history features a member of the University of Wisconsin academic staff discussing their work after receiving a campus-wide award. The winners came from totally different departments across the university and thus worked on completely different projects. However, I found that something magical happens when someone sits down for an oral history about their job: they open up and reflect on the university and their work within it. Some academic staff award winners used the oral history interview to appreciate the complexities of their job and the hard work necessary to run such a large university. For others, especially those who received an academic staff award near the end of their career, they often used the oral history to detail grievances, challenges, and institutional problems they encountered at the university. As a member of the class of 2022, nearly two years of my college experience were disrupted by the COVID-19 pandemic. After the start of the pandemic, I started to notice more of the issues associated with an institution as big as the University of Wisconsin-Madison. With the usual energy of campus tempered by the silence and isolation of the pandemic, the university-student experience felt more heavy-handed and distant than usual. Hearing some of these academic staff reflect on their careers, careers that lasted far longer than my tenure at the university, helped me feel like I was not the only one struggling within such a large institution.

Additionally, the academic staff in some of these oral histories detailed the lack of respect the university and some members of faculty displayed toward them and their work. Many of the academic staff had the same or similar qualifications as faculty, yet over and over again in their oral histories, they talked about how the university made the distinction between academic staff and faculty to keep department budgets down. Manuela Romero, the former Assistant Dean of Undergraduate Studies in the College of Engineering, had one of the most unique outlooks on the division between academic staff and faculty among the academic staff oral histories. Romero started her career as a tenure-track professor, but felt that as an academic, her work was only ever read by other academics. Eventually, she took the assistant dean position at the University of Wisconsin, switching from faculty to academic staff. In her oral history, she speaks to the challenges of being pigeon-holed as an academic staff member after she previously enjoyed some of the privileges of being a professor. In the rest of her interview, Romero discusses how she tried to promote greater diversity and inclusion, especially for first-generation college students and students of color, and she speaks to the institutional barriers baked into the university system that caused challenges for those students. While it may not seem like the most obvious place to start, if anyone is looking for honest reflections on the history of the university system, the responsibilities of the university, and how university life changes over a career, take a look at the UW-Madison Oral History Program series on Academic Staff Award Winners.

Finally, perhaps my greatest takeaway from spending the year working with the Oral History Program was the sheer breadth of subjects contained within its archive. I spent time working on one of the seven tapes of oral history with former university chancellor Fred Harvey Harrington (1912-1995). I indexed a series of oral histories on Black artists at UW-Madison. I edited the transcript of a woman who was part of the first class of female firefighters to work for the City of Madison. And I only scratched the surface. As someone who just finished a bachelor’s degree in history, I have spent my fair share of time reading texts and using them as evidence in arguments about greater historical trends. Before this internship, I had never listened to an oral history, yet now I believe they are among the most important sources for historians. History students and academics can spend years practicing their ability to read documents well — to consider the source of the document, the audience for whom it was prepared, and “reading against” the text’s original meaning. But no matter how well historians analyze a text, they are constrained to the words on the page. With oral histories, historians have the benefit of hearing follow-up questions and their answers, and they have easy access to so much more information. With cloud storage, anyone with access to the UW libraries could listen to hundreds of oral histories filled with thousands of hours of interviews. Though I did not necessarily expect to be working at the UW Oral History Program all year, I gained great respect for the ambitious scope of the program and hope students, academics, and the public continue to realize the value of that program in the future. 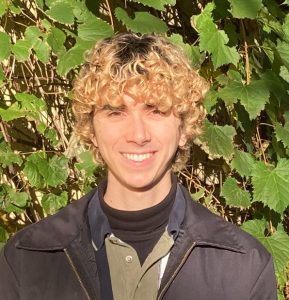 George L. Mosse Program Undergraduate Intern (2021-2022)
Jack Styler graduated in May 2022 from UW-Madison after studying History and Political Science with a certificate in Art History. Under the guidance of Professor Allison Powers Useche, Jack wrote his senior honors thesis – “Loopholes: The Rise and Fall of a Far-Right American Paramilitary during the Reagan Years” – on the history of right-wing paramilitaries in the 1980s, specifically related to the Iran-Contra scandal. Outside of school, Jack is a captain of the mock trial team at UW-Madison and tutors West High School students as a part of Badger Volunteers. Jack is excited to work on many worthwhile projects, including making oral histories more accessible, as a Mosse Program Undergraduate Intern in European and Digital History.