This past spring and summer, my internship with the George L. Mosse Program in History took me to UW Madison’s very own University Archives housed at Steenbock Library. During my time in the warm and wonderful place that is University Archives, I had the opportunity to expand my knowledge of Professor George L. Mosse’s impact on the University through oral interviews with his former students. I also got a firsthand glimpse into the amazing material housed at the archives while helping with a Media Collection survey project. These two projects, though seemingly unrelated, are tightly connected due to their focus on the places, people, and events that were unique and special to the University of Wisconsin.

During the Spring 2018, I started working under Troy Reeves at the Archives to create records and index recent interviews of Mosse’s former students conducted by Director Emeritus, John Tortorice, and current Director, Skye Doney, of the George L. Mosse Program in History. Sidney Iwanter, a history and film studies major at UW who attended from 1967-1971, graciously devoted his time to telling about his experiences first as a Greenbush neighborhood Madison resident and then as a UW student. Sidney’s interview is incredibly moving, not only due to his larger than life personality (which was evident even through just audio), but his candid descriptions of growing up in the diverse Greenbush neighborhood in the 1960s and his undergraduate experiences attending UW during a relatively tumultuous period. 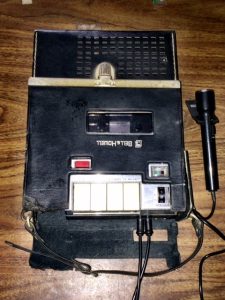 As the child of European immigrants, Sidney grew up in the Greenbush neighborhood of Madison. The Greenbush neighborhood was a diverse community, and Sidney fondly remembers meeting its many Italian, Jewish, and African American residents who would sit on their porches and invite him into conversations about their lives and pasts. He credits these front porch chats of his childhood with sparking a love and appreciation of history, which he would come to study as a college student. During his time as a history major at UW, Sidney took both Professor Harvey Goldberg’s and Professor Mosse’s classes. More interestingly, Sidney surreptitiously recorded their lectures with a Bell and Howell recorder he got as a Bar Mitzvah present. Sidney was enamored with Goldberg’s style of teaching, which was so performative that it made students lose themselves in history. He juxtaposed Goldberg’s style to Mosse’s, when he revealed that Mosse taught with a more sinister tone, as he explained to students the horrors and origins of European antisemitism and Nazism.

As Sidney was learning about historical political movements in Goldberg’s and Mosse’s classrooms, he also bore witness to political movements on campus. He attended UW during a period of extreme political unrest in Madison due to the Vietnam War. Sidney vividly remembers seeing protests on State Street in 1965 and participating in them. He also witnessed firsthand draft numbers being called at Memorial Union, and he described the wailing, screaming, and shouting that ensued as UW student’s lives were changed forever in that moment. For Sidney, this traumatic event revealed that no place was safe from the draft, not even the beloved Union where he loved to play Hearts.

The contents of Sidney’s interview stayed with me as I continued my work at the Archives. Rarely had I walked into the Union without thinking of the range of experiences students have had in its space. Prior to Sidney’s interview, I had wrongly assumed they were all positive. Earlier during my time at the Archives, I had listened to Professor Emeritus Joseph Wiesenfarth’s (1970-2000) poem, “In the Memorial Union Café,” where he described watching a young couple in love at Memorial Union while he serenely drank black coffee and ate a tangerine. This idyllic image of the Union was what I thought of when thinking of the history of the campus, and Sidney’s description of the draft occurring in the same space complicated my view of it. However, why wouldn’t the Union, the heart and soul of the UW-Madison campus, have a history as complex as the university itself? 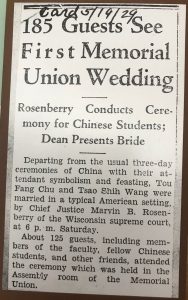 Much as I could not escape the aura of present-day Memorial Union as a student, the history of the Union kept finding me at the archives as well. While I was completing a media collection survey (which is a fancy way to say I looked through boxes of archival material and documented its condition), I stumbled upon an interesting box about the Union’s history. Among old photographs and poems, I found a newspaper clipping documenting the first ever wedding held at the Union. The newspaper clip, from May 5th, 1929, announced that two Chinese students—Tou Fang Chu and Tsao Shih Wang—were the first individuals to ever get married at the Union. This fascinating bit of information became another piece of the puzzle in my reflection of the role Memorial Union has played on campus throughout its history.

From a place to get a cup of coffee, to providing a space for the draft, to a wedding venue, Memorial Union has served students in many ways, both positive and negative. The history of the “living room” of campus is as storied as the experiences of the students who have treasured it. I am grateful for being able to study the history of University of Wisconsin-Madison’s complicated past and for aiding the Archives in the preservation of this history. 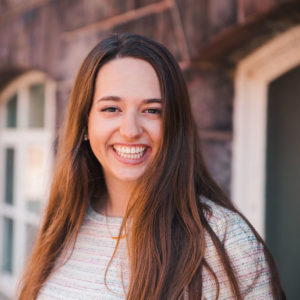 Claire Hitter is currently working on her B.A. in History at the University of Wisconsin-Madison. Having recently studied European Jewish history she has developed an interest in the cultural expressions of Judaism. She is especially fascinated by individual stories and has enjoyed the opportunity to write biographical essays for classes. Claire is excited to develop her interests and uncover fascinating stories in her position as the George L. Mosse Department of History Undergraduate Intern.