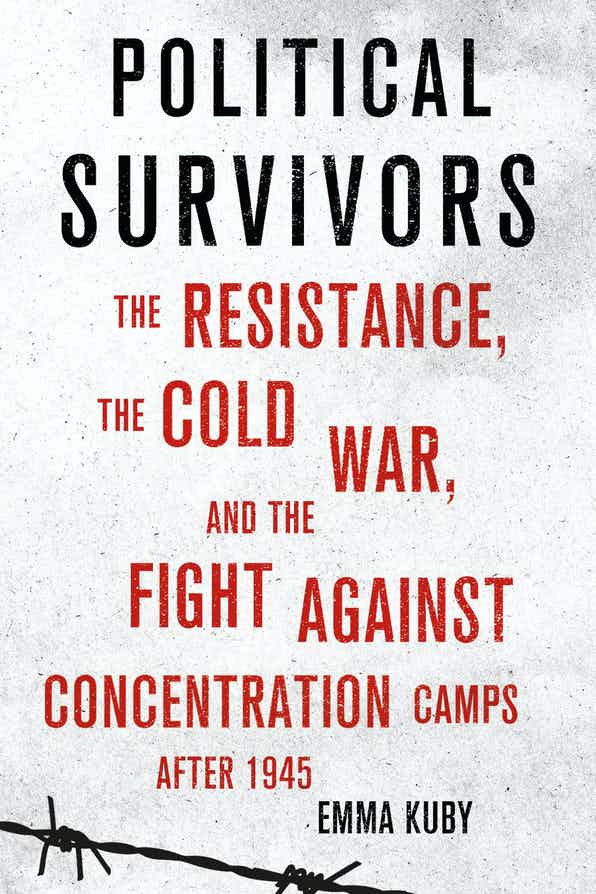 Emma Kuby’s Political Survivors: The Resistance, the Cold War, and the Fight against Concentration Camps after 1945 tells the institutional history of the International Commission against the Concentration Camp Regime (CICRC), a short-lived organization assembled in 1950 under the leadership of French writer and Buchenwald survivor David Rousset. Composed of fellow European political resistors deported to Nazi camps, its members launched thorough investigations into abusive carceral systems throughout the world before disbanding at the end of the decade and subsequently drifting out of popular memory. On the surface, the CICRC’s mission sounds irreproachable: to mobilize survivors’ expert knowledge and memories of trauma in order to prevent concentration camps resembling Hitler’s from reemerging. The CICRC pursued a supposedly apolitical call to fight global injustice. So why did it fall apart so quickly?

Kuby provides a compelling answer to this question. Her work details how Rousset’s partisan entanglement in Cold War politics and his decision to exclude most Jewish Holocaust survivors from membership undermined the group’s universal claims. Even more detrimental to its mission, however, was its members’ attempts to use their experiences as Nazi concentration camp survivors to pass judgement on forms of state violence that rarely fit this model, such as France’s use of torture during the Algerian War. Nevertheless, Kuby powerfully illuminates how despite its failures, the CICRC’s investigations drew international attention toward ongoing acts of political repression. She argues that, by doing so, they helped to legitimize victim witnessing as a weapon to fight injustice earlier than historians previously recognized. Her engaging study adds nuance to our understanding of how Europeans struggled to define and combat abuses of state power in the aftermath of the Second World War. It also reveals the pitfalls of viewing contemporary forms of state violence through the blinders of past experience.

Kuby opens her account with David Rousset’s 1949 “Appeal” to former Nazi camp inmates to investigate the conditions of the Soviet gulag. Published in the conservative newspaper Le Figaro littéraire, the article set off heated debate in France about the role of survivor testimony in combatting what Rousset labeled “concentrationary regimes,” and led to the formation of the CICRC the following year. Its first and most prominent members were anti-communist French political deportees, including ethnologist Germaine Tillion and journalist Louis Martin-Chauffier. It later admitted delegations from several other European nations. However, membership was not open to all concentration camp survivors. Prospective inductees had to prove that they had been deported from their country of origin to a Nazi camp because of their political resistance against the Nazi regime. As a result, Jewish Holocaust survivors, deported to camps for their identity rather than their actions, could not become members. Rousset’s decision to exclude “racial” deportees was not ideological but strategic.  He recognized the powerful influence that resistors, hailed as national heroes, wielded over public opinion in postwar Europe. Nonetheless, Kuby details the important role that Jewish historian Léon Poliakov and Jewish lawyer Théo Bernard played behind the scenes as paid staff members. Rousset would later come to regret the CICRC’s marginalization of Jewish trauma after popular memory of the camps began to shift in the late 1950s to foreground the Holocaust.

Yet it was not the exclusion of Holocaust survivors that first led critics to question the group’s claims to speak universally for present and future concentration camps victims.  An ex-Trotskyist who had become increasingly critical of Stalin’s use of forced labor, Rousset’s direct comparisons of the gulag with Nazi camps brought him into conflict with French leftist intellectuals. One of his most prominent opponents was philosopher Jean-Paul Sartre, with whom he had previously helped form the noncommunist and anti-capitalist revolutionary group, Rassemblement Démocratique Révolutionnaire. Following Rousset’s “Appeal,” however, Sartre accused his erstwhile ally of firmly entering the capitalist camp and questioned his stated premise that survivors could provide unbiased ethical judgement simply by virtue of their lived experience. But the “Rousset Affair” that ensued (which included a high-profile libel case) did not prevent the CICRC from spending its first year gathering witness testimony from gulag survivors in order to stage a mock trial against the Soviet Union in 1951. The highly-publicized trial encouraged international condemnation of the gulag, but also invited more criticism of the CICRC’s anti-communist leanings.

Rousset plunged his group even deeper into polarized Cold War politics the same year as the trial when he covertly accepted funding from the CIA. Unfortunately, Kuby was unable to plumb deeply into this collaboration because the CIA archives remain inaccessible to historians. She surmises, however, that the U.S. government viewed the CICRC’s findings as a treasure trove of anti-communist propaganda, while Rousset was thrilled to accept much needed financial aid as long as his group maintained autonomy over its future endeavors.

In order to make true the group’s stated claim to investigate all forms of “concentrationary” violence, its members quickly worked to widen the scope of the CICRC’s inquiries. In 1951 they toured dozens of detention camps in Spain and Greece and conducted interviews with their prisoners. In 1952, Rousset began to focus on Chinese labor camps, leading the CICRC to hold a mock trial against Mao’s laogai in 1956. Most controversially, the group turned its gaze inward, toward French treatment of political prisoners in Tunisia in 1952 and Algeria in 1957.

Through her in-depth analysis of each of these investigations, Kuby makes important contributions to an expanding body of research investigating Europeans’ interventions into international justice in the early postwar era. In doing so she joins Francine Hirsch, whose recent book, Soviet Judgment at Nuremberg: A New History of the International Military Tribunal After World War II (2020), examined the Soviet Union’s influence on international law during the Nuremberg trials. But Kuby reveals that the CICRC’s efforts to define and combat abuses of state power differed from those that took place inside the Palace of Justice. At Nuremberg, reams of documentary evidence generally took priority over survivor testimony. In contrast, the CICRC placed survivors’ trauma and expertise front and center in all of its investigations. Kuby argues that its members struggled to agree on an objective definition for a concentration camp, relying instead on their memory of the nauseating sights, smells, and sounds of Nazi camps to come to a judgment about whether camp conditions in Franco’s Spain or French Algeria came close to Hitler’s horrors. CICRC members also avoided the language of human rights, which they believed could not adequately capture the incomparable evil of concentration camps. Instead, they put forth the practice of witnessing as an alternative means to extract generalized lessons for mankind from their experiences. Kuby argues that “It was this group’s remembered experience of trauma, not a rational appeal to a circumscribed inventory of rights, that produced the imperative to bear witness” (59). She further claims that it was a group that minimized and, at times, also problematically appropriated Jewish memory that first put victim-witness testimony on center stage, a full decade before the Adolf Eichmann trial and the subsequent “explosion of Holocaust remembrance” (134).

Despite documenting extensive abuses in all of the countries they surveyed, CICRC members stopped short of labeling any penal system other than the gulag a “concentration camp.” Kuby argues that the standard of atrocity reached by the likes of Buchenwald proved too high a bar for comparison. Challenging the claims of historians such as Michael Rothberg, she concludes that survivors’ first-hand experiences of Nazi camps did not always help, and in fact often hindered, their ability to identify and condemn injustice in unfamiliar cultural and political contexts.

Nowhere was this clearer than in French Algeria, where the CICRC faced its final, unsurmountable challenge. Several members who supported Algérie française left the group in protest of the investigation; more calamitously, it led the CIA to pull its funding. Rousset nevertheless forged ahead with the inquiry. CICRC investigators spent weeks in Algeria documenting prisoners’ physical scars and disturbing accounts of torture experienced before their confinement at the hands of the French military and police. The investigators published this evidence of torture in a blistering report for Le Monde, but it was their final verdict that France did not possess concentration camps that reverberated throughout the press and in the halls of the United Nations. Disillusioned with the group, Germaine Tillion concluded that its focus on concentration camps and, as Kuby writes, its call for “full-bore identification with victims rather than simple compassion,” had served as a distraction from the more pressing humanitarian work needed in Algeria. The end result of the inquiry was the “crumbling of the organization’s financial, political, and epistemological foundations” (194-195).

Kuby’s book is well-timed. Her analysis of the CICRC’s successes and failures offers insights for those seeking to contend with state violence in the present day. In a July 2019 article in the Dissent blog, she emphasized the contemporary relevance of the CICRC’s mission when weighing the pros and cons of labeling U.S. migrant detention facilities “concentration camps.” She concludes that while ICE compounds might not look identical to Nazi camps, this should by no means discourage political efforts to advocate for their closure. One of her central messages is that—as the CICRC’s successes reveal—victim testimony based on past trauma can inspire collective action against present injustice. Yet she warns that focusing too much attention on one “benchmark” of atrocity can lead us to permit other forms of abuse, which in the case of the CICRC “worked to excuse the inexcusable.”

Indeed, by thrusting a spotlight on police brutality in the U.S. and beyond, the Black Lives Matter movement has recently underscored our obligation to combat state violence in all its ugly permutations. It is also worth considering, moreover, how the CICRC’s model of expert-driven investigation differed from grassroots protest movements like BLM. The success of the CICRC’s model relied on Europeans’ veneration of political deportees as patriotic heroes as well as victims of Nazi atrocities. Holocaust survivors did not receive similar attention and respect until much later. Our own society’s failure to listen to survivors of racial violence contributed to the upwelling of anger and frustration that found its outlet in the BLM movement and should encourage us to reconsider who we enshrine as national heroes. By tearing down statues BLM protesters have brought this issue to the center of public debate in America. Should we view such actions as wanton property destruction, or as legitimate acts of political resistance against state violence? Kuby’s history of the CICRC encourages readers to reflect not only on how past experiences shape contemporary attitudes toward injustice, but also whose voices we should amplify as a society.

Political Survivors deserves a wide readership both for its contributions to postwar intellectual history and its relevance to current political debates. It brings to the fore central questions about resistance, remembrance, and victim-witness testimony, and would make an excellent choice for inclusion in graduate level or advanced undergraduate syllabi. 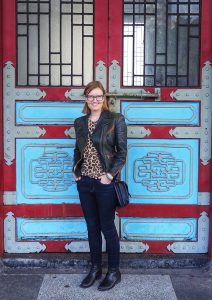 Grace Allen is a lecturer at the Chinese University of Hong Kong, Shenzhen, where she teaches courses in general education, including “The History of Consumer Culture,” which she originally designed as a Mosse teaching fellow at UW-Madison. Her current research explores the globalization of the French luxury industry after World War II.