On the Shoulders of Yitzhak Arad: A Review of The Operation Reinhard Death Camps and Paths for Future Research on Belzec, Sobibor, and Treblinka 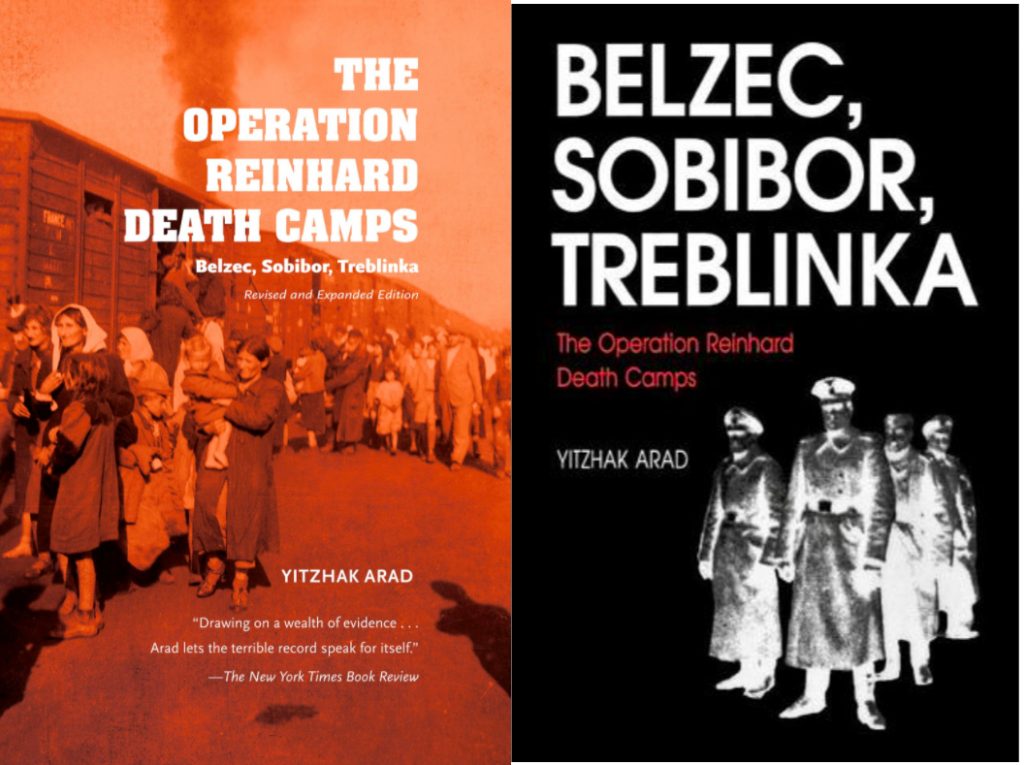 The three extermination camps of Aktion Reinhard, or Operation Reinhard, sit at the dark core of Holocaust perpetration. Using a system of gassing perfected by personnel drawn from the Nazi euthanasia program, small cadres of SS men and their Ukrainian auxiliaries at Belzec, Sobibor, and Treblinka murdered as many as 1,700,000 Jews in less than one year. Yet despite the criminal enormity of events that took place within these camps, studies of them are few in comparison to the attention long given to other locations such as Auschwitz or the Warsaw Ghetto. The recent rerelease of Yitzhak Arad’s The Operation Reinhard Death Camps: Belzec, Sobibor, Treblinka in a revised and expanded edition is all the more important as a result of this relative lack of research.

Arad, now in his ninety-third year, fought the Nazis as a partisan, retired as a brigadier general in the Israeli Defense Forces, served as a long-time director of Yad Vashem, and remains a prolific historian. Among his many other books are Ghetto in Flames: The Struggle and Destruction of the Jews in Vilna in the Holocaust (1980), The Holocaust in the Soviet Union (2009), and In the Shadow of the Red Banner (2010). His publications in Hebrew include טרבלינקה – אבדן ומרד, or “Treblinka, Destruction and Revolt,” first released in 1983. This work began Arad’s study of the Operation Reinhard camps that would eventually culminate in the present volume.

More than thirty-three years after it was first published, his original Belzec, Sobibor, Treblinka: The Operation Reinhard Death Camps (Indiana University Press, 1987) remains the standard-setting study of these three Nazi extermination facilities. This updated edition adds two new chapters, with a new section exploring the final phase of Operation Reinhard, revises statistics, and refreshes the historiographical positioning of his work to suit the present state of the field. The combination of these changes adds 88 pages.

Arad organizes the present volume in 48 short chapters divided under four parts. In “Part I: The Extermination Machine” (5-228), he covers the entire chronology of Operation Reinhard from the Nazi decision to commit mass murder, construction of the camps, operations and improvements, and finally the closure of all three camps. This part of the book is a meticulously technical reconstruction of perpetrator motivations, plans, and actions with later chapters that turn to Arad’s exploration of inmate existence within these camps. Chapter 15: “Jewish Working Prisoners” and Chapter 16: “Women Prisoners” introduce readers to the conditions endured by Jewish slave laborers forced to work in the Nazi machinery of death. Having briefly established their roles and conditions here, Arad expands on his coverage of what they endured and their reactions in Part II: “Life in the Shadow of Death” (229-86). This shorter section of the book includes six chapters that explain daily life for Jews inside the Operation Reinhard camps and how they attempted to cope with the terrible world in which they lived. Arad’s discussions of individual perpetrators, the social life of inmates, disease, and prisoner suicide provide the reader some awareness of the desperate and deadly daily existence of Jews.

In “Part III: Escape and Resistance” (287-418), Arad begins by exploring what Jews knew about the Belzec, Sobibor, and Treblinka before they arrived at the camps. In covering prior knowledge of the camps, Arad explains what few chances for resistance most Jews sent to the camps had and helps readers understand the Nazi use of misinformation and lies at every step of the deportation and extermination process. German authorities sought to keep Jews in the dark about their plans for mass murder to forestall any chance of resistance. Jews who escaped from the Reinhard camps, covered in Chapter 33: “Escapes from the Camps” (306-17), helped warn others about what awaited them if they remained in the ghettos or boarded the trains. This part of the book makes extensive use of survivor sources such as memoirs, interviews, and court transcripts to analyze prisoner plans for revolt and attempts to flee. Part III covers Treblinka and Sobibor in greater detail as these two of the Operation Reinhard camps witnessed prisoner uprisings that enabled the survival of far more former inmate witnesses.

The final major section of Arad’s updated work, “Part IV: The Final Stage of Operation Reinhard” (419-46), does not appear in the 1987 original. In this section, Arad rearranges his earlier research by moving some chapters previously in Part III and including several pages originally held in an appendix as a new chapter. His revisions here also make several small additions to his analysis of the final days of Operation Reinhard. Arad explains how and why the Nazis chose to shut down Belzec, Sobibor, and Treblinka after two prisoner revolts and the murder of the vast majority of Polish Jewry. The final three chapters describe German attempts to erase all traces of these camps and the killings of remaining Polish Jews in large-scale shooting operations called Operation Erntefest, or Harvest Festival. With these deeds complete and Auschwitz-Birkenau then in operation, Nazi genocide moved to a new phase.

The most substantial single alteration in Arad’s work are his efforts to reposition his analysis of Operation Reinhard after 33 years of research and publications in Holocaust studies. Almost 50 of Arad’s new pages appear in Part I, where he adds a chapter discussing the Nazi path toward genocide along multiple decision points and the process of gradual escalation culminating in Operation Reinhard (see esp. 5-42). In the years since the 1987 publication of the first edition, the field of Holocaust studies has largely reevaluated its understanding of the purposes behind Nazi ghettoization policy while devoting greater attention to the seriousness of abandoned ideas such as the Nisko Reservation or Madagascar Plans, and—particularly in the case of Christopher R. Browning—drilled down into the timing of Third Reich decisions to kill Jews.[1] In these revisions, Arad cites more recent work, such as Browning’s The Origins of the Final Solution (2004), and several important essays in Ulrich Herbert’s National Socialist Extermination Policies (2000), which helpfully delivers a more nuanced explanation of Nazi genocidal decision-making.[2]

Readers will find this new contextualization of Operation Reinhard most helpful for use in an undergraduate-level Holocaust course or in a graduate seminar on the perpetration of genocide. With these updates, Arad’s work now presents his research on Belzec, Sobibor, and Treblinka without contradicting current authoritative texts on the Holocaust more broadly. The core of Arad’s work beyond these introductory and concluding elements, however, remains almost entirely unchanged. Parts II and III, focusing on life within the Reinhard camps and resistance by Jewish prisoners, receive little attention. Arad’s sources are the same in these chapters, as are his questions and analysis. Given the trends in scholarship at the date of his original research for this book, the lack of an update here means that readers will not find substantial discussions of women in the camps outside of the five-page Chapter 16, while gender, sexuality, sexual relations, and other areas of more recent focus within the field of Holocaust studies are also mostly absent.[3]

The republication of Arad’s text without revisions to his core original research in primary sources highlights spaces where future work on Belzec, Sobibor, and Treblinka can ask novel questions of the survivor testimonies with which he worked. Scholars working on these camps today also benefit from a host of survivor memoir publications and oral history recordings that post-date Arad’s original research. New sources, questions, and methods along with recent archaeological work by Caroline Sturdy Colls and others opens up broad possible research horizons that Arad only briefly mentions.[4] The existence of new sources—particularly in regard to Treblinka and Sobibor—as well as current research trends such as social network analysis, spatial, or geographic, methods, memory and memorialization studies makes it possible to consider the future shape of works building on foundations built by Arad.

A few such works have already emerged with more on the way. The Polish writer Michał Wójcik’s recent Treblinka ’43 (2018) is one example of a book making use of later survivor sources to focus on resistance.[5] Stephan Lehnstaedt’s Der Kern des Holocaust (The Core of the Holocaust) (2017) brings Arad’s main contributions to German reading audiences while expanding the analysis of all three camps to include study of memory and memorialization. Arad’s present edition, unfortunately, reached publication just before the release of Fotos aus Sobibor (Photos from Sobibor), a volume exploring the recent discovery of a photo album created by a Sobibor guard.[6] Though he was unable to take advantage of these new images, they are certain to revise our understanding of that camp. My own work on resistance at Treblinka leans on the discoveries of Arad as well as later survivor oral histories and memoir sources to uncover the geographic and social networks of resistance between prisoners. In this research, I also devote greater attention to histories of women, gender, and sexual relations inside Treblinka and how these factors weighed on prisoner resistance strategies.

Arad’s new edition offers an opportunity for historians to consider how we can use his book in our classrooms in addition to how we can build upon his research. His improvements to the organization of the previous edition help make The Operation Reinhard Death Camps a book with great flexibility for assignment in coursework. Given its division in larger thematic parts and short, topic-specific chapters, instructors can easily choose stand-alone excerpts or use the entire book at a pace of reading that suits their goals. Planning assignments that pull from Arad’s book alongside recent articles that draw attention to topics he only hints at or briefly introduces offers instructors the ability to show students where the field of Holocaust studies began and where it is heading today. Teaching and research on Belzec, Sobibor, and Treblinka are certain to chart new paths, though they will continue to stand on Arad’s shoulders for some time to come. 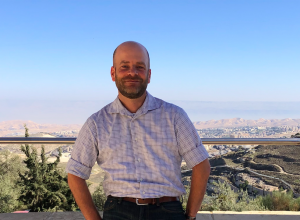 Chad S.A. Gibbs is a PhD candidate in the Department of History at the University of Wisconsin–Madison. He completed an MA in history at the University of Nebraska at Omaha and his BA in history at the University of Wyoming. His dissertation project, “Against that Darkness: Perseverance, Resistance, and Revolt at Treblinka,” adds to our understanding of life inside this camp by exploring inmate relationships—or social networks—and how prisoners leveraged these bonds to gain some measure of control over lethally restricted camp geography. Maintaining emphases on networks and space throughout, Chad’s work further delivers analysis of gender and masculinity in life and resistance at the camp while working to recover the long-overlooked experiences of women at Treblinka. In the 2020-2021 academic year, Chad will hold fellowships at the USC Shoah Foundation and the United States Holocaust Memorial Museum.