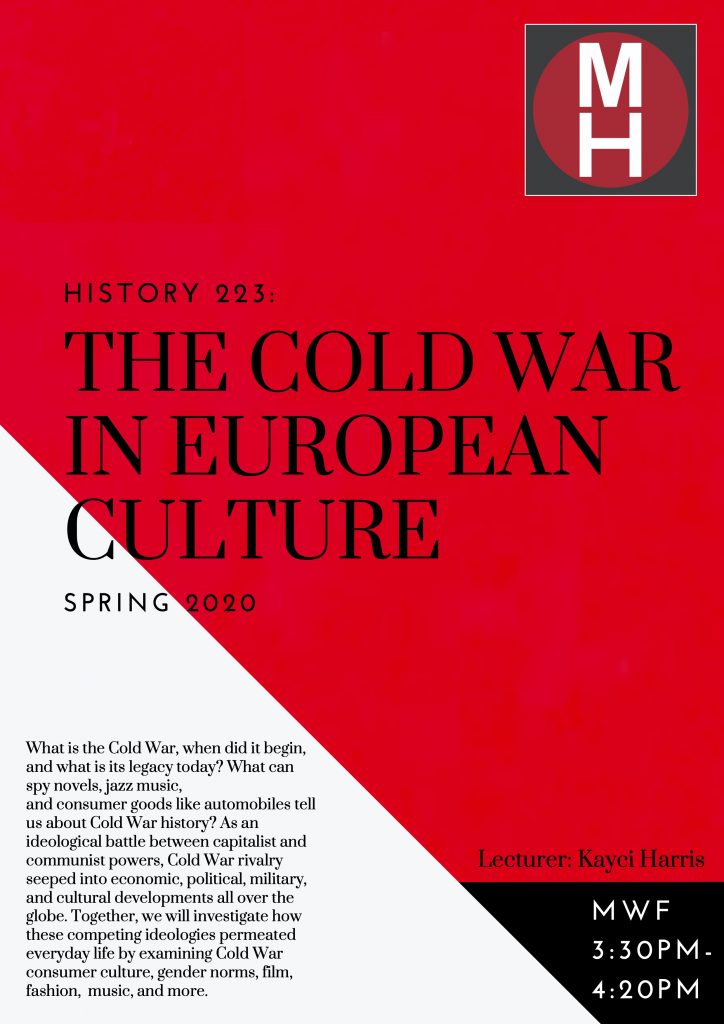 Since my early days as a history graduate student at UW-Madison, I hoped that one day I would enjoy the opportunity of teaching my very own course. Thanks to the George L. Mosse Program in History, this hope became a reality when the Program granted me the privilege of creating my course, The Cold War in European Culture, which was offered during the Spring 2020 semester.

Inspired by my dissertation research, this course investigated how entanglements of culture, politics, and economics shaped Cold War events from World War II to 1992. I was pleased that the course drew considerable interest, with the maximum number of students enrolled. Many students came to the class with their own (usually United States-focused) background on Cold War history that initially drew them to the topic. My hope was to demonstrate that Europe had its own history of the Cold War and that Cold War conflict cannot be fully understood without close analysis of cultural phenomena, such as consumer culture, gender relations, and artistic exchanges. We examined how fashion and music were shaped along Cold War boundaries. Students were especially fascinated by how youth culture and rock ’n’ roll became contested territory in Cold War cultural battles. For example, we talked about English Teddy Boys, Soviet Stilyagi, and Brigitte Bardot to understand how youth identity combined with an expanding film industry, contributing to the creation of youth cultures that were wielded or suppressed differently across the East/West divide.

Throughout the semester, students noted how the material covered in this class differed from narratives of the Cold War in American culture, where Europe was often left out of the equation. As our discussions of the Berlin Airlift, Cold War tourism, and decolonization made clear, the Cold War cannot be understood without analyzing Europe’s role. For example, we saw how, from the final days of World War II into the Khrushchev era, postwar Berlin became a nexus of tension between France, the Soviet Union, the United Kingdom, and the United States. Students were interested to find that the Berlin Wall—that historic emblem of the Cold War—was the culmination of nearly two decades of prior conflict and negotiation in which Europeans were key players. We got the chance to delve into the landscape of postwar Berlin during our reading of John Le Carré’s The Spy Who Came in from the Cold (1963), which several students highlighted as their favorite reading this semester. The book stoked fruitful discussions about Berlin’s central position in the Cold War and offered an entry point for exploring contemporary critiques of Cold War espionage. This is not to say that the United States was left out of our course entirely—for instance, students enjoyed learning about the New York-based Everyman Opera company’s 1956 tour performing Porgy and Bess in the Soviet Union in Truman Capote’s The Muses Are Heard. Our discussions reflected that cultural exchanges like this one became rich sites for debates about race, nationalism, and the relationship between economic systems and the arts—all of which were deeply ingrained in Cold War rivalries.

This semester posed some unexpected challenges for a first-time lecturer. Due to the COVID-19 pandemic, the semester ended up divided into two segments. The first half was conducted as I had planned. Initially, I was nervous about so much public speaking, but I began to look forward to giving lectures. Without my needing to do much prodding, the lectures became interactive; students asked excellent questions and sparked impromptu conversations about historic photographs and maps that were part of the lecture slides. Their excellent engagement taught me much about how to be an effective instructor and pushed me to delve deeper into the material which forms the backdrop for my own research. When papers came due, students also had a space in class to workshop and discuss their writing plans with me and their classmates. After the sudden transition to an online format, this collaborative atmosphere was challenging to maintain.

It was necessary to accept that, given the stress and upheavals of the pandemic, the plans that I had made for this course would have to be significantly altered. The primary question became: how could I lighten the demands of this course and teach with compassion in pandemic conditions while still meeting (at least most of) the learning objectives that I set out to accomplish at the semester’s start? I recorded my lectures and posted them to our course website for students to watch at their convenience. Although I created a thread for further discussion of or questions about lecture material, this space could not measure up to our spontaneous in-class discussions and did not see much traffic. It was a challenge to give lectures into a screen and send them out into the ether, with little idea of how students might react to the material. Although some students did contact me with follow-up thoughts, I missed watching them think over and absorb the material during in-person sessions, in addition to the collaborative learning atmosphere that I had worked to cultivate before the pandemic reached the U.S.

The dilemma of how to conduct our discussion sections on assigned readings also required flexibility. I had initially planned to carry out all discussions “live” on BB Collaborate Ultra at the time that our sessions usually met. However, it quickly became clear that, for a variety of reasons related to the pandemic, many students were unable to attend weekly live sessions. To compromise and better accommodate students’ needs, I halved the number of live sessions, alternating these with written discussions in which each student carried out a specific, assigned role to contribute to the conversation (and, of course, could freely participate elsewhere in the discussion). I appreciated that written discussions provided space for everyone to participate, even typically quieter students, since the written format did not face the time constraints of in-person sessions. This made me wonder how I might incorporate this form of discussion into my courses in the future, even once the pandemic has passed.

In my original outline for the course, I had planned for students to spend the last third of the semester completing a final project that would develop their research skills and hone their ability to make an argument incorporating a variety of sources. I had scheduled a session at Memorial Library’s Special Collections, where we would examine and discuss select Cold War primary sources in person and learn some tips on finding sources that would help students answer research questions that interested them. This session would provide a framework for their final project, in which they would make an argument about the Cold War using the primary source of their choice (e.g., a novel, film, memoir, or archival document) and a small number of secondary sources. I had hoped that this assignment would give students a taste for the excitement of holding a document from the Cold War era and the tactile experience of research. By mid-March, the transition to online classes and the closure of campus libraries posed obvious challenges to carrying out this final project.

In place of this project, I asked students to conclude the class by reviewing a European film or novel (accessible online) from the Cold War era, from the perspective of a contemporary of the Cold War. They were required to indicate when the review would have been “published,” in addition to the nationality and political slant of the reviewer—with the goal that they incorporate material from readings and lectures across the semester to historicize and analyze their source from the perspective of a European who lived through the Cold War years. This assignment gave students a chance to work closely with a primary source, show me what they had learned about the Cold War in Europe, and have some fun getting into character. The were intellectually invigorating, thoughtful, and sometimes hilarious. For instance, one student wrote a passionate review of a Soviet film by a devoted French Communist; another reviewed a British spy thriller, unpacking Britain’s complex Cold War alliance with the U.S. Students reviewed Cold War films from a variety of countries, including Solaris (USSR, 1972), Doctor Strangelove (UK, 1964), The Third Man (UK, 1949), À bout de souffle (France, 1959), and Ashes and Diamonds (Poland, 1958). Others wrote from the Soviet perspective on French or British sources, in the process exploring Nikita Khrushchev’s effort to reinvigorate cultural relations with the West. Without the abruptly imposed constraints of the pandemic, I likely would not have crafted this assignment, but it proved to be a fun and effective pedagogical tool that I would consider using again in future classes.

Perhaps even more than would have been the case during a typical semester, this lectureship enabled me to experiment and grow as an instructor. I improved the structure and delivery of my (recorded and in-person) lectures, tested a variety of formats for leading effective discussions, learned the basics of online teaching, and—above all—accepted the importance of flexibility in the face of students’ needs and changing teaching environments. I am certain that this first, challenging semester of solo teaching will leave an indelible mark on my pedagogical methods going forward, and I am grateful to the George L. Mosse Program for this opportunity. I would also like to thank Stan and Linda Sher, who kindly provide funding to support the Mosse Lectureship, and Professors Grace Allen and Elena McGrath, whose guidance and support helped me make needed adjustments to my course and assignments during the tricky transition to online teaching. 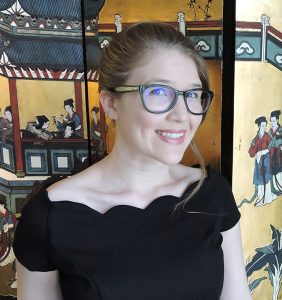 Kayci Olson Harris is a Ph.D. Candidate in European History at UW-Madison. She received her M.A. in History from UW in 2015 and an M.A. in Social Sciences from the University of Chicago in 2013. She completed her B.A. in History and French at the University of Georgia in 2012. Her work examines the Cold War through shifting cultural and political relations between France and the Soviet Union. She is currently writing her dissertation, “Pas de deux: Ballet exchanges and Franco-Soviet cultural interaction in the 1950s-70s,” which explores how notions of gender, aesthetics, consumer culture, and ideology shaped Cold War divisions. Her work seeks to integrate a grassroots perspective into transnational history by analyzing how French and Soviet journalists, performers, audience members, and others made sense of renewed cultural interaction in 1953.