As the COVID-19 crisis hit the United States and our students were sent home to complete the semester remotely, my colleague and I were teaching an introductory lecture course called “History of the Present.” The class seeks to introduce new students from across the university to historical thinking more broadly construed than it is in their high school curricula. We cover a range of contemporary topics looking beyond the immediate histories so often covered in op-eds and other reporting, focusing instead on the histories leading to our categories of understanding contemporary experience. My last lecture was announced in the syllabus as an exploration of the representation of historical trauma in entertainment film. In light of the pandemic, I decided instead to offer a review of the course themes and materials through the lens of what the students and all of us are currently living through.

The course had offered the students a different way of considering the history of the environment as a concept, and the shifting ways that human beings perceived their own relationship to nature. For this, we found useful the recent work of Bathsheba Demuth on the contrasts between Russian/Soviet and American approaches to the management of the Bering Straits region from the 1870s to 1950 and the impact of these on its ecology and on their respective states. My colleague Valerie Kivelson—an illustrious early modern Russia scholar now working on Siberia—had offered a different example, namely that of sable trapping in that region. In a relatively short period, by the end of the early 17th century, sable had been effectively tapped out of large areas of western Siberia. Subjects from the period did not describe this depletion in terms of overtrapping. Rather, they recorded that the sable had suddenly “left,” as though migrating on their own. A holistic sense of “the environment” as a kind of organism which not only affected us, but which our actions affected, was simply not available to them. Our current conceptualization allows us to understand these interactions differently, even if our response to this consciousness may be uneven for various reasons.

Looking at any of the many images of reduced pollution in the wake of the current lockdowns (for example, a photograph of an empty Venice with clear, blue canals), the class was reminded of the many reports on the effects of the worldwide efforts at reducing social activity including many forms of industry and travel on the environment. We now considered what is known (albeit rarely mentioned in reports most people read) about the relatively recent proliferation of zoonotic diseases emerging from various human actions from deforestation to globalization, increased human population and encroachment on animal habitat, mass factory production of meat and concentrated techniques of food production. Whether the knowledge of our collective vulnerability due to human practices like these—some of them recent, some gradually building—will lead to structural change to protect ourselves is an open question.

We had found it important to clarify for class participants the various political systems and the corresponding ideologies that buttress them. We now used this as an opportunity ask students to speculate on how different ideological perspectives may bear upon how people understand what is happening to them? In the U.S. itself, we have ample examples of individuals filtering their understanding of the relationship of state to nation through the lens of COVID-19 policies; we have evangelical adherents relating differently to public harm-reduction measures than citizens identifying themselves as socially progressive. How have international responses to the crisis varied, and how can we understand responses not merely as top-down, state initiatives, but as reflections of popularly held ideological positions?

Most relevant to George L. Mosse’s work and the Mosse Program in History, the class covered topics including the history of gendered, sexual and raced identities. As well as the historical formation and transformations of these categories. To contemporary comparisons of the current health threat to the HIV/AIDS crisis in the 1980s, students knew that these were quite different in many ways: chiefly, the absolute silence of the U.S. government and near silence in the public sphere on an epidemic that struck urban homosexuals as a catastrophe was met with ACT UP protests for awareness and action, whereas now the din of public sphere discourse on COVID drowns out nearly everything else, and U.S. protests come instead from denialists. We had offered histories of race and of so-called scientific racism as alternative backgrounds to our Black Lives Matter movement. In both of these cases we had foregrounded the matter of citizenship and Gayle Rubin’s notion of the “charmed circle” of social inclusion and the “outer limits,” or those excluded from full social belonging and citizenship rights (we had compared and contrasted the Nuremberg Laws to Jim Crow, for example). The grim statistics on the vastly disproportionate toll the novel corona virus has taken on black communities (in my own state of Michigan, black Americans have had fatalities of 21.6 per 100,00, as against 2.6 of whites) are understood in a different light in relation to these histories and theories.

We had read and discussed Michel Foucault’s thought as part of a module on knowledge regimes and the historicization of truth, including the latter’s relationship to power. Now we went back to his notion of biopower. The transition from the power of the sovereign over life and death, they had learned, becomes increasingly penetrating as the modern state takes on the role of supporting life in a newly conceived “population.” Hence, we could ask students to consider various extrapolations of the theory to our contemporary situation. A useful example we introduced for discussion was Giorgio Agamben’s initial (and never quite renounced) response considering the “disproportionate reaction” to the “alleged epidemic of the corona virus,” itself really much like the “normal flu.” And yet, interpreted another way, a state’s interventions to stem the rate of spread of the virus and its fatality rate is no more a confirmation of the historical evolution of biopower than is the choice to ignore it and let nature run its course. While the former suits Agamben’s analysis of states of emergency, the latter also represents control over the population in its engineering of a culling of the vulnerable, including those outside of the charmed circle of full belonging.

One would of course never wish for students to have to live through a moment that causes all of us to rethink our place in the world and to contemplate alternative futures as the result of mass calamity. The least we can do as educators, though, is to offer them the means of understanding to navigate that reflection as critical and informed students of history. 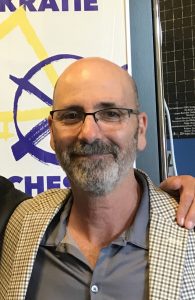 Scott Spector is the Rudolf Mrázek Collegiate Professor of History and German Studies at the University of Michigan. His research covers modern Central European cultural and intellectual history, including the histories of nationalism and of sexuality.

A version of this blog post appeared in the newsletter of the IWM/Institut für die Wissenshaften vom Menschen, where the author held a visiting fellowship in Spring, 2019.