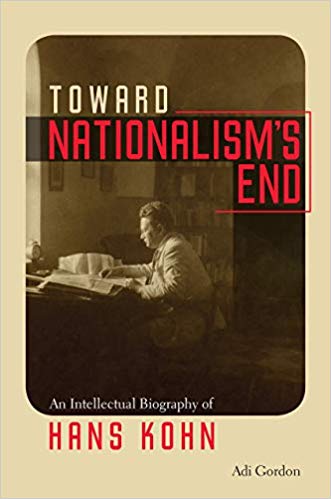 It is surely no easy feat to write the intellectual biography of someone whose work traversed as many places, political positions, and ideological commitments as did that of American-Jewish historian and philosopher Hans Kohn (1891-1971). Yet this is precisely what Adi Gordon sets out to do in his new book. Kohn is a tantalizing figure for a biography of this kind, not least because different elements of his life and work might appeal to those on all ends of the political spectrum. His sharp criticisms of Zionism and the State of Israel gain him attractors of the left, while his enduring support for US and NATO power during the Cold War admirers on the right. Such is the cornucopia of positions that Gordon guides his readers through. And, attesting to how history is instrumental in shaping ideas, Gordon consistently evaluates the many tensions and struggles of Kohn’s work in their historical and political context.

The book is organized chronologically around Kohn’s life and work from his upbringing in multicultural Habsburg, Prague, and his early Zionist writings, through his groundbreaking studies on nationalism, and to his later period in America. Throughout, Gordon carefully reconstructs the conditions under which Kohn’s ideas developed and uses these to shed light on his various ideological transformations. It is the early chapters, however, where Gordon’s work truly shines. In them we find a rich and layered reconstruction of Kohn’s early life and intellectual milieu; of his deep, if not uncomplicated relationship to Jewish philosopher Martin Buber (1878-1965); and of his activism on behalf of the Bar Kochba Association. The period was marked by Kohn’s efforts at articulating a spiritual Zionism, or what the Bar Kochba group called a “nationalism of inwardness,” which was nourished by Buber, Ahad Ha’am (1856-1927), and others. These visionaries of a Jewish spiritual renaissance never aspired to statehood, however; instead they were focused on reclaiming their Jewishness, a quest for authenticity, and for igniting a religious renaissance. Their Jewish question, Gordon tells us, was a personal rather than a political one, a religious drive for the unattainable rather than for any political goals. It was to be transgressive and subversive. Sabbatianism, for them, as it was for Kabbalist scholar Gershom Scholem (1897-1982), was a climactic and heroic movement of Jewish renewal, rather than its collapse. Here, Gordon’s account is as vibrant as one imagines the debates of the time were and we find an intimate account of the various personalities, questions, terms, and conversations that abounded across the pages of journals, lectures, and personal correspondence.

During World War I, Kohn was taken captive as a POW and imprisoned in Russia for the remainder of the war. As Gordon illustrates, these years were critical for his intellectual and political development, and it is no surprise that Kohn would refer to them as the “decisive years of my life” (61). During this time, Kohn continued to read and write, almost voraciously in fact, and led classes on Zionist thought for his fellow prisoners. Ultimately, the war, Gordon tells us, “engulfed him in the political” (57). Upon his return to Europe, Kohn had lost the spiritual, almost anarchic vision of Zionism that had fueled his early writings and his outlook had become thoroughly politicized. “His Zionism still spoke the language of religious renewal, but its urgency lay clearly in the realm of a new world order, in questions of war and revolution in the twilight of colonialism” (88). For the next decade, Kohn sought to articulate an alternative vision of Zionist ideology, one rooted in a Jewish political vision for social justice and the recognition of the need for a binational state for Arabs and Jews. Ultimately, as Kohn’s vision for a binational state slowly disintegrated, he broke all ties with Zionist movement. Concomitantly, however, this was also the period when Kohn wrote his first texts on nationalist movements and began his career as a founding scholar of nationalism, culminating with his magnum opus The Idea of Nationalism: A Study in Its Origins and Background, published in 1944. It was at this point too that Kohn developed his influential and oft-criticized theories of civic and ethnic nationalism.

Almost simultaneous with his break with Zionism and together with his move to America, Kohn underwent another drastic ideological transformation. If Kohn’s initial explorations of nationalism were anti-liberal in their leanings and driven by a criticism of Western liberalism, his “break with Zionism marked the beginning of his much broader liberal turn” (165). This involved a reorientation towards American liberalism, a commitment to Cold War conservative politics, and the attempt at resuscitating what Kohn saw as a failing, yet still salvageable liberal West. The central problem, for him, as well as its solution, lay in the embrace of a forgotten and richer past, one whose essence would outlive the current moment and indeed might save it. Far from his early socialist leanings, Kohn was now praising capitalism, individualism, and liberal nationalism. “The core of Kohn’s worldview,” Gordon suggests, “and of his studies of nationalism throughout the second half of his life was the belief in progress, Western in origin and globally applicable” (227).

If it is occasionally tempting to find an explanatory through-line, a theoretically consistent reason that might explain the various twists and turns of Kohn’s intellectual and political life—the two are never far apart for him—Gordon resists such gestures. Instead, we find a nuanced and ever-changing narrative that accounts for the specifics of place and time, of historical events and their indelible impact on thought and politics. Gordon does, however, occasionally offer general “phases” that help characterize Kohn’s intellectual project: His earlier Zionist leanings marked what Gordon calls his “oriental phase” and the allure of history; the mid 20s and 30s marked a “bridging phase” where the modernizing east held out greater promises; and finally there was his “occidental phase” where Western nationalism became the standard and the norm.

The sheer breadth of Kohn’s work and its careful reconstruction by Gordon in Toward Nationalism’s End will surely appeal to a variety of readers. In Jewish studies alone, scholars of German-Jewish thought and history will find much of interest in its early sections; while scholars of American Judaism will take note of Kohn’s Jewish activism in America with the American Jewish Committee and his attempt at articulating a version of American Judaism disentangled from Zionism. However, for those seeking a deeper understanding of nationalism and its (many) ends, one might look elsewhere. Though Gordon tells us early on that the text will be a story of nationalism told through one of its greatest theoreticians, the emphasis in the text is on Kohn’s life itself more so than on what it may tell us about nationalism in general.

Gordon notes that Kohn’s oeuvre always included two seemingly antithetical forms: there were the rigorous studies that critically analyzed their subjects on their own terms, and there were simultaneously idealizing works that, even if beautifully crafted, often conflated creed and practice and failed to be convincing. In reading Gordon’s excellent biography, at times one wonders which form Gordon’s own relationship to Kohn takes. Though he does offer the occasional criticism, Gordon is less interested in critiquing Kohn’s ideas than in presenting them to the reader. While this serves an important, and I think correct, methodological impulse, it also leaves readers wondering what, if anything, one is meant to take away from the text. Are readers meant to leave with a newfound vision of a binational Palestine? A renewed appreciation for Kohn as an invaluable theoretician of nationalism? A warning about the seduction of American liberalism? All of the above? Gordon does not tell us.

I would not go as far as another reviewer who suggested that “it is, in the end, impossible to see what Kohn has to contribute to ongoing reconsiderations of Zionism… [and that] for all of his experience and accomplishments (not least during the Cold War), Hans Kohn is one of those extraordinary figures whom we can safely leave behind us.” Yet I too can’t help but wonder about the critical ramifications one is meant to draw from the text. Certainly, there are the eerie parallels to our own times, such as when Gordon writes that:

The betrayal of Europe, then, was both a personal tragedy and an intellectual challenge for Kohn, and it reframed his academic and political agendas in the mid–1930s and increasingly into the 1940s. What, ultimately, is fascism? What does it want? What brought it about? What explains its survival, global spread, and success? How can it be stopped and ultimately eradicated? To combat fascism, there was a need to better understand it, and Kohn willingly participated in this task, which eventually brought about his refined theory of nationalism. (180)

One might just as easily pose such questions and research agendas today—yet, as far as I can tell, it is not in the service of reclaiming Kohn as a theoretician for our time that Gordon sets out to write. Perhaps, one might leave with the slightly more modest claim that Gordon opens his text with: to develop an appreciation for “how myriad ideologies and agendas constituted and relied on ideas of nations and nationalism” (3). In that, the book certainly succeeds. 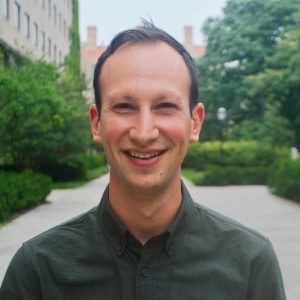 Mendel Kranz is a fourth year Ph.D. student at The University of Chicago Divinity School. His interests include Modern Jewish Thought, Postcolonial Studies, Continental Philosophy, and Critical Theory. His dissertation project explores the intersection of postcolonialism and Jewishness in North Africa and France by examining the effects that postcolonial criticism had on Jewish writers’ self-fashioning and how it challenged them to renegotiate their own relationship to the legacies of European fascism, colonialism, and racism. He takes up a similar line of inquiry in his article, “Postcolonial Zionism: Theological-Political Paradigms in Levinas and Memmi,” published in Hebrew Studies. He is a recipient of the Northwestern University Social Science Research Council (SSRC) Dissertation Proposal Development Fellowship. He also serves as coordinator for the Jewish Studies Workshop and is on the Student Advisory Board for the Greenberg Center for Jewish Studies.