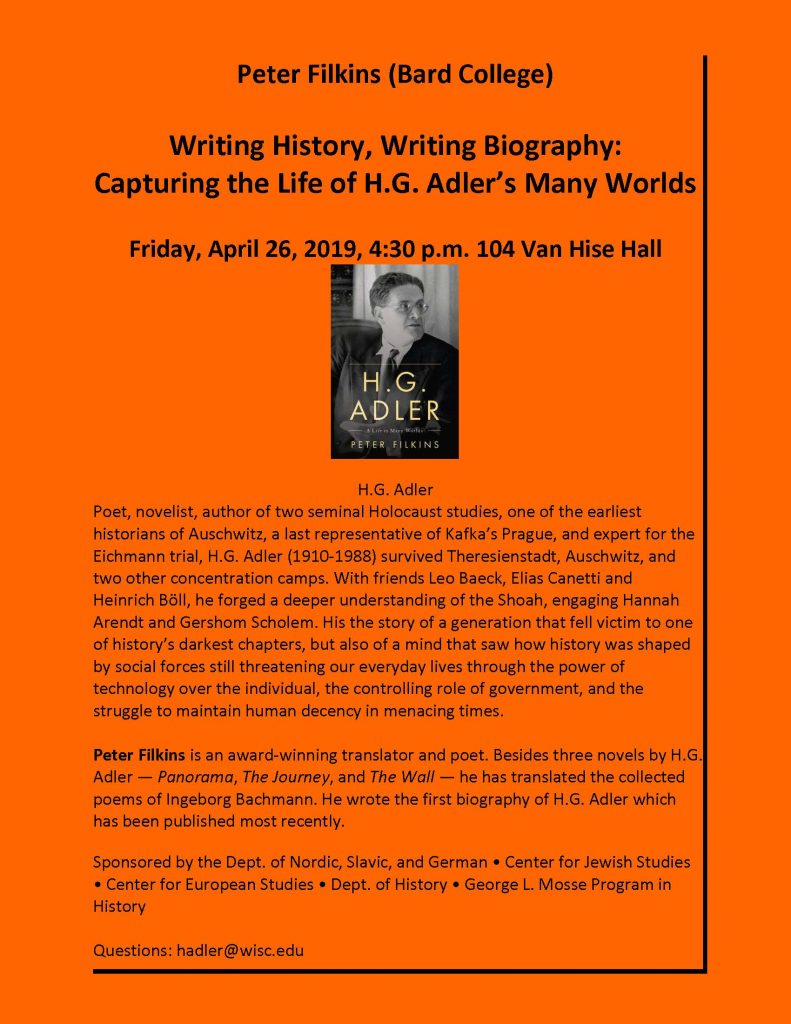 Primo Levi, Elie Wiesel, and H.G. Adler. The lives of these three individuals share much in common, though their legacies diverge in one important regard. Levi and Wiesel are well-known Holocaust survivor-authors while Adler’s early contributions to Holocaust history as well as his creative literary responses remain in comparative obscurity. Indeed, the memoirs of Levi and Wiesel often appear on the reading lists of courses on the Holocaust at the same time as several of their literary works—including Survival in Auschwitz and Night—continue to attract a considerable readership. In contrast, Adler’s monumental historical study Theresienstadt 1941-1945 is known primarily to specialists while his novels and poetry have had to wait decades for wider audiences in German and English translation.[1]

Poet, translator, and scholar Peter Filkins has been instrumental in bringing Adler’s life and work to the English-language audience—most recently, in the new biography, H.G. Adler: A Life in Many Worlds (Oxford University Press, 2019).[2] Already the translator of Adler’s novels The Journey, Panorama, and The Wall, Filkins brings a rare depth of knowledge to his subject. The present work also displays an endearing attachment to Adler in addition to a thick understanding of the man’s inspirations, his life, and his conception of self.[3]

Born in Prague in 1910, Adler went on to become a poet, novelist, and scholar. From the vantage point of that contested and often imperiled city, he bore witness to the catastrophic impacts of war, occupation, and the Holocaust. Adler survived 32 months in Theresienstadt, deportation to Auschwitz, and slave labor in two further camps. Along this tortured journey he endured the loss of eighteen family members, including his first wife Gertrud on the day they both arrived at Birkenau.[4]

In researching the present book, Filkins draws on the extensive sources that Adler created and collected during the Holocaust as well as his wide ranging postwar writing.[5] A prolific scholar and letter writer for most of his life, Adler left behind a wealth of material that Filkins uses to pinpoint and explain the moment Adler created each of his works. The existence of correspondence, early drafts, and vast collections of notes further allows Filkins to juxtapose Adler’s private thoughts and published works.[6]

Insights into the inspirations for Adler’s creative and scholarly processes derived from cross-referencing archival material and completed manuscripts are among Filkins’ most interesting and important contributions. In one example, Filkins analyzes the evolution of Adler’s “Traktat”—an experimental theological treatise—in both the work’s social and historical context. Adler developed his thoughts on religion and spirituality, in part, over a series of letters to his first wife Gertrud. Access to this correspondence along with early versions of the “Traktat” give Filkins the ability to trace the development in one of Adler’s most personal works. Strong archival materials also allow Filkins to comment on the formation, influences, and gradual change of Adler’s relationship with Judaism.[7]

The multiple tragedies of Adler’s early years directed the focus of his later scholarly works while permanently shaping the tone and content of his artistic expression in prose and verse. This biography explains how Adler’s experiences led to his self-definition as a “participant-witness” and the ways in which this hyphenated term evolved to include various meanings over the course of his life.[8] Filkins brings attention to these meanings by use of a generally chronological organization with some movement backward and forward in time and topic across thematically-anchored chapters. Thus, for example, chapters named “The Survivor,” “The Writer,” “The Scholar,” and “The Witness” stray from a strictly linear progression in time. Speaking of Adler’s historical scholarship in a chapter entitled “The Survivor” or profiling his Holocaust experiences under the heading “The Writer” allows Filkins to show how one identity intersected, informed, and coexisted with the other. In employing this technique, Filkins subtly brings his readers to the realization that Adler never held only one role or identity at a time; he was rather the survivor-writer-scholar-witness—and more—all at once.

Adler’s most formative experience as participant-witness was doubtless his lengthy imprisonment at Theresienstadt.[9] Filkins’ biography, accordingly, devotes considerable space to a discussion of the character and evolution of this place as Nazi leadership moved ever closer to the Final Solution. Filkins states that “to understand Theresienstadt one needs to understand what it was and what it was not.”[10] In this biography, readers come to understand the ways Theresienstadt differed from standard concentration camps and why Filkins insists it was also “not a ghetto.”[11] Importantly, Filkins does not settle on a single categorization or title for Theresienstadt, rather leaving its contradictions to speak for themselves. He lists the names Nazi authorities gave the facility—from Altersghetto to Prominentenghetto and, most disingenuous of all, Judenstaat—before explaining how each of these was a lie. In Filkins’ treatment of Theresienstadt, the reader sees how this so-called ghetto functioned at times like a transit camp and at others as something resembling a concentration camp. Though it was home to an oft-discussed effusion of Jewish cultural life in which Adler himself took part, Filkins also delivers the facts and figures to show how very lethal this place was all the while.[12]

Indeed, the place Adler referred to as “the most hellish ritual mask that death ever wore” defied understanding by its prisoners during its existence just as much as it defies simple analysis by postwar historians.[13] The deadly ruse of referring to Theresienstadt as some qualified form of ghetto, as Filkins makes clear, is a prime example of the euphemistic destruction of truth and meaning that walked hand in hand with destruction of life in the Shoah. Adler documented and resisted this Kafkaesque world as he endured its increasing dangers and privations. Ever the man of letters, he fought back against the Nazi assault on life, language, and reality in part by appending an over 200-page glossary of Nazi terms at the end of his Theresienstadt 1941-1945. As participant-witness, he began collecting his list of terms and other primary sources despite not always believing he would personally make it out alive.[14] Adler’s record of Theresienstadt parallels the more famous collection of sources on the Warsaw Ghetto carried out by Emanuel Ringelblum and his Oyneg Shabes underground archive.[15] These materials would eventually support Adler’s Holocaust scholarship and his important—yet once again largely unheralded—role as a consulting expert during the pretrial investigation of Adolf Eichmann.[16]

Aside from a lingering wish that Filkins had covered Adler’s family life and personal relationships in greater detail, H.G. Adler is a strong testament to the contributions and lasting importance of its subject. Filkins brings his impressive knowledge of Adler’s works to his analysis of the man and his life’s work in a way few others could. In truth, this review could easily be written a second time from the perspective of a literature scholar without repeating much of what I cover here. Such a review might focus on Filkins’ treatment of Adler’s prose and poetry as artistic expression or seek to highlight in greater detail the subject’s place among better-known authors of early post-Holocaust literature. Adler’s hyphenated life and varied works naturally make it possible to discuss a book about him in multiple ways. All connected, yet each with its own significance. General audiences, scholars of the Shoah, Jewish studies, comparative literature, and the cultural history of memory—among others—should find it a fascinating and engrossing read. I can only hope that it will continue to draw attention to the life and works of H.G. Adler as Peter Filkins desires. 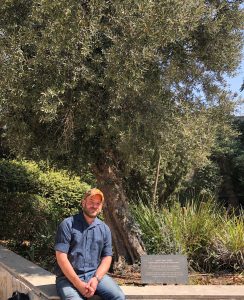