For George L. Mosse, the historical and the personal were intertwined. Born in 1918 to a prominent German Jewish family, Mosse fled in 1933 to Switzerland and eventually to the United States. There, he became a prolific historian, writing more than two dozen books on Nazism, nationalism, German Judaism, and masculinity. Mosse made a lasting mark on the field of modern European history, shaping not only the cultural turn in the historiography, but generations of students. To mark what would have been Mosse’s 100th birthday, scholars gathered in Berlin from June 6-9thfor a conference to reflect critically on his life, his scholarly legacy, and the enduring utility of his work. Entitled “Mosse’s Europe: New Perspectives in the History of German Judaism, Fascism, and Sexuality,” the conference highlighted how historians are building on Mosse’s insights to pioneer new approaches to the study of violence, othering, and sexuality.

George Mosse’s best-known work on modern Germany found inspiration from the experiences of his family, and it is here that the conference began. George’s grandfather was Rudolf Mosse, media magnate and owner of the high-profile Berliner Tageblatt. The Mosse media empire granted George a comfortable upbringing, but it also made the family into a symbol that Nazi leaders mobilized in antisemitic propaganda. In 1933, the family fled into exile; its property seized by the Nazi state. Efforts to recover that property are ongoing, as Mosse’s nephew, Roger Strauch explained alongside Meike Hoffmann (Freie U. Berlin), who runs the Mosse Art Research Initiative that aims to recover the family’s once-extensive art collection. The day’s presenters highlighted the importance of such work: As Frank Mecklenberg (Leo Baeck Inst.) explained, Mosse was emblematic of a ‘meteoric’ rising Jewish middle class who profoundly shaped Berlin’s cultural milieu but who were largely erased from history and public memory by the Shoah. Elisabeth Wagner (Humboldt U.) highlighted how enduring this erasure has been by tracing the still-absent topography of the Mosses and other Jewish families in Berlin.

It was Mosse’s wit and intellect, however, that made his name as a historian. Mosse earned a PhD from Harvard on the history of early modern England, but by 1955 he had moved on to the University of Wisconsin and, like other émigré intellectuals of his generation, to the task of understanding the roots of the German catastrophe. In Madison, Mosse made his greatest contributions as a scholar and a teacher. As his former student Steven Aschheim (Hebrew U.) explained in the keynote that opened the second day of the conference, Mosse was exceptional in both roles. He did not, like other scholars, delve into the mechanics of the Shoah, but instead focused on the cultural and ideological building blocks that rendered it possible. One of Mosse’s major contributions, affirmed Aleida Assmann (U. Konstanz) in the conference’s closing remarks, was that he examined the shared practices, symbols, myths, and daily habits that constructed the norms of belonging and otherness. By breaking with conventional periodizations and widening his scope beyond Jews alone, Mosse “de-ghettoized” Jewish history, argued Aschheim, and highlighted the links between antisemitism and other forms of othering in modern Europe.

Mosse’s experiences shaped his unique approach to history and reflecting on that approach provided a fruitful point of departure for many of the presenters. David Sorkin (Yale) noted that Mosse knew intimately how narratives of Jewish emancipation had distorted the historical reality of European Jews; the awareness led him to place the concept of Bildung (self-cultivation) at the center of the German-Jewish experience. But Sorkin also suggested that Mosse and other historians have not fully conceptualized emancipation as a historical phenomenon. He argued that we should view emancipation less as a linear process than as something cyclical, recurrent, and ongoing, and to do so, we must expand the geographic frame of analysis well beyond central Europe. Darcy Buerkle (Smith) similarly delved into categories Mosse left aside. As Buerkle noted, Mosse was a keen critic of middle-class morality precisely because he was ‘othered’ in multiple ways: both as a Jew, and a gay man. Although Mosse came out later in life and his work came to focus on sexuality, Buerkle argued that Mosse’s memoirs and personal papers also reveal that he minimized his own experiences of sexual repression and antisemitism as an American academic because he too feared losing respectability. To write the history of Mosse’s life, she argued, historians must look not only to what he recorded, but to what he did not.

This focus on sexuality and its ties to othering and violence constituted a major thread woven throughout the four days of the conference. It also offered some of the most innovative research. Anna Hájková (U. Warwick) asked how queer theory and more attentiveness to sexuality might open new avenues for the study of the Holocaust. Others focused more explicitly on sexual violence. Mary Louise Roberts (U. Wisconsin) argued that rape accusations constituted a key site for contesting American power at the end of World War Two in France and Great Britain, but that the meanings assigned to sexual violence differed substantially because of the divergent colonial imaginaries of the two countries. Stefanie Schüler-Springorum (Zentrum für Antisemitismusforschung) asked why public violence against German Jews erupted well before war hardships set in and suggested that antisemitism attained its most fevered pitch when anchored in the sexed and aged bodies of othered individuals. Elissa Mailänder (Sciences Po) examined how the norms of everyday sociability, opportunities for professional or economic advancement, and workaday routines helped enable German men and women working at Majdanek to accommodate themselves to murder. Regina Mühlhäuser (Hamburg Foundation) probed why sexual violence is so destructive to the social order and offered methodologies for parsing whether such violence was incidental or systematic in a given conflict.

As conference organizer Atina Grossmann (Cooper Union) explained, these presenters did not always appear side-by-side – an intentional decision meant to avoid segregating gender historians or creating all-male panels. Nevertheless, they offered a coherent picture of how historians are moving away from strictly functionalist, ideological, or structural explanations of violence and othering by examining the role played by embedded cultural norms and practices. Other presenters shared this approach: Udi Greenberg (Dartmouth) examined how ecumenism helped draw Protestants and Catholics into supporting the Nazi state, while Michael P. Steinberg (Brown) traced the lingering Protestant-Catholic antagonisms that shaped German antisemitism. Stefanos Geroulanos (New York U.) and Marc Volovici (U. London) each examined how language shaped politics, and Robert Zwarg (German Lit. Archive Marbach) probed photographs of post-1945 Berlin. Collectively, the presenters demonstrate the critical avenues that cultural analysis continues to open for the study of the twentieth century.

The conference also carried these analyses into the present day. Mosse wrestled with the question of what motivated individuals to participate in mass politics; something which he wrote about in his books The Crisis of German Ideology (1964) and The Nationalization of the Masses (1975). Several scholars asked how this early work on fascism might shed light on the populist politics that dominate our current moment. Enzo Traverso (Cornell) drew on Mosse’s work to offer a theoretical definition of fascism as a form of revolutionary modernism. Mary Nolan (New York U.) posed the question directly – is right-wing populism fascism? She offered a deeply nuanced analysis of the ways in which far-right parties deploy a transnational language of gender that relies upon notions of biological determinism without openly resorting to biological language – something that in her view explains both the obsession of far-right parties with gender politics and their ability to draw in new members from other conservative parties. Andreas Huyssen (Columbia U.) offered a sweeping comparative analysis of the ideologies of the contemporary far right and interwar fascism, arguing that social media has created new avenues for creating mass participation based on resentment. Mosse’s warnings about the fragility of the liberal order did not seem far from the minds of conference participants, who raised them several times over the four days in Berlin.

The final day of the conference was dedicated to current and former fellows of the George L. Mosse Program in History at the University of Wisconsin-Madison and Hebrew University, who presented new work on diverse subjects. In a remarkably well-matched panel, Adi Armon (U. Wisconsin), Arie Dubnov (George Washington U.), and Adi Gordon (Amherst) each offered a meditation on Mosse’s intellectual genealogy and how Mosse’s theories about Zionism and nationalism are still useful for understanding both. Ethan Katz (U.C. Berkeley) presented innovative new work on Jewish insurgency in Algiers during Operation Torch and the ways in which it destabilizes historical narratives of the Holocaust and colonialism. Rebekka Grossmann (Hebrew U.), David Harrisville (Furman U.), and Sarah Wobick-Segev (Hebrew U.) presented on German-Jewish photojournalism, Nazi ideology in the Wehrmacht, and secularism and religious change, respectively.

As Aleida Assmann (U. Konstanz) noted in her closing keynote, it was George L. Mosse’s ‘outsiderdom’ that allowed him to turn such a critical eye toward the ideologies of the twentieth century. But as the pointed insights and warm memories expressed throughout the duration of the conference made clear, Mosse’s intellect and humanizing character helped him to bridge that status. Mosse aimed to create a scholarly bulwark against illiberalism and irrationalism, and the three generations of scholars present attest to his success in doing so. One hopes that George L. Mosse’s insights and those of the scholars whose work was on display in Berlin this past June continue to provide vital insights into the nature of mass politics, othering, and violence – particularly at a moment when such processes seem so ascendant.

Full details on the conference and its participants can be found here.

The conference papers will appear in a forthcoming publication from the University of Wisconsin Press George L. Mosse Series in the History of European Culture, Sexuality, and Ideas. 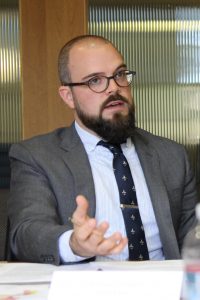 Terrence Peterson is Assistant Professor of History at Florida International University . He earned his PhD in history from the University of Wisconsin-Madison, where he was a Mosse Fellow. He is currently finishing his first book, tentatively entitled Hearts and Minds: The French Army, the Algerian War, and the Making of Modern Counterinsurgency, 1954-1962.