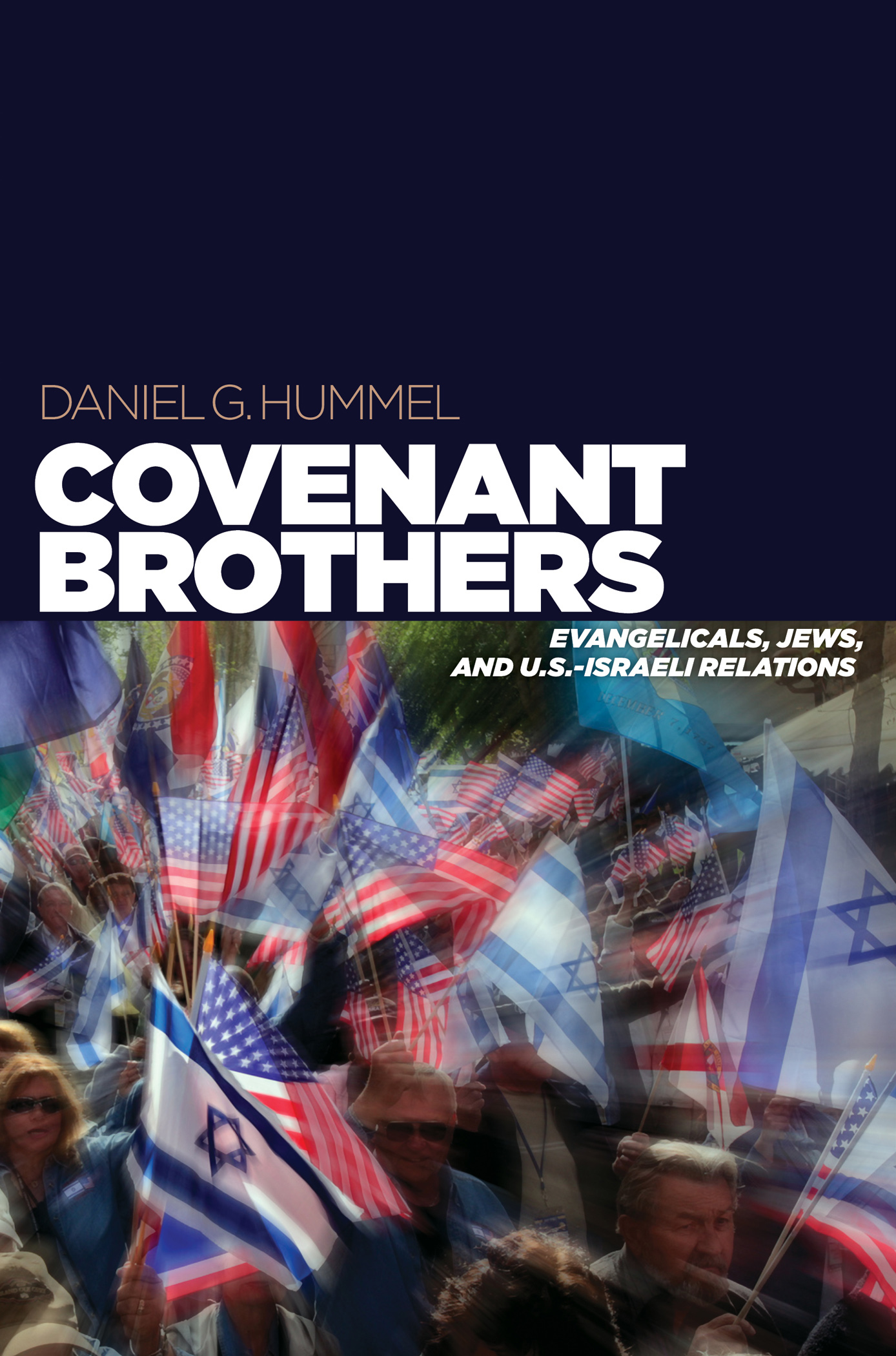 Jewish and Christian Zionists each lay claim to a special covenant with God. But the two groups have managed to put aside their historical and theological differences in support of, and sometimes in defense of, Israel. They have become, as Daniel Hummel’s title declares, “Covenant Brothers.”

Hummel’s new book, based on extensive research in American and Israeli archives, is a major contribution to our understanding of Christian Zionism and evangelical support for Israel. While primarily a book of religious history, Hummel’s work also makes important connections between cultural history and U.S. foreign relations.

Specifically, Hummel’s work dispels two persistent myths: First, present-day Christian Zionism is not dominated by right-wing Southern Baptists, American fundamentalists, and dispensationalists, but rather, has come to be defined by a transnational network of Pentecostals and Spirit-centered Zionists. Second, American evangelicals do not share monolithic views on Israel; instead, evangelicals are divided by their attitudes on proselytizing, prophecy, the prosperity doctrine, and political action.

Hummel’s analysis of the divisions within American evangelical support for Israel is, I argue, the central contribution of the book. Conflicts persisted among evangelical groups over the proper reasons for supporting Israel, and how that support should materialize. Some wanted to evangelize to Jews in an effort to convert them and bring them into the Christian fold. This, of course, created conflict with many Jews who wanted nothing to do with Christian proselytizing. (Billy Graham quickly discovered this.) Others minimized the role of missions and supported the State of Israel because they believed that the Jewish possession of the Holy Land to be a prerequisite for the fulfillment of prophecy. Others supported Israel for reasons of prosperity and blessings, based on a reading of Genesis 12:3, when God tells Abraham, “I will bless those who bless you, and whoever curses you I will curse; and all peoples on earth will be blessed through you” (5).

Yet while differences obtain among the groups, Hummel also notes that Christian Zionists of all types share one thing in common: they all steadfastly support the State of Israel. As Covenant Brothers demonstrates, though, this support did not appear all at once, nor did it coalesce without conflict. As Hummel states, “the evangelical political movement to support Israel is a product of advocacy, organizing, and cooperation beginning after the founding of the state of Israel in 1948 and advancing significantly in the wake of the 1967 Arab-Israeli War” (2). Given the history of Christian violence against Jews, and profound differences regarding the Truth of the Word of God, an alliance between evangelicals and Jews was not inevitable. Instead, it navigated several rocky periods before flourishing under the guidance of key individuals who institutionalized evangelical support for Israel.

Beyond the headlining work of Billy Graham, the efforts of G. Douglas Young, who founded the American Institute of Holy Land Studies in Jerusalem, is central to Hummel’s narrative. While influenced by fundamentalism and dispensational theology from a young age, Young came to adjust his views while living in Israel in order “to better accommodate the intimate social, religious, and political relationship between Israel and the church” (63). He did not see the need for missions since conversion was in the hands of God, not Christian proselytizers. That allowed Young to develop support for Israel in a way that fostered dialogue, rather than conflict, with Jews.

Hummel also details the efforts of the Israeli government to cultivate positive relations with Christian Zionists. He identifies a consequential shift which happened in the aftermath of the 1967 war as “Jewish attention” moved away “from mainstream Protestant institutions and toward conservative evangelicals who had thus far been absent from the organized Jewish-Christian dialogue” (85). Mainstream Protestants did not offer the type of unquestioning support of Israel sought by the Jewish Zionist leadership. In the longer term, the ramifications of this shift would prove to be massive. Immediately thereafter, cooperation between Israeli officials and American evangelicals led to a dramatic increase in Holy Land tourism. While Hummel understandably focuses on the theology and politics connected to this public diplomacy, Holy Land tours are also quite profitable for organizers on both sides of the Atlantic. Apocalyptic writings, such as the Left Behind series, and the work of televangelists have all proven to be good business, too. One question for further exploration concerns the influence of economic dimensions of the evangelical relationship with Israel.

The Jewish-evangelical relationship continued to be strained until the mid-1970s. Not until 1976, according to Hummel, did the relationship start to become a “full-fledged political alliance between evangelicals, American Jews, and Israel” (129). Antimissionary groups in Israel responded violently to Christian proselytizers, which soured relations, and the 1971 Jerusalem conference did little to bridge gaps. The evangelical concern for religious liberty threatened “a central Christian Zionist argument that Israel was in fact an open society for Christians” (133). Hummel credits the efforts of Arnold T. Olson, a prominent member of the American evangelical community, for stilling the troubled waters. Problems persisted, but following the 1973 War, the American Jewish Committee and Young took the lead in reconciling the differences between evangelicals and Jews. This led to a 1975 conference on Jewish-evangelical relations, and the two sides could agree on one thing: support for Israel.

One of the strengths of Covenant Brothers also concerns Hummel’s approach to the subject, considering not only the perspective of Jewish and evangelical voices, but also those of Palestinians. Yet his work would benefit from a more sustained investigation as to how racist and Orientalist ideas contributed to the sidelining of Palestinians from various conversations.

For today’s readers, it is perhaps most important that Hummel brings his study to the present day. The Christian Right, which accompanied the Reagan Revolution, became increasingly involved with the pro-Israel lobby. A Spirit-centered Zionism, driven especially by Pentecostals, replaced Jerry Falwell and the Moral Majority as the torchbearers of Christian Zionism. John Hagee and Christians United for Israel (CUFI) consolidated a fragmented Christian Zionism, and turned it into an enormous vehicle for lobbying on behalf of Israel. The grassroots organization claims to represent roughly five million Christians, a staggering number. (Vice President Mike Pence will address this year’s CUFI annual meeting.) Hagee solidified a Spirit-centered Christian Zionist movement. Now the movement spans the globe. According to Hummel, “The rising profile of Pentecostal and charismatic Christians in the United States, Europe, and the Global South has redefined the movement’s aims, reach, and influence. Now dominated by Spirit-centered Christians, it reflects nation-based prosperity teachings and the blessing theology of Genesis 12:3” (229).

Billy Graham plays an important role in Covenant Brothers, and there is one instance in which Hummel’s analysis does not mesh with the historical record. Hummel claims that “Billy Graham, according to rumors at the time and later recollections, had been decisive in lobbying President Nixon for aid” during the 1973 Arab-Israeli war (129). Later in the chapter, Hummel writes, “American evangelical responses to the war highlighted less visible Zionist advances since 1967. Perhaps most significant, Billy Graham lobbied President Nixon during the war on behalf of Israel, urging an American airlift of supplies. On October 28, according to [influential Jewish Zionist Rabbi Marc] Tanenbaum, Graham told Nixon over the phone that the ‘majority of Evangelicals were strongly supportive of Israel.’ Within twenty-four hours, Tanenbaum wrote years later in a treatment of the event, ‘U.S. planes are bound for Israel with shipments of missiles’” (142). Hummel cites an unpublished manuscript proposal written by Tannenbaum, which is a questionable-at-best source, especially since the war had ended by October 28.

This creates a misleading impression about Nixon’s decision to resupply Israel. By including a brief discussion of the U.S. airlift to Israel during the 1973 war, Hummel opens the proverbial can of worms about what actually happened. Much has been written by scholars and former U.S. officials.[1] For one thing, the airlift began on October 14, two weeks earlier than the October 28 phone call from Graham to Nixon. Second, Nixon’s reluctance to resupply Israel had much to do with his efforts to preserve détente with the Soviet Union, and also to remind Israel (not-too-subtly) of the need to engage in sincere peace discussions with its Arab neighbors following the war. He did not want Israel to rely on military force in order to hold onto the territories taken in 1967. Even Henry Kissinger, known for his pro-Israel orientation, supported Nixon’s hard line. But they changed their minds after Israel’s surprising losses early in the war. More important than Graham’s phone call was insistent lobbying by pro-Israel lobbies – especially AIPAC – and the repeated calls by legislators on the House and Senate floors for emergency aid for Israel. At the end of the day, Nixon would not let Israel be defeated, especially by Soviet arms. I very much doubt that Billy Graham’s “lobbying” had a “decisive” impact on Nixon’s decision to resupply Israel.

I applaud Hummel for diligently working to make connections between religious beliefs and U.S. foreign policy. Cultural factors certainly have an influence on U.S. policymakers, both in the domestic and foreign arenas. Just because cultural factors rarely have a decisive impact on foreign policymaking, that does not render them unimportant. They are part of a milieu of influences that impact presidential behavior. In this case, they were part of a larger mobilization of evangelical political action that could be seen in various places – the Moral Majority, Republican Party campaigning, and certainly the evolution of U.S.-Israel relations. Still today, as Hummel implies, Christian Zionist support for Israel provides a local, grassroots defense for Israel that makes it much harder for U.S. officials to oppose Israel’s occupation of Arab lands and awful treatment of Palestinians. That is very significant.

Hummel’s work is an extraordinary contribution to the literature about evangelicalism and Christian Zionism. The book offers a nuanced, thorough analysis of the development of post-WWII Christian Zionism and the importance of Israel for Christian Zionists. It is an essential read for anyone interested in the theological and intellectual underpinnings of Christian Zionist support for Israel; in fact, I think it is the best book to date.

Kenny Kolander is a Fulbright Postdoctoral Fellow in the School of Political Science at the University of Haifa. He earned his Ph.D. in U.S. Diplomatic History at West Virginia University in 2016. His current book manuscript, which is under contract with the University Press of Kentucky, is tentatively titled, Forging a New Relationship: Congress, Presidents, and Israel, 1967-1975.