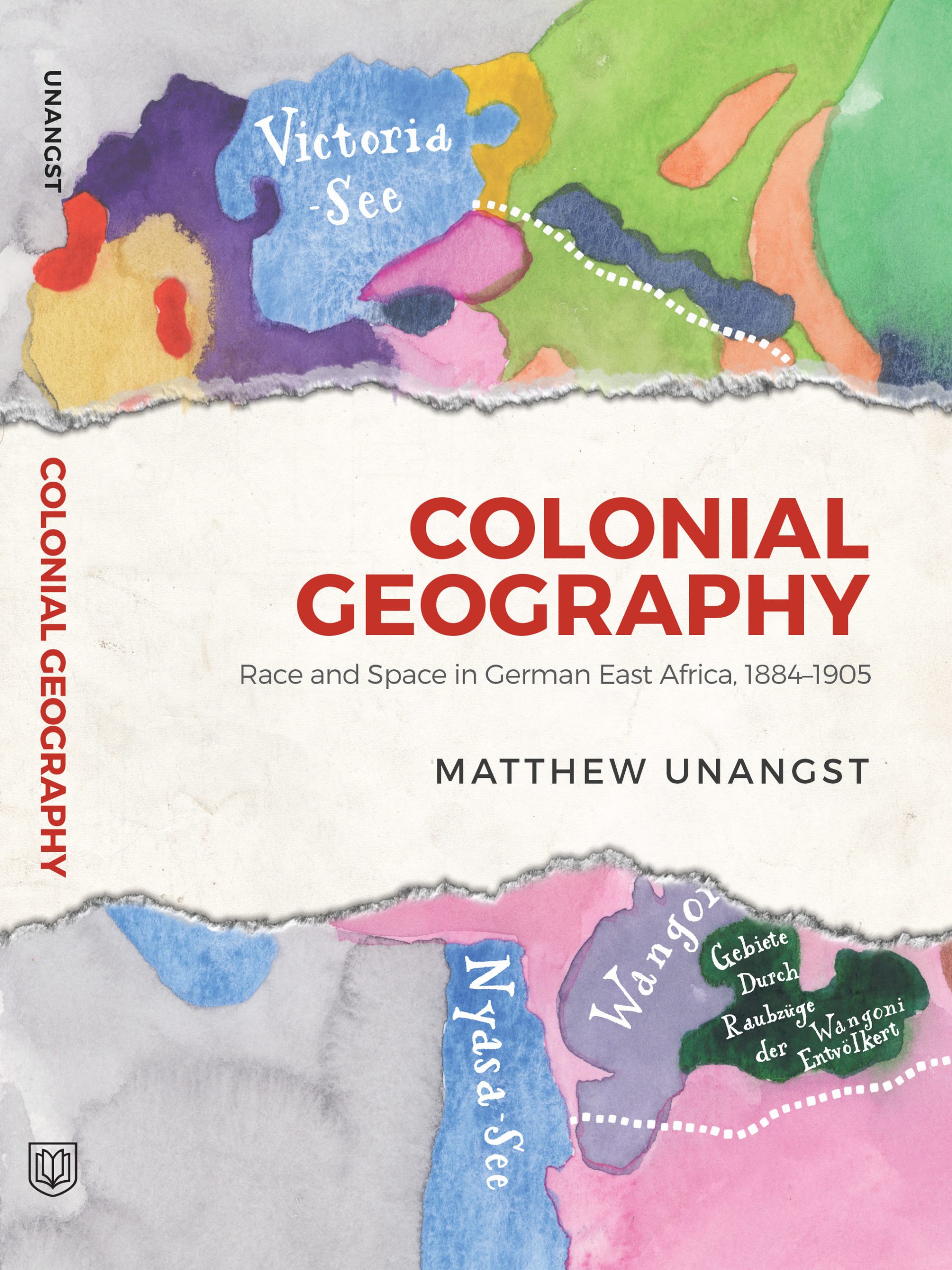 Colonial Geography: Race and Space in German East Africa, 1884-1905 charts how ideas about space competed with each other and changed over time in Germany’s conquest and occupation of East Africa.[1] Matthew Unangst’s new book examines specifically colonial shift from physical to cultural geographic perceptions of German holdings in East Africa to demonstrate the importance of the “mind maps” of East Africa. German officials used these “mind maps” to apply racial thinking to spatial representations of conquest and sovereignty. Drawing on an array of archives in Germany, the United Kingdom, and Tanzania, Unangst also demonstrates how non-European societies’ understandings of space played an important role in shaping German discourse on colonial boundaries. Through these two interventions, Colonial Geography—similarly to recent works by Mari K. Webel and Matthew P. Fitzpatrick—builds on the growing and rich scholarship of the ways in which the epistemic frameworks of colonized peoples molded and influenced colonizer behavior, governance, and perspectives.[2]

Since the late 1990s, a renewed interest in Germany’s colonial history, the third largest European colonial empire at the start of the First World War, has continued to grow.[3] Scholarship on the history of Germany’s colonial ideologies has flourished and inspired various subfields that examine the intersections of imperial power with genocide, gender, race, internationalism, concepts of disease, education, and also consider whether it is appropriate to discuss colonial continuity beyond the German empire’s disbandment in 1919. One especially productive facet of this growing field is the role of spatial thinking and critical geography in imperial decisions and its legacy. Historians have had to move beyond simply viewing the overseas empire as a precedent for later Lebensraum fantasies employed by the Nazi regime in Eastern Europe. That teleological view has often ignored how space and geography were constantly reformed and reimagined during the imperial era itself. The German imperial imaginary was never static or fixed, as has been demonstrated time and again by scholars like Michelle Moyd, Suzanne Marchand, Lora Wildenthal, Bradley Naranch, Angela Zimmerman, Sebastian Conrad, and many more.[4]

By carefully detailing how space and empire and territorial and cultural politics were in flux in nineteenth-century East Africa and Central Europe, Colonial Geography very much inserts itself into these debates and contributes to the wider literature on critical geography and spatial history.[5] Unangst productively contrasts his work with that of anthropologist Mahmood Mamdani: whereas Mamdani insisted that clear territorial borders only became important at the outset of colonial rule, Unangst contends that the transition to associating territory with political power began earlier in East Africa, before formal colonialism in the region, when local societies encountered global trade networks and new economic ideologies in the 1830s.[6] Throughout the book, Unangst argues for the importance of charting the history of African societies’ own territorial conceptions of power and development prior to European conquest; ignoring this precolonial geography of power reinforces the idea of a “less developed” Africa—the claim Europeans made in their civilizing mission, developmentalist territorial imaginings to justify the wholesale seizure and occupation of the continent. Unangst demonstrates further how German conceptions of space were in turn influenced by the political and cultural geography of Arab and African societies in East Africa. For Unangst, the German colonial period resulted in more continuities than disruptions of spatial understanding for Africans in the region. In fact, the disruptive experience was more pronounced on Germans’ own understandings of themselves, especially around their concept of Heimat and what constituted imperial power as each iteration of their spatial development conceptualizations met resistance and had to be adapted to local norms in order to save face and make any progress in their schemes for a Europeanized development of the region.

The first half of the book (Chapters 2-6) highlights this intellectual history of territoriality and its course. Chapter 2 illustrates how Germans adopted the view of precolonial coastal groups towards those in the Hinterland. For instance, established ethnic distinctions in Africa played out in representations like Pesa Mbili’s and Sabatele’s Nyamwezi maps of caravan routes to the interior and influenced German attitudes about which non-coastal groups were and were not suitable to agricultural development and labor. These representations also determined how German power had to adapt to Hehe outposts and territorial claims along routes inland. Chapter 3 examines the development of the colonial model by studying how Carl Peters and the Society for German Colonization made excursions to broker treaties with local leaders in 1884 and 1885. German negotiators approached these treaties with a Whiggish historical progression in mind. Accordingly, African political territorial claims were “medieval” in their development, which justified German acquisition as the political rule that could yield economic improvement. In doing so, Peters sought to make East African rulers heads of “vassal states” to the German Empire, in a failed attempt to map the Holy Roman Empire onto East Africa.

Chapters 4 and 5 show the flaws in this tessellation of medieval Europe onto Eastern Africa as the German model evolved beyond Peters and next argued that East Africa was underdeveloped due to the Indian Ocean “Arab” Slave Trade networks. Some colonialists, particularly missionaries, began to insist that African societies had to be “rebuilt”—borrowing from local models—before they could be remade into the agricultural landscapes and labor pools Germany needed. Over the course of these debates in the early years of German colonialism, Unangst demonstrates how German territorial understandings shifted to cultural geography understandings of race and space as Peters lost influence and the tales of Emin Pasha and Bismarck’s execution of the Bushiri War (Chapter 6) created a cultural claim to sovereignty as Germany asserted its narrative of a “humanitarian duty to Protect Black Africans from the Arab Slave trade.”

Chapters 7, 8, and 9 consider the development of formal German colonial policy in the 1890s after Hermann von Wissmann’s (1853-1905) conquest of the region for the German state. These chapters dive into the ways in which Kultur played an increasingly prominent role in German understandings of space in East Africa and how the anti-Arab narrative—embodied by the myth of German humanitarianism against the Indian Ocean Slave Trade—gave way to a revised view of Arab and coastal groups of Africans as “models” for interior Africans, with the assumption that the interior should somehow meet German colonial developmentalist goals. Chapter 7 highlights the early trial-and-error approach of the colonial administration as it attempted to use the “semi-civilized coast” as a means to tame the “wilderness” of the interior. The first efforts to do so using technological innovations of the railroad and the telegraph failed, and so the focus shifted to forcing the social evolution of East Africans to meet German agricultural and mining output goals. Chapter 8 demonstrates how, even as these cultural geography narratives of incremental progression of social evolution by region in East Africa gained currency in the administration, African communities did not neatly fall into the categories imposed and were able to adapt and co-opt German structures and policies at a local level to their own ends. One example of non-Europeans making use of colonial structures is the role played by coastal elites like Sewa Haji and Amur bin Nasur, who positioned themselves as intermediaries—with all the benefits that entailed—between the German administration and the East African population under the Soden System, which had adopted Swahili as a key language in German colonial administration, as Arabs increasingly came to be seen as allies in “civilizing” the region alongside Germans.[7]

The final chapter addresses the emergence of Friedrich Ratzel’s geographic theories. Friedrich Ratzel’s concept of “biogeography” applied biological theories of evolution to geographic theories of cultural diffusion to explain the progress of civilization. Ratzel’s viewed Kultur and colonialism as aspects of natural selection, and this assumption played a role in and were simultaneously influenced by the intellectual linkage of Kultur to agricultural soil development. These linkages were exhibited in various migration schemes by the administration to cultivate East African soil, such as the importation of Sinhalese farmers from Sri Lanka.[8] The Maji-Maji War brought a partial end to these more localized approaches as the metropole strove to centralize more of its authority in East Africa to address progressive crises. Throughout the imperial era, however, regardless of which facet of German colonialists dominated the narrative, the end result was a German imaginary in which “time became space” as they attempted to “make a new progression of history on the landscapes of East Africa and the bodies of East Africans” through complex schemes to create an idealized agrarian region.[9] Unangst does not portray the emergence of biogeography as a simplistic argument for a Sonderweg into the Nazi Lebensraum policies, but instead shows the careful evolution of the agrarian ideals in the colonial sphere between 1884 and 1905 that partially influenced later policy in Eastern Europe, leaving the door open to scholars of the interwar period to map out how the intellectual history of race and space progressed from 1905 to 1933.

Chapters 2, 4, and 6 in particular are three of the strongest, must-read chapters in the entire book. In the classroom, Chapter 6 in Colonial Geography and Chapter 7 in Matthew Fitzpatrick’s The Kaiser and the Colonies are perfect companions to read alongside each other to piece out the complexities of territoriality, sovereignty, cultural geography, and monarchy in the region during the Abushiri Revolt/Bushiri War of 1888-1889. Unangst’s handling of the 1888 challenge of indigenous East African coastal elites to private German colonialism and the racist clash of civilizations narrative against Islam that Chancellor Bismarck crafted to make the German response palatable as a pan-European project with support from the rival British interests in the region is a superbly written exploration of the intricate relationship between race, space, diplomacy, capitalism, and empire.

In a well-researched, theory-dense text, Unangst has added many layers to the scholarly debate on and understanding of the first few decades of East African societies’ encounter with German colonialism in the long nineteenth century. Colonial Geography initiates a series of questions and prompts about race, space, and empire that future scholars will likely expand upon. It is hoped that other works will continue the conversation by exploring the spatial history perceptions of East Africa and the role of East Africans themselves into the League of Nations Mandate period and that still others will follow a similar model in considering other regions, such as Southwest Africa, Cameroon, and Togo to round out the intricacies of African communities’ encounters with and the legacies of German biogeographic colonialism in Africa. 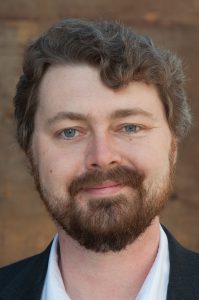 Sean Andrew Wempe is Associate Professor of Modern European History, California State University—Bakersfield.  Wempe completed his Doctorate in History at Emory University in 2015. He is the author of Revenants of the German Empire. Colonial Germans, the League of Nations, & Imperialism (New York: Oxford University Press 2019) and Chronic Disparities: Public Health in Historical Perspective (New York: Oxford University Press, 2020). His current research projects include investigating German and British interference in League of Nations international narcotics regulations in the 1920s and 1930s, an article on the 1997 Dahlem Conference concerning the standards for and feasibility of the eradication of infectious diseases, and a number of articles on League of Nations’ efforts to combat Rinderpest, Malaria, and Sleeping sickness in the Mandates in Africa in the 1920s and 1930s.