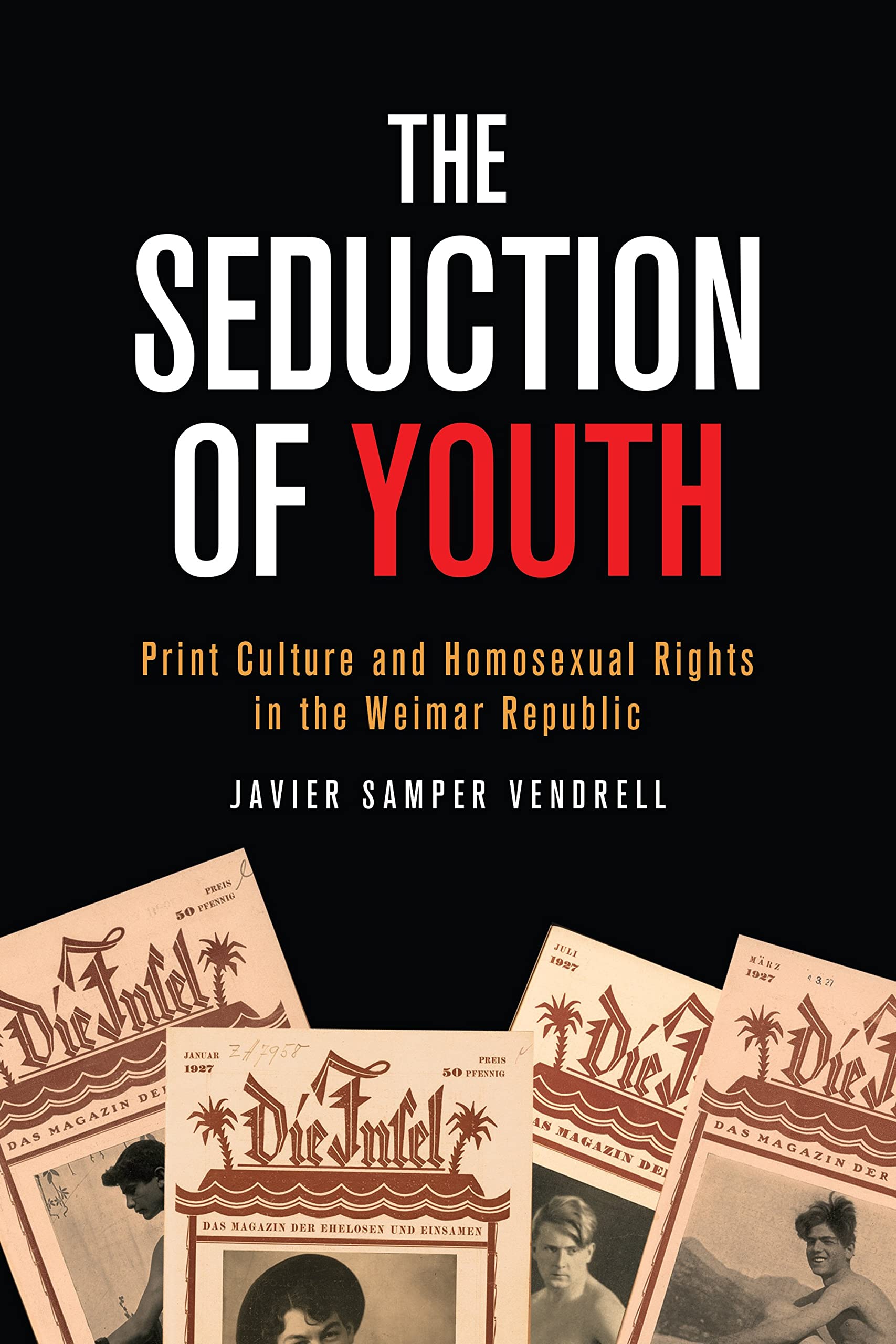 In popular and academic discourses, Weimar Berlin is often heralded as the period that ushered in the beginnings of queer emancipation and liberation in Europe.[1] One can immediately think of the work of Magnus Hirschfeld (1868-1935) and his Scientific Humanitarian Committee (Wissenschaftlich-humanitäres Komitee and Institut für Sexualwissenschaft), advocating for the liberation of homosexual men and women through reason and rational thought. However, to argue that Magnus Hirschfeld and his organization monopolized the discourse for Weimar gay liberation in Germany would be far from the full history. Javier Samper Vendrell’s The Seduction of Youth: Print Culture and Homosexual Rights in the Weimar Republic offers fruitful insight into the early twentieth-century gay liberation movement through an analysis of print media, explicitly focusing on the publication work of Friedrich Radszuweit (1876-1932) and his Federation of Human Rights (Bund für Menschenrecht, BfM), the largest homosexual emancipation organization in Germany at the time.

Through Radszuweit and the BfM, Vendrell hopes to extricate the “linkage between the homosexual movement, the power of print culture as a tool for social change, and the widespread belief during the Weimar Republic that homosexuals were able to seduce youth” (4). For Vendrell, Radszuweit and the BfM advocated for gay liberation through the lens of respectability politics (7). However, Vendrell’s in-depth analysis exposes how Radszuweit and his many publications framed homosexual men as respectable citizens of the Weimar Republic while at the same time deploying erotic images of male youths to help increase sales of his magazines to reach a wider audience. By focusing on the extensive work of Friedrich Radszuweit, Vendrell sheds new light on the complex political dimensions of the homosexual rights print culture that was “a fertile ground for homosexual and homophobic politics” (8). Vendrell’s work also articulates a more complex and contradictory tension between the homosexual rights movement, same-sex desire, and the accusation of youth seduction within the larger swath of German society.

Chapter 1 sets the scene for the contemporaneous discussions of Weimar Germany’s focus on youth seduction and homosexuality. Through an extensive analysis of the writings of an array of late nineteenth- and early twentieth-century politicians, psychoanalysts, and moralists, Vendrell articulates the social and political anxiety of Weimar Germany concerning adolescent and homosexual behavior. In twentieth-century Germany, adolescence became a key battleground for prevention against homosexuality.

In Chapter 2, Vendrell explores the homosexual print culture environment and situates the BfM and Radszuweit within this nexus. Radszuweit held alternative political beliefs to Hirschfeld and many other prominent homosexual rights activists of the early twentieth century. While both used print media to spread their message for gay emancipation, Hirschfeld promoted emancipation based on scientific thought and education (38). Radszuweit, on the other hand, developed his publishing house into a business to reach a broader audience (39). For Radszuweit, only by gaining an expansive audience could the BfM change minds about homosexuality. This approach, however, did not lead to revolutionary politics. In the many articles the BfM published, Radszuweit maintained that homosexuals should assimilate heteronormative standards of their culture and society and avoid what he would consider the debauchery of Weimar Germany’s gay nightlife and culture (60).

But the crux of Vendrell’s argument is found in Chapter 5, “The Pitfalls of Boy Love,” where Radszuweit and the BfM’s politics and publications clash. Vendrell maps out the political discourse concerning the “equality model”[2] and places Radszuweit and the BfM’s beliefs into this constellation and development. In Vendrell’s assessment, Radszuweit understood the power of German society writ large and popular stereotypes of homosexuals and homosexuality (123). The BfM’s readership learned about the crime of Boy Love (Knabenliebe) from the homosexual press and the BfM’s positions against it. However, hypocritically, Radszuweit’s publications still allowed the printing of erotic images of male youths to flood the pages of his magazines, allowing the economic to overcome Radszuweit’s respectability politics (114).

Vendrell highlights two other social issues at the time in his work: male prostitution and age of consent. Similar to the issue of boy love, Radszuweit’s respectability politics ran counter to his own publication’s work in the realm of prostitution and age of consent. Vendrell, in Chapter 6, charts out the BfM’s campaign against male prostitution and in support of a higher legal age of consent for same-sex acts, and the hopes of decriminalization of homosexuality. Many contemporaneous political stances favored the decriminalization of Paragraph 175 for legal and medical reasons (149).[3] The Criminal Law Committee favored the decriminalization of the statute and approved it, but due to political polarity and economic crisis the law would not be amended (151). Vendrell underscores how Radszuweit’s and the BfM’s alliances with conservative politicians and homophobic policies inescapably undermined the homosexual rights movement as a whole. The cost of decriminalizing Paragraph 175 meant that Radszuweit’s approach was based on “compromise, appeasement, and assimilation” (153). If that included aligning with homophobic conservative politics, Radszuweit would gladly do so.

Vendrell’s The Seduction of Youth makes an outstanding and critical contribution to the growing academic literature surrounding homosexual rights movements in Weimar Germany. His work illustrates how complex and non-linear the struggle for homosexual rights was in early twentieth-century Germany. In addition, Vendrell provides a more comprehensive historical and cultural analysis of queer politics in the Weimar Republic through his detailed analysis of various archival materials such as journals, newspapers, magazines, novels, and, most importantly, photographs. By applying historical, literary, and cultural methodologies to these relevant historical products, Vendrell unearths a matrix of alternative homosexual politics in gay Weimar Germany. Radszuweit’s death in 1932 did not change the BfM’s political trajectory and they continued promoting its assimilationist politics within their publications. Radszuweit’s and the BfM’s alternative politics ultimately failed at its goals in the long term with the rise of the National Socialist German Workers’ Party (NSDAP) in 1933. After a government decree was announced in February of the same year, all homosexual locales were immediately shut down, publishing houses closed, and material destroyed, thus ending the gay emancipation movement in Germany (160).

Vendrell’s The Seduction of Youth presents an accessible and informative exploration of the complexities and tensions of the gay rights movement in Germany in the early twentieth century. Vendrell has widened German and queer studies scholarship and offered scholars new means of exploring the ever-present tensions of same-sex desire and youth seduction in other areas of historiography.

[1] See Laurie Marhoefer’s Sex and the Weimar Republic: German Homosexual Emancipation and the Rise of the Nazis (Toronto: University of Toronto Press, 2015); Robert Beachy’s Gay Berlin: Birthplace of Modern Identity (New York: Knopf, 2014); James Steakley’s The Homosexual Emancipation Movement in Germany (New York: Arno Press, 1975).
[2] The equality model is defined as unpaid sex between two consenting masculine-acting men (112).
[3] Paragraph 175 was a section of the German criminal code that outlawed same-sex acts between men and bestiality. It was established in 1871 after the reunification of the German Empire and it became more widely and forcefully applied. The law would be expanded during the Nazi Regime and led to an infamous persecution of queer people in history. The statute remained in place after WWII in both East and West Germany and was not struck from the criminal code until 1994. See Samuel Clowes Huneke’s States of Liberation: Gay Men between Dictatorship and Democracy in Cold War Germany. (Toronto: University of Toronto Press 2022). 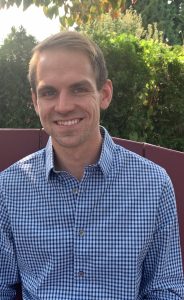 Braden Russell is a PhD student in Germanic Studies in the Department of Central, Eastern, and Northern European Studies at the University of British Columbia. His research interests lay in German-Jewish cultural history and queer German studies. He has presented on topics at academic conferences on Holocaust memory, queer memorialization, and queer memory. His prospective dissertation topic will look at intersections and negotiations of identity and belonging in queer Jewish-German cultural products.