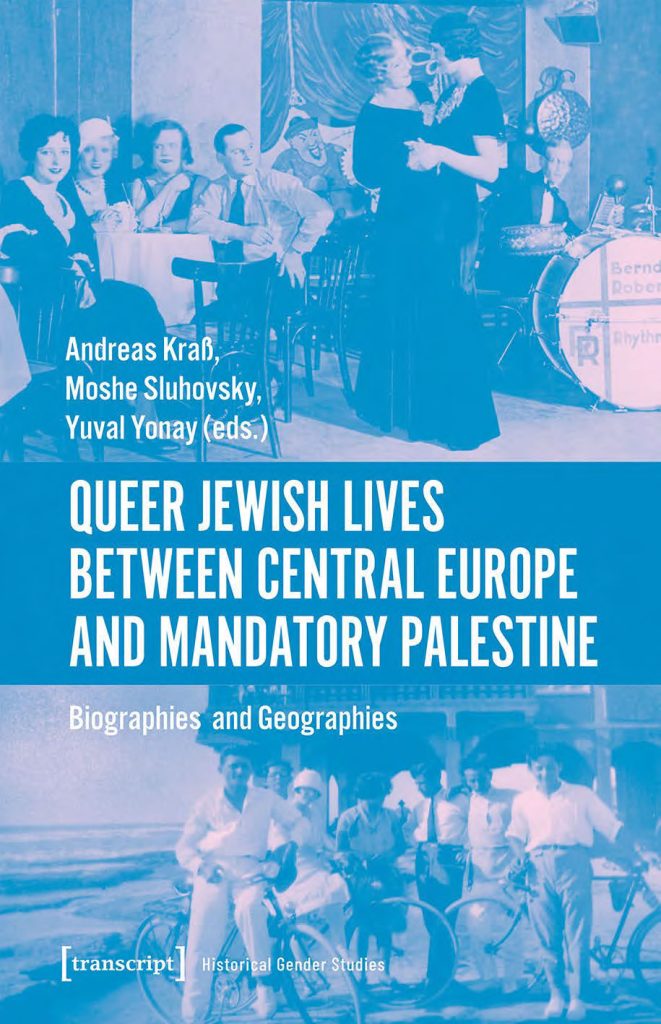 This astonishing, groundbreaking anthology offers a panoply of unexpected and profound insights into the intricate intersections of queer and Jewish lives in both 1920s-1930s Central Europe (extending from Berlin and Vienna to Budapest, Prague, and Warsaw) and Mandatory Palestine and the nascent state of Israel in the 1930s-1940s and beyond. In a dozen carefully crafted essays exemplifying a variety of scholarly genres and each using a completely unique source base, the whole definitively contains more than the sum of its parts. Several broad lines of inquiry recur and, cumulatively, four strong core arguments emerge.

First: Berlin in the 1920s and early 1930s – the third largest city in the world at that time – was, indeed, a paradisical queer dreamscape, yet it is important to grasp that access to its benefits and joys remained quite uneven. The marvelous nightlife options, the broad mainstream publicity around the topics of same-sex relations and diversity of gender expressions, and the campaign to decriminalize male homosexuality led by the indefatigable Magnus Hirschfeld made it a magnet for many, as well as a place in which self-acceptance for those who diverged from heteronormative paths was greatly eased. However, it bears emphasis that much medical professional pontificating on homosexuality published in Central Europe in those years persisted in authoritative pathologizing. Antisemitism was rife, hampering solidarity across the Jewish-gentile divide. Meanwhile, the Jewish community’s attitudes towards its same-sex desiring members was variable and by no means unfailingly liberal. And even though, unlike male homosexuality, lesbian conduct was at least in Germany not itself illegal, it remained scandalous – and, in case of exposure, could ruin careers.

Second: Sexual politics in Mandatory Palestine, before the arrival of tens of thousands of legal and illegal Central European immigrants in the 1930s-1940s, can best be characterized as marked by an unthematized coexistence of presumptive heteronormativity with quietly tolerated same-sex conduct between males (in adolescence or, later, casual-anonymous and/or for pay), but with no concepts whatsoever either of gay sociabilities or of self-definitions as same-sex-desiring individuals. Within the pre-state Yishuv, it is suggested, mores were akin to those prevailing in the surrounding Arab population as well as those typical among Jews in neighboring Arab nations. It was above all the gay men among the Jeckes – specifically the German immigrants – who carried into Palestine ideas of homosexual subjecthood and lifestyle practices such as group sociability, same-sex business networking, and long-term same-sex unions. In short: a gay culture. Coeditor Yuval Yonay makes perhaps the most forceful case, citing a source contending that same-sex sex was so common between unmarried men – Jews and Arabs alike – in Ottoman Empire Palestine that religious authorities suspected it could occur any time two single men were left unsupervised. The entry of German gay immigrants, he argues (and documents with particularly poignant testimony from two elderly informants of quite divergent backgrounds, selected from an impressively large oral historical source base of 40 interviews with gay men and 6 with lesbians), radically changed how people thought about themselves, in their most intimate being, and how they were thought about by others.

Third: The ensuing learning processes – for the queer Jewish individuals themselves, whether of immigrant origin or native-born sabras, and for the incipiently developing Israeli surround (in coeditor Moshe Sluhovsky’s words, “a puritan society” (9)) – were jagged and bumpy at best, with very few exceptions, and there was a time lag of multiple decades before non-morbid understandings of same-sex desire could enter the national lexicon. Same-sex-desiring individuals came to see themselves as having a distinctive orientation, but all too often this self-recognition was, at least initially, tainted by the stigmatizing verdicts of experts.

Nonetheless, fourth: An important compromise formation evolved, helpfully dubbed by contributor Dotan Brom “the transparent closet.” (291) Queer Jews did manage to work out their own lives and loves, as well as sustainingly supportive friendship circles and suitable employments. In what must be the most oft-alluded-to attitudinal stance mentioned throughout the volume, we are told by informants who lived through the postwar years, with regard to same-sex-desiring Jewish individuals and same-sex couples in Palestine/Israel alike: “‘Everybody knew it, but no one talked about it’”; “‘no one talked about it’”; “ ‘it was not talked about.’” (18, 19) These were lives and loves that were “‘known to all, but never stated publicly.’” (230)

This volume, then, is all about “the migration of knowledge.” (291) It is, however, in addition, very much about the recuperation of entire ways of being long lost to collective memory. (A fine example is the early twentieth-century phenomenon of Jewish traveling vaudeville artists’ gender-bending. Contributor Susanne Korbel draws on historian Mary Gluck’s brilliant apercus about Jews’ simultaneous “invisibility” and pervasiveness within new forms of Central European popular culture, as Jewish performers in particular developed yet further a centuries-old tradition in which men and women parodied the gender behavior of the other sex into a fuller exploration of gender’s elasticity and complexity.) No less significant are the innovative perspectives on individuals we thought we knew well. A key example is coeditor Andreas Kraß’ moving reconstruction of sexologist Hirschfeld’s travels through Mandatory Palestine in 1932. The essay gives us unanticipated fresh vantage on Hirschfeld’s humanistic thought, including his visionary call for Arab-Jewish empathic kinship and his utopian hopes for a globe-spanning “United States of the World.” (206-207) Above all, this is a book about the painstaking toil of precious detail recovery, or – as contributor Yael Rozin puts it, in her study of the artist Annie Neumann, partner of sculptor of the Labor and Defense Memorial Batia Lichansky – the work of “cull[ing] memory crumbs.” (225)

Indeed, one of the volume’s greatest gifts is its abundance of biographical snapshots and its productive juxtaposition of the already-famous with the previously unknown and unsung. Among the Central Europeans, we thus find a German Jewish philosopher-novelist convert to Islam, a Polish ex-criminal folk hero and Orthodox spiritual leader, but also a Russian-heritage Frankfurt am Main shop assistant killed in the gas at the T4 center at Bernburg (labeled a “stateless Jew” and “licentious lesbian”) as part of the 14f13 phase of “euthanasia” murders. (59) Among the Israelis, we find a prestigious hotelier, a Knesset politician, a publisher, a professor, a journalist, a prominent male dance critic, and two celebrated female dancers, but also gay waiters, the lesbian owners of an upholstery store, and a lesbian couple running a popular luncheonette. Throughout, the tone is nonsentimentalizing, yet also tender.

We are introduced as well to a 250+-name database of individuals who were both Jewish and queer and living in Berlin between 1897 and 1945, constructed by Andreas Pretzel and Luisa C. Böck and analyzed by Pretzel and Kraß – a database which allows a reconstruction of favorite clubs frequented, webs of friendships, and types of involvement in community groups and social movements. Here is discussed the poet Annette Eick (who appeared previously in the magnificent film Paragraph 175 – which bears re-watching in 2022) and her interventions in debates about bisexuality and about the “masculinization” of women. Here too there is mention of the illustrious refugee scholar George L. Mosse, and reflection on whether he would ever have written his pioneering books on Jewishness, sexuality, nationalism, and racism if he had not been forced to flee first to the United Kingdom and then to the United States. And here is his lesbian cousin Martha Mosse, who had been “the first female superintendent for the Police Headquarters of Berlin in 1928,” before losing her job when the Nazis came to power and turning to work for the Jewish community, then subsequently being deported to Theresienstadt, and later becoming a witness at the Nuremberg Trials. (42-43)

“Germany will never recover from the loss of its pre-war queer Jewish figures.” This is the assessment of Pretzel and Kraß. (65) And with regard to the experiences of gay and lesbian Israelis in the 1950s-1970s, Yonay notes how “limited in scope” the available remaining evidence is, and yet also declares, rightly: “The little we do have is priceless.” (137) Sluhovsky wonders at the outset about the frequency of intersectionality of Jewishness and queerness, the apparent prevalence of Jews among queers, and of queers among Jews. (8) Yet while this question of double marginality is raised repeatedly, it remains unresolved. Queer Jewish Lives contains immense empirical spade-work, and the bibliographies attached to each essay are rich compendiums of useful leads for further inquiry. There is far more to be done; this volume shows the way. 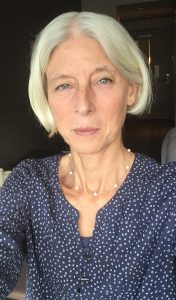 Dagmar Herzog is Distinguished Professor of History at the CUNY Graduate Center, where she teaches on the histories of gender and sexuality, Nazism and the Holocaust, and historical methodology and theory. Publications include: Sex after Fascism: Memory and Morality in Twentieth-Century Germany (Princeton, 2005); Sexuality in Europe: A Twentieth-Century History (Cambridge, 2011); Cold War Freud: Psychoanalysis in an Age of Catastrophes (Cambridge, 2017); Unlearning Eugenics: Sexuality, Reproduction and Disability in Post-Nazi Europe (Wisconsin, 2018); and (coedited with Chelsea Schields) The Routledge Companion to Sexuality and Colonialism (Routledge, 2021). She recently edited a special issue of Psychoanalysis and History on “Queering Freud Differently” (Edinburgh, 2020). Her current project, Eugenic Phantasms, considers how a focus on the theology and politics of disability in twentieth-century Germany changes how we think about racism and fascism alike.