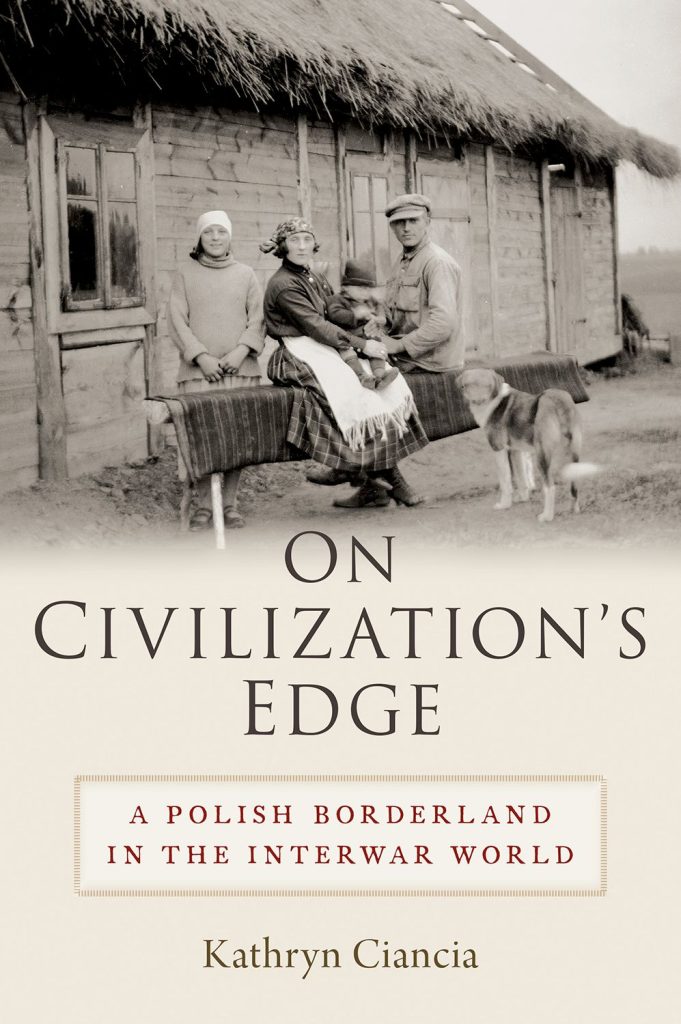 As a country made up of “three unequal halves,” to quote Stefan Żeromski’s famous statement from his novel The Spring to Come (Pol. Przedwiośnie), interwar Poland was a place where regional differences were the foundation of its statehood, rather than a curious fact worthy of attention in tourist guides. With different currencies, divergent railroad networks, and distinct imperial legacies, the Second Polish Republic (1918–1939) had diversity inscribed into its very identity, forcing its political and bureaucratic elites to become diversity managers of their time. Diverse was also the country’s population, especially the one-third that wasn’t Roman Catholic and did not speak Polish as their first language. Volhynia (Ukr. Волинь, Pol. Wołyń, Yidd. װאָהלין), the setting of Kathryn Ciancia’s On Civilization’s Edge: A Polish Borderland in the Interwar World (Oxford University Press, 2020), is a case in point here. Nestled between present-day Belarus, Poland, and Ukraine, Volhynia was one of the linguistically, nationally, and religiously diverse regions in interwar Poland.

As a former western outpost of the Russian Empire and a new eastern frontier of the Second Polish Republic, Volhynia became a place of intense civilizational efforts, which is also the grand theme behind Kathryn Ciancia’s meticulously researched, immensely detailed, and vividly written book. The author traces the history of modernizing and civilizational efforts in the region to paint a larger picture of how Volhynia became a subject of state- and nation-building activities that sought to incorporate its people into the newly established Polish Republic. As a result, On Civilization’s Edge becomes a story of an encounter – both material and imagined – between the “civilized” and the “civilizee” in Europe’s notoriously liminal zone between Berlin and Moscow.

Despite its obvious anthropological connotations, Ciancia’s account is much more political in its significance, although incredibly ethnographic in its form. Along these lines, the author seeks to examine “how people in the past constructed difference in order to frame their actions within the world” (p. 17). Thus, the very notion of “civilization” becomes not an evaluative, zero-sum measurement, but an analytical tool, a politically mobilized label to scrutinize people’s actions and events. In this manner, On Civilization’s Edge engages with themes of borders, difference, and multiculturalism that continue to fuel academic research and public discourse. Volhynia’s position on the edge—of the Second Polish Republic and (formerly) of the Russian Empire—caused those states to intensify assimilationist efforts to pull the region closer to the metropole, like in many other European borderlands. Ciancia’s book engages with one such set of efforts and policies in the interwar period.

And like today, with various languages, nationalities, and religions present on its territory, Volhynia became a source of substantial anxiety for the Polish state and its officials, inducing fears of both denationalization (of ethnic Poles) and ennationalization (into non-Polish groups). As Ciancia observes, “Polish civilizing missions in Volhynia relied on both a certain sense of national confidence—that Poles as a unified group had the right to rule the non-Polish population—and an ongoing perception of national fragility” (pp. 238–239). Intermarriage, for instance, was one such source of anxiety. A 1922 report promoted essentialist thinking about identity by claiming that, once converted to Orthodoxy, ethnic Polish men would be “considered lost for Polishness” (p. 63). Equating being Polish with being Roman Catholic and Ukrainian with being Orthodox represents one way, aside from language, in which nationalist activists saw the world around them and engaged in reductionist thinking. Similarly, forced conversions to Catholicism in the late 1930s went hand in hand with claims denying the existence of the Ukrainian nation. At that time, national activists in soldier’s uniforms sought to “awaken Polishness” among locals in what was essentially a postcolonial discourse about Volhynia as a former part of the Polish–Lithuanian Commonwealth. Commenting on the military involvement in forced conversions in 1938, a colonel explained that they took place “to right the painful harm done to both Poland and Polish families, the harm inflicted by the Russian partition” (p. 219).

Fears around de/ennationalization were further exacerbated by the region’s demographic makeup. In 1931, Polish speakers represented 17 percent of Volhynia’s population and were outnumbered 4:1 by Ukrainian speakers (68 percent). In addition, the region was also home to Jews (10 percent), Czechs, Germans, Karaites, and Russians, alongside other groups, including more-than-occasional pockets of locals describing their nationality and language in terms of “from here” or “of here” (Pol. tutejszy). With scarce infrastructure and a landscape characterized by a mix of marshlands, forests, and hills, state officials faced a true logistic challenge – both literally and figuratively – in their attempts to modernize the region. As has often been the case, the professional “civilizational” force consisted mainly of teachers, healthcare workers, and military settlers, akin to Pieter Judson’s idea of “guardians of the nation,” but tasked with promoting the idea of “civilization.” Here, the idea of civilization (Pol. cywilizacja) corresponded to “ever-higher levels of material development and technical progress” (p. 1), as reflected in the writing of an anonymous journalist whose journey to Volhynia in 1936 left him wondering how the locals lived “on the level of people from remote eras, for centuries retarded [sic.] in spiritual, intellectual, and economic development” (ibid.).

With the influx of ethnic Poles sent on such “civilizing missions” to Volhynia, nationality grew into an evergreen issue at the local and government level. Soon, questions followed. Was the region’s East Slavic majority to be known and named as Ruthenians or Ukrainians? Is there a Ukrainian nation? Can locals’ hearts be won over by future nations? And what of intermarriage and its consequences? In a colonial-like manner, these questions busied the minds of officials, testing the limits of state power in discourse and beyond.

Much like in Pierre Bourdieu’s pronunciation about the power of categorization, such and similar problems were de facto political, not cultural or “civilizational.” “The act of categorization…,” writes Bourdieu, “exercises by itself a certain power,” which is why “‘ethnic’ or ‘regional’ categories, like categories of kinship, institute a reality by using the power of revelation and construction exercised by objectification in discourse” (p. 223). Thus, if categorization constructs objects of inquiry, it also has the power to unmake them. In this vein, assimilationist state policies in interwar Poland sought to make and unmake – or, as Ciancia writes, to fix and unfix – certain categories as long as they fit their agenda. As such initiatives intensified after the death of Józef Piłsudski (1935), the word “Ukrainian” was actively avoided in official discourse. While nominally multiethnic and multicultural, the Polish state has with time started exhibiting traces of what Agnieszka Pasieka calls “hierarchical pluralism,” a configuration in which nominal diversity is co-present with a vertical acknowledgment of which group holds the power to dominate and define norms.

On Civilization’s Edge opens with a wonderful vignette with an anecdote featuring the author’s grandfather who preferred the former Austrian lands across the Vistula River (Pol. Wisła) over those that used to belong to the Russian section of partitioned Poland–Lithuania. “Because it had been under Austrian rather than Russian rule,” he explained, “the level of civilization in Szczucin remained higher” (p. ix). Such and similar statements make part of a larger collection of imaginary geographies that, despite the passage of time, seem to pervade popular thinking to this day in various parts of East-Central Europe, with residents of countries such as Czechia, Hungary, Poland, or Slovakia persistently favoring Central over Eastern Europe as their place in the collective geographies. This is why (big-city, mostly western) “Poland A” and (mostly rural and eastern) “Poland B” are still objects of discussion, why local sports events between rival teams from Tarnów and Rzeszów (both east of Cracow/Kraków) transform into clashes between the unmarked “locals” (Tarnów) and the marked “Ukrainians” (Rzeszów), or why residents of Novi Sad in Serbia may have no interest in traveling to Belgrade due to its “Oriental” (Serb. istočnjački) character, as anecdotal evidence suggests. Russia’s invasion of Ukraine and the Polish-Belarusian border crisis are just two examples of how historically cemented thinking about borders, “civilization,” and identity makes front-page news today. Examples such as these reveal how problems raised in On Civilization’s Edge have endured far beyond the Second Polish Republic, making Ciancia’s work even more timely and worth reading. 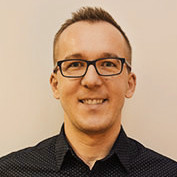 Krzysztof Borowski is a Lecturer in Polish Studies at UW-Madison where he teaches Polish language and culture courses. His research interests include political discourse in Poland, nationalism, and issues of language and identity.