From 7-8 April 2022, the UW-Madison Department of History Board of Visitors convened at Memorial Union. Established in 2015, the Board is comprised of History alumni/ae who serve as volunteer ambassadors for the Department to promote and assist ongoing department initiatives and ensure continued success. As snow fell outside — jokingly described by former Mosse fellow and History PhD graduate David Harrisville as Madison’s “second winter” — the two days included engaging presentations by current and former Mosseaner. Beginning with an overview of the history and current activities of the George L. Mosse Program in History, the Mosseaner discussed their work and research, underscoring the importance of continuing George L. Mosse’s vision of international, interdisciplinary, collaborative scholarship.

The first session, “The Mosse Legacy: Pedagogy and Public Engagement,” opened with a video of Mosse himself speaking about his upbringing in Germany and flight from the Nazis. The Mosse Program Director then turned to the Program’s many activities, including the ever-increasing Collected Works of George L. Mosse Series with the University of Wisconsin Press — new editions of Mosse’s originals with new critical introductions, updated bibliographies, and sharper images — and the impressive facts and figures of the program since its founding in 2000.

In total, the Program has assisted nearly five hundred students and faculty fund their studies and carry out research while creating opportunities for further education and training in multiple fields and areas of academia and beyond. The Program continues to grow, with a new fellowship at UW Press, seven 2022-2023 Mosse Graduate Exchange Fellows, and a campaign for the funding and establishment of the Mosse Distinguished Chair in European Cultural and Intellectual History within the UW-Madison Department of History.

Undergraduate Advisor Scott Burkhardt then spoke about the pioneering Mosse-Department partnership to establish the Peer Advisor Program. In addition to advising students, Burkhardt directs and trains the Mosse Peer Advisors, undergraduate students who advise their peers on selecting courses, declaring a history major or certificate (minor), and completing coursework in the most direct, logical path possible. The Peer Advisors give undergraduates a chance to connect with a classmate to make sure they are on track to graduate. Together, the Peer Advisors and Burkhardt have identified essential “Gateway Courses,” classes with not only highest enrollment of incoming or early-career students, but which act as a starting point for further history courses and declaring the major. Peer Advisors contact students in these classes to provide information about the major and additional courses of interest – an effort that has boosted recruitment to both the major and the new certificate.

David Harrisville closed out the first session. During his talk, he introduced the audience to his first book, The Virtuous Wehrmacht: Crafting the Myth of the German Soldier on the Eastern Front, 1941-1944. Harrisville argued that the long-standing myth that arose after 1945 that Wehrmacht soldiers were “virtuous” and solely “following orders to complete their mission” on the Eastern Front actually developed much earlier. Using personal letters of soldiers from the Front, Harrisville convincingly shows how soldiers already during the war had begun to situate themselves, justify their actions, and craft a myth of their actions as necessary and virtuous both in their own imaginations and in how they presented themselves to their families. Harrisville’s research offers key new insights into current understandings of World War II and the Eastern Front, all the more pressing given Russia’s ongoing brutal invasion of Ukraine.

Mosse LGBTQ+ Fellow Ezra Gerard launched the Friday morning session, “Thinking with Mosse: Past, Present, and Future.” Gerard joined the audience in Memorial Union from Berlin, where he is currently conducting dissertation research. Gerard presented on queer childhood in Germany from 1870-1933 and offered a background on noted German sexologist Magnus Hirschfeld and his Institut für Sexualwissenschaft. Gerard’s study is timely given discussions in the United States on trans bodies and the long history of policing women’s bodies.

Professor Javier Samper Vendrell then spoke from the University of Pennsylvania. Samper Vendrell received his PhD from the Department of History in 2015, having also worked with Prof. Mary Louise Roberts, and was a Mosse LGBTQ+ Fellow. Samper Vendrell discussed his first book, The Seduction of Youth: Print Culture and Homosexual Rights in the Weimar Republic, published in 2020 with the University of Toronto Press. He also gave the audience a preview of his new research into how visual representations of the male body and male nude photography have shaped homoerotic desire.

Professor Tony Michels, George L. Mosse Professor of American Jewish History and Director of the Mosse/Weinstein Center for Jewish Studies, introduced the Board of Visitors to Mosse’s book German Jews beyond Judaism and advocated for the importance of Jewish Studies and learning from Jewish history. Michels addressed George L. Mosse’s own relationship to Judaism and the antisemitism Mosse faced in his career. Mosse was the first Jew hired by the UW Department of History and letters of recommendation for him even attested — to the surprise of many members of the Board of Visitors — to his respectability and reliability despite his Jewishness.

Alex Scheepens then spoke to the Board of Visitors about his current research and dissertation, “The Jewish Experience in Hiding in Nazi-Occupied Netherlands, 1940-1945.” Scheepens’ work utilizes sources in Dutch, Hebrew, German, and English, and considers such important factors as urban vs. rural settings, the relationship between the victim (in hiding) and the rescuer, and the roles of class, gender, age, family status, and more. Scheepens will continue his research for the 2022-2023 academic year in Jerusalem as a Mosse Graduate Exchange Fellow, allowing him direct access to the archives at Yad Vashem.

Afterwards, Anastasia Bruss and Maddy McGlone discussed their time as Mosse Interns in Digital and European History. Bruss spoke of the campus’ architectural development, particularly at the hands of Prof. Leo Jakobson, who helped design many of the buildings on campus today. McGlone spoke about documenting COVID-19 across campus and the ever-changing dynamics of pandemic life. McGlone also noted her involvement in working through interviews recorded as part of the Mosse Oral History Project.

Over the two sessions, the Mosseaner introduced the Board of Visitors to some of the activities of the George L. Mosse Program in History. As 2022 continues, even more events and programming are in the works, including new volumes in both the Collected Works series along with the George L. Mosse Series in the History of European Culture, Sexuality, and Ideas. The first George L. Mosse Lectures since the pandemic began will be held in November, with Elisheva Carlebach (Columbia University) scheduled to speak in Madison, and the Graduate and Faculty Exchanges are once again underway as travel restrictions ease. George’s wish for international collaboration and scholarship continues! 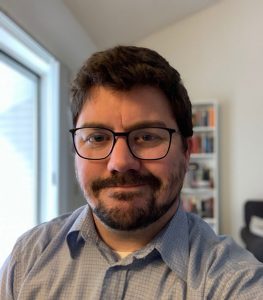 Matthew M. Greene is a PhD candidate in the Department of German, Nordic, and Slavic+ at the University of Wisconsin-Madison. His dissertation considers the role of language in world literature, focusing on semantic shift, narration, form, and translation in German-language texts. He has several English translations in publication from German, Yiddish, Spanish, Italian, and French. At UW-Madison, he has taught a variety of German language as well as Yiddish history, culture, and literature courses. He holds an MA from UW-Madison in German, an MA from Dartmouth College in Comparative Literature, and a BA from the University of Vermont in European Studies, German, and Italian.