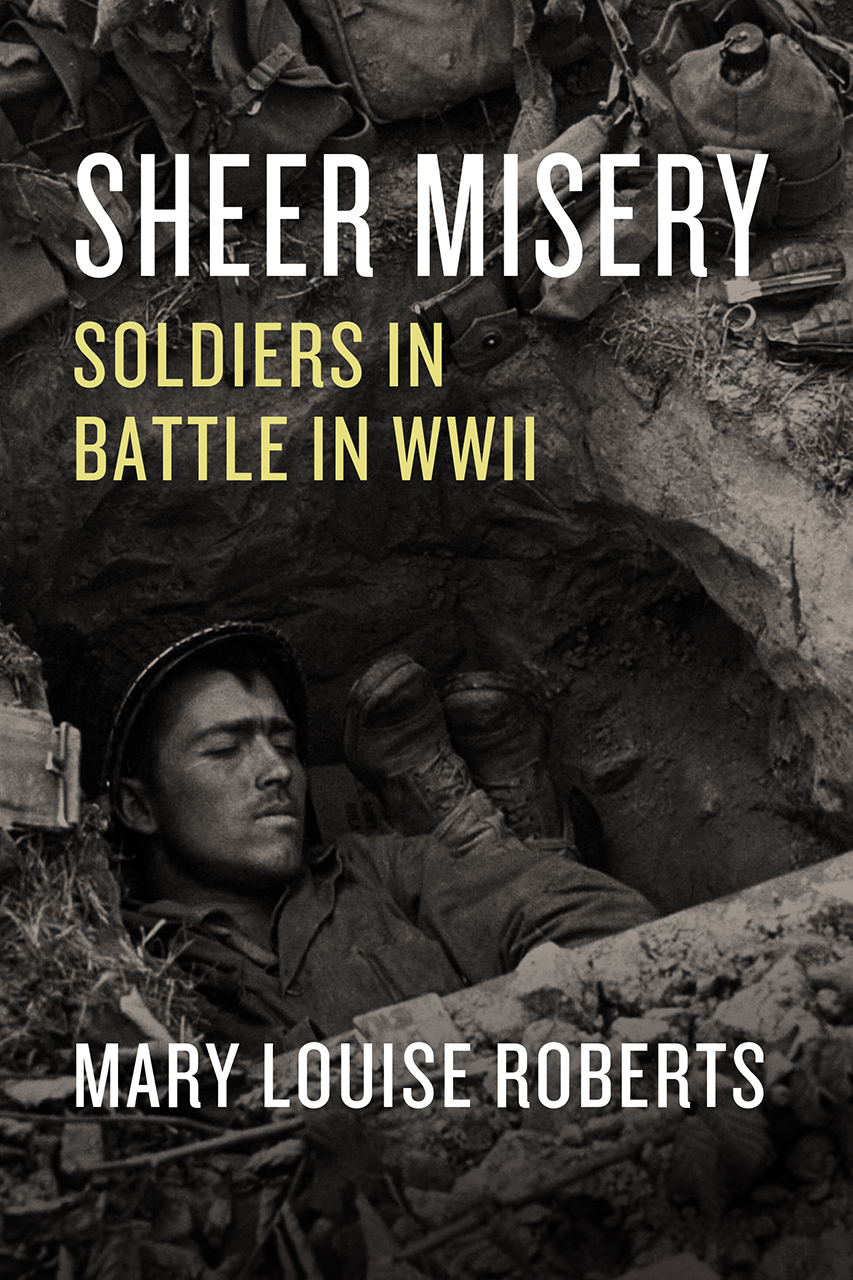 In Sheer Misery: Soldiers in Battle in WWII, Mary Louise Roberts examines the physical and mental lives of infantrymen fighting on the Western Front from 1943 to 1945. “Dogfaces,” “dough feet,” “the poor bloody infantry” – these were what soldiers in Europe called themselves. They neither knew nor cared much about their generals’ plans, and instead filled diaries with sensory descriptions of the front, like the sound of artillery shells, the taste of rations, and the sight of corpses. Roberts uses these accounts to create a “somatic history of war” centered on three “high-water marks of infantry misery:” the Allied attempts to break through the Winter Line in Italy, the bloody fighting in Normandy after D-Day, and the battles in Holland and the Ardennes during the final winter of the war. (3-4) Sheer Misery provides a compelling account of the hardships that World War II foot soldiers bore, and at the same time offers historians stimulating new ways to think about wartime sources.

Sheer Misery’s five chapters compose a “loosely structured set of essays,” each analyzing a specific physical experience in detail. (3) For example, chapter three, “The Foot,” discusses soldiers’ views on trench foot, the skin rot which set in when men went too long without removing soaked boots and socks. Each chapter is brimming with firsthand accounts from dozens of diaries and memoirs, some of them very obscure. Roberts draws mostly from the American and British perspectives, with the occasional quote from French and German sources to show that infantry suffering transcended army lines.

The overarching theme of these essays is the conflict between regular soldiers and their commanders over control of the body. Military authorities saw management of the body as the key to producing fit and obedient troops. Basic training taught men to ignore their bodies’ limitations, while manuals regulated even the smallest details of bodily hygiene, reminding recruits, for instance, that bowels were to be moved “regularly once each day at as nearly the same time as possible.” (45) Medical authorities created a hierarchy of bodily standards; by 1945 the British army had four grades A through D and 92 subcategories with which to rank a body’s fitness for war. Roberts explains how this military logic aimed to turn individuals into abstract units of violence by disciplining their bodies.

But control of men’s bodies broke down on the frontline. War made bodies filthy, damaged, and sick. Artillery shells tore off limbs, and dysentery ran so rampant in American battalions that troops took to calling diarrhea “the GIs.” Combat revealed the paradox of military logic: armies demanded that infantrymen remain healthy and clean, and simultaneously put them in positions that made it impossible to do so.

And combat troops developed their own ideas about what it meant to be a body at war. In chapter one, “The Senses,” Roberts lays out the meanings infantrymen attached to physical experiences. The ability to distinguish types of gunfire by their sound separated the veterans from the replacements. Smell, too, functioned as an indicator of a man’s worth. Everyone stank at the front, but losing control of your bowels was humiliating, which was why GIs called cowards “pants-shitters.” Food also weighed heavily on infantrymen’s minds. Men dreamed of home-cooked meals and griped about bland army rations, which they considered evidence of their poor treatment by an ungrateful high command. Roberts offers insight on wartime memoirs by showing how infantrymen used their senses to survive and comprehend the battlefield.

Soldiers’ bodies often put them at odds with the military establishment. In chapter two, “The Dirty Body,” Roberts showcases the unusual feud between General George Patton (1885-1945) and Sergeant Bill Mauldin (1921-2003), creator of the cartoon characters Willie and Joe. Mauldin’s fictional GIs incensed Patton because of their dirtiness. When Patton met Mauldin in 1945, he accused him of trying “to start a goddamn mutiny.” (42) To commanders, poor hygiene signified bad discipline. American and British officers insisted on spotlessness even in places like the frozen Apennines, where they forced men to shave with ice-cold water or locked them up when they appeared on leave with muddy uniforms. While an obsession with cleanliness reflected army training, Patton was hopelessly out of touch with the way ordinary soldiers perceived dirt. GIs loved Mauldin’s cartoon because they saw themselves in its grimy, miserable characters. Everyone at the front knew that a real combat soldier was not clean like Patton – he was dirty like Willie and Joe.

Dirt was unavoidable at the front, but trench foot was preventable. Yet in 1944 and 1945 the condition afflicted over 46,000 American infantrymen. In chapter three, Roberts asks why US forces in Europe suffered from trench foot so severely. One reason was the poor quality of GI boots, but Roberts argues that “at a more profound level, trench foot emerged as a result of the military logic governing the infantryman’s body.” (67) In order to turn men into manpower, army training focused on endurance and discouraged recruits from showing signs of weakness. This toughening up worked too well, for on the battlefield, where bodies did break down, many troops either ignored or did not notice the signs. When trench foot ravaged American lines during the winter as a result, the army blamed its own soldiers for “poor foot discipline.” (89) As with dirt, the army put men in an unwinnable position, this time by demanding they remain healthy but also endure their pain stoically. Had the military thought about soldiers more as individual bodies than as strategic components, it might have avoided such losses.

In chapter four, “The Wound,” Roberts looks at how British soldiers and medical personnel talked about being wounded during the Italian campaign. Tommies had a hierarchy of injuries. Some were cause for celebration: the much-desired “Blighty ones,” which sent a soldier home to England but did not cause long-term damage. A wound in the rear-end was not a bad outcome either, although it meant endless ribbing from your mates. A bullet to the hand or foot could be shameful if it suggested a self-inflicted injury. Blindness and genital mutilation were feared more than death. Wounds had different meanings in field hospitals, where the triage system prioritized returning men to the battlefield, which required operating on savable cases rather than the most severely hurt. Surgeons faced difficult choices about which bodies to save and quarreled with rear-echelon doctors who viewed bodies only in strategic terms. Finally, the British military transported dead and wounded soldiers at night to hide them from the public. In describing the stories of damaged bodies, Roberts criticizes historians who replicate this concealment by reducing the wounded and dead to casualty figures while ignoring their suffering.

Roberts concludes with chapter five, “The Corpse.” Dead bodies were an unavoidable sight on the Western Front, and like the wounded they bore different meanings depending on who was looking at them. To commanders, corpses were a strategic problem to be cleaned up. Units listed their killed-in-action as “dead stock,” and Graves Registration teams piled up fallen US troops and their personal effects like logs. To soldiers, the dead and their treatment served as reminders of their own expendability. GIs treated the fallen with respect, even dead Germans, most of the time. By doing so they sought to assert the human dignity of infantrymen in a war which constantly denied it.

Sheer Misery is a visceral account of life in war, but it is also much more. Roberts’s analysis of the “language of sense” in official documents and combat narratives reveals how bodies in wartime were both sites of control and avenues of resistance. Military historians will find many engaging arguments in Sheer Misery’s chapters, although the essay format sometimes limits the book’s scope. For example, how did military logic of the body differ between separate nations? US generals come in for the heaviest criticism in these chapters for their failure to take care of men’s health. By contrast, Roberts suggests that the British Army was more sparing of soldiers’ bodies because of experience gained in the First World War and Britain’s comparative dearth of manpower. A separate conclusion would have provided Roberts with space to develop these arguments and their place in the wider historiography.

This volume will appeal to general readers and scholars alike. It should be assigned reading for undergraduates learning about the Second World War and for graduate students on how to use soldiers’ testimonies. It is an empathetic, sharp analysis of a wide array of transnational sources. Most of all, it is a reminder that even history’s largest industrial war was fought at the end of the day by human bodies, and that it was the infantryman’s body which suffered most. 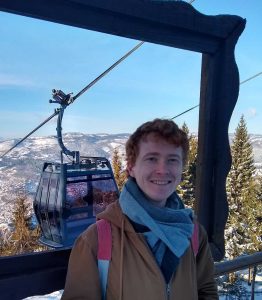 Conrad Allen is a PhD candidate and George L. Mosse European Cultural History Fellow at the University of Wisconsin-Madison. He received his M.A. in history from UW in 2018 and his B.A. from the Ohio State University in 2016. In his M.A. thesis he looked at how aristocratic ideas of manliness shaped British cavalry and tank tactics during the world wars. His current research focuses on the reconstruction of the French Army during World War II.