As a historical figure, Sir Sayyid Ahmad Khan (1817-1898) is frequently characterized as a leader of Muslim nationalism in India and a reformer of both Islam and education.[1] Throughout his life he established several educational institutions, publications, and societies. Most famous is the Muhammadan Anglo-Oriental College, established in 1875, now called Aligarh Muslim University. While he is quite a famous figure in South Asia, his contributions to science education and popularization are relatively unknown.

I first became interested in Sayyid Ahmad’s views on human evolution and the reception of Darwinism for Muslims in India in 2015, when, at the beginning of my PhD program, I came across Marwa Elshakry’s excellent book, Reading Darwin in Arabic (2013). She only very briefly mentioned Sayyid Ahmad and his attempt at reconciling Darwin’s theories with Islam, which encouraged me to begin the hunt for primary sources. Soon I realized that the topic was more complicated that it seemed. To start with, I began looking into Sayyid Ahmad’s early life. Luckily for me, when I began working on this project, it coincided with Sayyid Ahmad’s bicentennial celebrations. As a result, many archives published documents online and suddenly many primary sources became accessible at the click of a button. Over 100,000 pages were digitized. I was also able to find many primary sources at Robarts Library in Toronto.

Based on my preliminary research, I found a few different areas of Sayyid Ahmad’s life that can be categorized under the banner of science popularization. Between 1844 and 1854, for instance, he published several articles and books that were attempts to translate or spread scientific knowledge. In 1864, he established The Scientific Society in Ghazipur, India. This society was founded with the intention of translating key scientific and historical texts from English to Urdu, thus making them accessible to Indians. Here I want to present an overview of some of his publications and show how going back to a key historical figure in a different historical setting can lead to new avenues of research.

Those unfamiliar with the history of British rule in India, the East India Company (EIC), established in 1600, was operating in India since 1611, but gained the diwani (“the rights revenue collection”) for Bengal in 1765, slowly consolidating their power over the subcontinent.[2] In 1858, following rebellions in India, power was handed over to the British Crown until the partition of India in 1947 and the subsequent creation of Pakistan.

While his family had served in the Mughal courts, around 1838 Sayyid Ahmad joined the East India Company as a petty court official. In 1844, he published an Urdu translation of a Persian text titled Tashil fi Jar-e Saqil (roughly translates to “principles of machines”). In this text he wrote about five machines or contraptions and discussed their relevance and provided details about how to construct them. He wrote their Farsi names and then provided the Urdu/Hindi equivalent. Their various functions included lifting heavy loads from one place to the next, compressing matter, and breaking hard things.

In 1846 he published Fawa’id Al-afkarfi iImal Al-firjar (“Advice for the use of the [mathematical] compass”). This text was an Urdu translation of a Persian source, but this time the original was compiled by his maternal grandfather, Khawaja Fariduddin. He provided descriptions for many diagrams. For example, he drew a picture of a circle and provided corresponding names for the sections. Using this circle as the basic diagram, the rest of the text provides more complex examples.

The following year, he published the first version of his archeological study of Delhi titled Asar-al-Sanadid (“The Remnants of Ancient Heroes”) in Urdu.[3] The second volume, published in 1854, was significantly different from the first. This change is quite well documented by historians of South Asia.[4] The second volume was translated into French by orientalist Joseph Héliodore Sagesse Garcin de Tassy (1794-1878) and earned Sayyid Ahmad an honorary membership in the Royal Asiatic Society of Great Britain in 1865.[5]

In 1848, he published Qaul-i-Matin dar Ibtal-i-Harkat I Zamin (“Firm Assertion with Regards to the False Motion of the Earth”). In it, he argued that the Earth was stationary, but would later criticize his own position.

Between 1862 and 1865, Sayyid Ahmad published two volumes of The Mahomedan Commentary on the Holy Bible. In it, he tried to show similarities between the Qur’an and the Bible. In the text there are arguments about the relationship between scientific inquiry and religious scriptures.

In the Commentary Sayyid Ahmad didn’t claim that Islamic scriptures were incorrect on the matter of Earth’s motion, but outlined how developments in Greek astronomy shaped early Islamic interpretations on the topic.

The Commentary was self-published by him in three volumes. In 1862, when Sayyid Ahmad was transferred to Ghazipur, he purchased his own private printing press and employed several scribes to help with his translations. The text is written for two audiences, the British imperialists and the Muslims in India. The bilingual nature of the publication is evidence that he wrote for two different sets of readers. Each page is split down the middle with one side written in Urdu and the other in English. There is also the occasional Hebrew word in the text. Sayyid Ahmad pointed to verses from the Qur’an that corresponded to views in the Bible. His aim was to show the similarities between Islamic and Christian religious beliefs. By doing so, he also undermined negative conceptions of Muslims. At the same time, given the dual nature of the publication, he also addressed false astronomical notions held by some Muslims. The Commentary dealt with a wide range of religious topics, from the reliability of Biblical sources to the discussion of the origin of life. He brought up religious issues with some aspects of astronomy on numerous occasions because of how closely they were tied to theories of the time.

In 1864, Sayyid Ahmad established The Scientific Society in Ghazipur, India. The aim of this society were two-fold: To translate texts from arts and sciences and search for and publish rare and valuable oriental works. While the bylaws of the society stated that no religious texts would be discussed there, he was working on the Commentary at the same time. In its first year alone, the focus of the society expanded and members raised funds to build an institute where the group could meet and store their collections. By 1866, the society developed a series of public lectures, and even published a journal, The Aligarh Institute Gazette, to keep members informed. In 1869, he visited London and Cambridge to work on another book. He then went back to India in 1870 and began working on his next major project: The Muhammadan Anglo-Oriental College (est. 1875). As of 1920, it was given the status of a university and is now called Aligarh Muslim University (AMU).

Sir Sayyid Ahmad Khan was an important nineteenth-century science popularizer in South Asia, whose works reached elite audiences in places like Delhi, Bijor, Ghazipur and Aligarh. The next step of my own project is to place Sayyid Ahmad in London and examine the science education debates that took place at Oxford and Cambridge in the late 1860s. I will then return to the foundation of the Muhammadan Anglo-Oriental College and compare it with Sayyid Ahmad’s Oxbridge connections. This makes the story of science education a rather global account.
___ 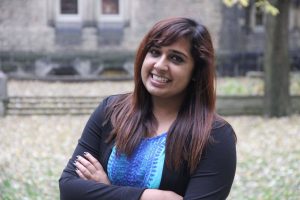 I am a PhD candidate at the University of Toronto’s Institute for the History and Philosophy of Science and Technology, where I am working on a dissertation on the history of science and Islam in British India. My thesis situates Sir Sayyid Ahmad Khan (1817-1898) as a key figure in this context. Through an interdisciplinary approach I investigate the development and implementation of Sayyid Ahmad’s science popularization agenda.