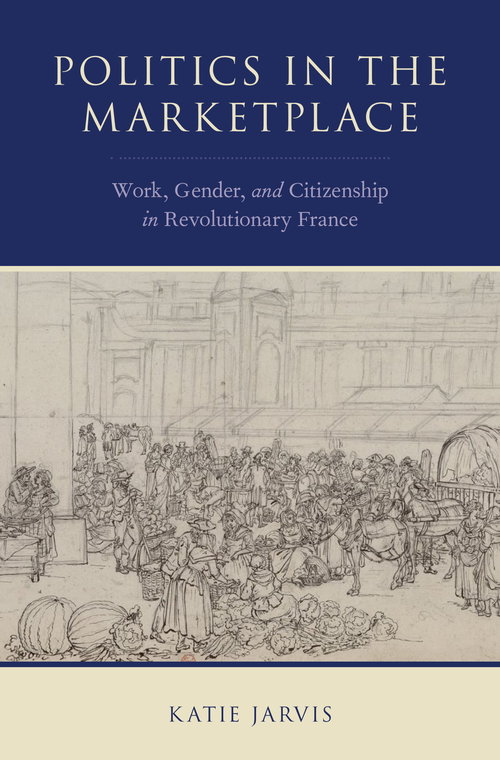 No one understood better than George L. Mosse that “citizenship” is a tricky notion, a site where legal categorizations, identities, and individual or familial strategies intermingle in myriad ways. Mosse lost his own primary citizenship through the stroke of a Nazi pen in 1935. Much later in life, he liked to mention half-jokingly that he would always keep the Luxembourgish passport he had acquired later in the 1930s. After all, who knew what emergencies might arise in the future?[1] Hence it is fitting that an especially fascinating contribution to the history of citizenship should have come from a UW-Madison graduate and former Mosse Teaching Fellow, Katie Jarvis. More precisely, in her recent book, Politics in the Marketplace, Jarvis employs the category of “economic citizenship” to explore the everyday political lives of a thousand Parisian market women, the Dames des Halles, in the French Revolution. Drawing on legal and police records, revolutionary pamphlets, and a host of other sources, Jarvis argues that the Dames fought with considerable success for recognition of their economic citizenship throughout the decade of 1789-99. They defined their place and their rights within the body politic based not on their innate humanity, but on the services they offered the nation as revolutionary activists, soldiers’ wives, and patriotic mothers, and above all on their useful work as retail merchants.

Jarvis has given her book a loosely chronological structure, allowing the reader to grasp how the market women repeatedly recast their case for citizenship in volatile revolutionary circumstances. The Dames’ Old Regime heritage as recipients of royal charity and symbolic representatives of the popular classes gave them a head start as revolutionary players. They put pressure on the royal family—most effectively in the October Days of 1789—and garnered approval for publicly spanking ‘aristocratic’ Parisian nuns in the spring of 1791 (chapters 1 and 2). But as the logic of Old Regime corporate privilege collapsed, and as Louis XVI lost the respect of the French people before losing his head, the Dames focused more and more on how their economic role could harmonize with the core revolutionary values of liberty, equality, and fraternity. They navigated issues of public space, currency reforms, and price controls, always insisting that they deserved some measure of protection from the state in return for the useful everyday services they provided as retail food merchants (chapters 3-6). Finally, even after the fall of Robespierre, when the elbow room for popular activism shrank dramatically, the Dames still managed for several more years to hang on to economic citizenship by interpreting their “Commercial Licenses as Political Contracts” (the title of chapter 7).

By pointing out these varieties of the Dames’ experience, Jarvis emphasizes “contingent” tactics (236), shifting understandings of citizenship, and the overall “fluidity” (10) of the revolutionary process. As told in Politics in the Marketplace, the Dames’ story not only reminds us that the French Revolution took countless turns, but also suggests that many of these turns could have easily been taken in very different directions. Consider, for example, the book’s fifth chapter, the article version of which won the 2018 Clifford Prize for “an outstanding study of some aspect of eighteenth-century culture,” awarded by the American Society for Eighteenth-Century Studies. In this chapter, Jarvis criticizes a commonplace argument about gender and the French Revolution that leaves little space for contingency and fluidity. That argument holds that certain basic presuppositions, gleaned from Rousseau and shared by (male) revolutionaries from 1789 onwards, necessarily led them to define the realm of full public citizenship as a men’s world and to relegate women to the private sphere.

Jarvis revisits a lynchpin of that interpretation, namely, the ban on women’s political clubs pronounced by the French National Convention in October 1793. She does so by zooming in on what immediately preceded and triggered the legislators’ decision: a giant fistfight between the Dames des Halles and members of the Société des Citoyennes républicaines révolutionnaires, a club of radical female activists. These Citoyennes républicaines defended a general price cap on important foodstuffs that eased many ordinary Parisians’ struggle for subsistence but also annihilated the retailers’ profit margins. In siding with the Dames and coming up with the solution of banning women’s clubs, leaders of the Montagnard faction in the Convention did mobilize a misogynistic trope about female irrationality causing female violence. But, as Jarvis shows, they used that trope more as “a convenient screen” (137) than as a consistent principle. They seized on the occasion of the women’s brawl—but not to set in stone the impossibility of full female citizenship. Rather, they hoped primarily to boost their own supportive but flexible approach to the price cap against both champions of a freer market and the Citoyennes républicaines who, together with their male allies, pushed for a very rigid implementation of the cap. From Jarvis’s reinterpretation, the ban on women’s clubs emerges as an episode in the struggle for a just marketplace, an episode in which gender appears as “a dynamic, fluid, and contingent component of citizenship instead of its immobile Rousseauian cornerstone” (166).

Jarvis is neither the only nor the first interpreter of the French Revolution to enact such a shift to contingency,[2] but her move contributes significantly to a fresh view of the French Revolution as a process. For a long time, the most prominent scholars in the field leaned toward what we might call a steamroller theory of the Revolution. Seemingly, its massive outcomes could only have been produced by adequately massive causes, and many historians preferred to identify one overpowering cause, the steamroller—whether capitalist development (Georges Lefebvre, Albert Soboul) or an overinvestment in discourses of political will to fill the power vacuum of 1789 (François Furet, Keith Baker). By contrast, Politics in the Marketplace brings us closer to a butterfly-effect theory of the revolutionary process. A relatively small conflict, such as the showdown between the Dames des Halles and the Citoyennes révolutionnaires, could shift the future of both economic and gendered citizenship. None of this implies that future historians can or should conceive of the Revolution exclusively in terms of butterfly effects or turning points. But Jarvis’s merit consists in detecting contingency in some important revolutionary moments.

Therefore, even while placing “Work” first in the subtitle of her book, Jarvis does not simply claim that “it’s the economy, stupid.” Hers is not a reductive economic history, one that would fantasize about capitalism as, again, the great steamroller of historical development. Rather, in Jarvis’s brand of economic history the marketplace becomes highly responsive to gendered, legal, and political developments. More strikingly perhaps, the free-range economic history of Politics in the Marketplace challenges intellectual history by discussing such supposedly lofty concepts as citizenship, social contract, or body politic in the most down-to-earth contexts of ordinary working women’s lives. For example, Jarvis writes that “to the Dames in the market, the social contract smelled like melting cheese, tasted like ripe fruit, and felt like soft butter. It took the form of merchants and consumers haggling over prices and cutting deals on credit” (231). I admit that I had to reread these sentences before seeing more than apparently incongruous imagery. Ideas don’t smell, do they? But indeed, the Dames des Halles appropriated the notion of citizenship in ways that should draw historians’ attention more to the very concrete—and contingent—uses of an idea than to any abstract and elusive semantic core. In this way, too, it may be rather fitting to present Katie Jarvis’s book on a blog dedicated to George L. Mosse, who delivered his challenge to traditional intellectual history half a century ago, when he embraced a broad cultural approach to modern European thought.

[Full disclosure: As historians, Katie Jarvis and I are both shaped by a UW-Madison graduate education and by our common Doktormutter Suzanne Desan. Therefore, I hope readers will appreciate that, in the text above, I have not fully performed the “critical distance” that usually marks the genre of scholarly book reviews. Instead, my goals were merely to summarize the book’s most salient arguments and to reflect on why Jarvis’s historiographical intervention matters.]

[2] Cf., e.g., Timothy Tackett, The Coming of the Terror in the French Revolution (Cambridge, MA: Harvard UP, 2015), 342: the revolutionaries of 1789 became the ‘terrorists’ of 1794 not by sheer necessity or by sticking to some iron-clad principle, but through a particular “concatenation of developments emerging out of the very process of the Revolution itself.”

Kilian Harrer is a doctoral student in the History Department at the University of Wisconsin-Madison. His primary research interests revolve around the relationship of religion and politics in eighteenth-century Europe (from the Enlightenment through the age of Napoleon). A former Project Assistant of the George L. Mosse Program, he is currently on an International Dissertation Research Fellowship awarded by the Social Science Research Council, and is scouring archives and libraries for source material on pilgrims, processions, and police in European borderlands, c. 1770-1815. He holds a B.A. and M.A. in history from the Ludwig-Maximilians-Universität München, Germany.