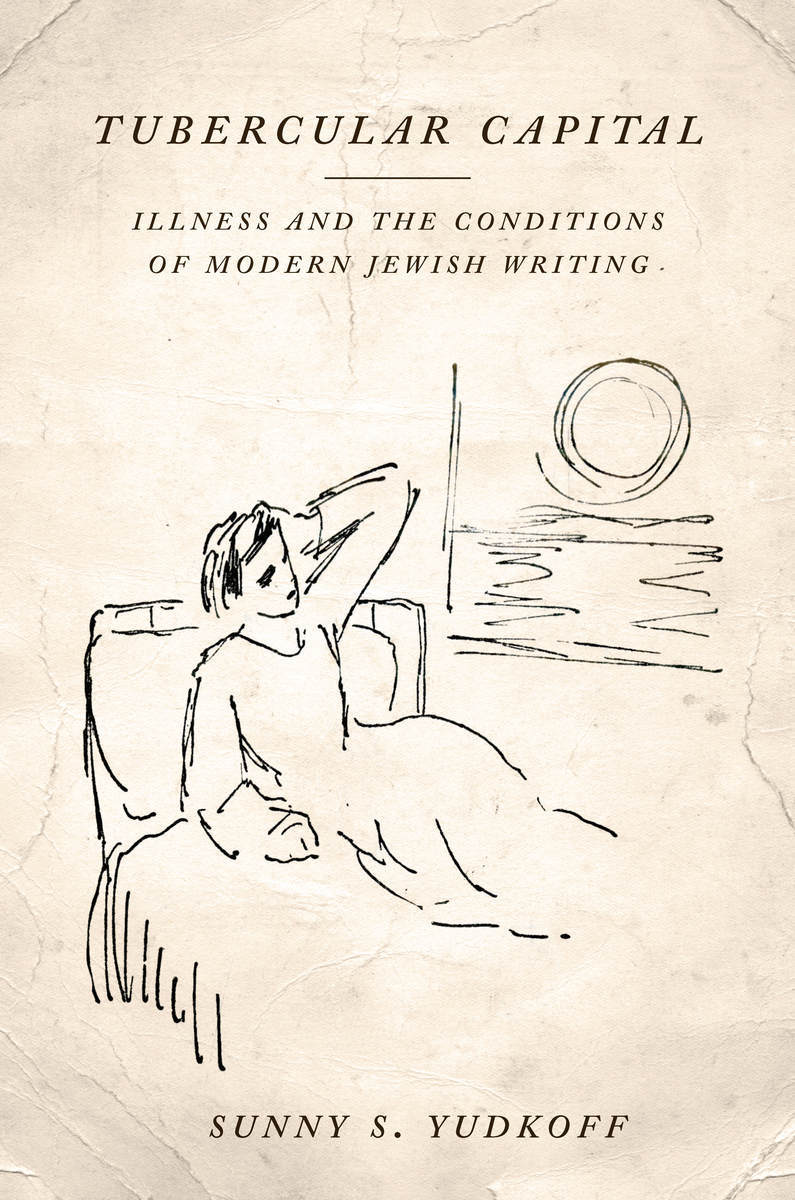 Sunny Yudkoff’s recent monograph, Tubercular Capital: Illness and the Conditions of Modern Jewish Writing, presents a fresh study of the production of Hebrew and Yiddish literature in the first half of the twentieth century. Bridging the emerging field of the medical humanities with literary and cultural studies, the book provides a compelling case for why the accidental and commonplace occurrence of contracting tuberculosis in the early twentieth century proved to be a consequential factor for Yiddish and Hebrew writers active in the world of Jewish literary production. Working with literature written across three continents, while paying close attention to the personal and bodily lives of Jewish writers, their reputation and reception, Yudkoff’s new study provides a comprehensive exploration of the relationship between the disease of tubercular consumption and the consumption of literature – a pun, which the book does not fail to exploit cleverly.

Yudkoff introduces the reader to the idea of “tubercular capital” as the central theoretical tool of her analysis. The introduction clearly lays out the book’s unifying claim that tuberculosis, even as it incapacitated Jewish writers and was essentially a harbinger of death, “provided a generative context for the development of their writing and the fashioning of their literary reputations,” and furthermore, proved to be a “critical mediator in the creation, dissemination, and reception of modern Yiddish and Hebrew writing.”[1] Drawing on the classic thought of Pierre Bourdieu and the more contemporary work of Pascale Casanova, Yudkoff argues that a tubercular diagnosis provided writers with a form of capital that was adaptable and applicable to different geographical contexts and the respective linguistic and cultural traditions in which Jewish writers operated. Between America, Eastern and Western Europe, and Palestine, Yudkoff argues that tuberculosis was constructive of a “robust, transnational, and multicultural Jewish literary republic.”[2]

The introduction then moves efficiently through the various literary and political valences of tuberculosis in world literature, from the association between the tuberculosis and beauty and creative genius in Victorian and Romanic literature, to the disease as the symbol of capitalist oppression in socialist literary tropes. At the same time, the book promises to concretize “tubercular capital” as it redirects the reader’s attention to the role that that networks of “medical professionals and institutions including health officials, doctors, sanatoria and hospitals” played in determining the “art and arc” of modern Hebrew and Yiddish writing.[3]

The first chapter makes a strong case for how tubercular capital affected the literary, physical and professional life of Sholem Aleichem (pseudonym of Shalom Rabinovitz, 1859–1916), the most celebrated of Yiddish writers. An engaging narrative details how the public display and perception of Sholem Aleichem’s coughing fits and subsequent collapse at a literary event led to the organization of a fundraising Jubilee, which not only sponsored the writer’s recuperation but also bolstered his literary fame. Working around the juncture of tubercular capital and reader response, Yudkoff boldly argues that Sholem Aleichem’s readers “blamed themselves for the author’s condition,” and sensed that they must relinquish the passive occupation as readers and consumers of his fiction by taking responsibility for their beloved author’s health. The effect of tubercular capital on reader response is elucidated in Yudkoff’s analysis of the much discussed epitaph on Sholem Aleichem’s grave, in which the author declares that “he’s been ill, only as God knows/ in secret, so no one would see.” Yudkoff explains that “even after his death, the literary figure would continue to compel his graveside visitors to consider whether or not they ignored his suffering during his lifetime,” and thus “manipulate his audiences’ guilt” using the tubercular capital at his disposal.[4]

The second chapter takes the reader from Yiddish to Hebrew and from Europe to 1920s Palestine to examine the writing of the Hebrew poet Rachel (Rachel Bluvstein, 1890-1931). Taking note of the Victorian and Romantic significance of the poetic “sickroom,” the chapter details how Rachel was able to transform the various rooms to which she confined herself while she was suffering from tuberculosis into spaces of creative control. This chapter advances an important elucidation of the perception of tuberculosis by the Zionist pioneer and labor movement, to which Rachel belonged. In contrast to European sentiments linking tuberculosis to literary genius and creativity, the worldview of the yishuv, dominated by the cult of health and the ideology of the “New Hebrew Man,” did not ascribe any positive signification to the notorious “writers’ disease.” “If there was a disease that acquired mythic status among labor Zionists,” Yudkoff explains, “it was not tuberculosis but malaria” – the agricultural workers’ disease contracted by the halutzim while farming near swamps.[5] A similar mode of thinking guided the perception of the poetic “sickroom.” Unlike its value in Victorian and Romantic tropes, Rachel’s urban sickroom “was not a recognized space of poetic inspiration” or a site of “imperial sacrifice or productivity […] in a Palestinian Hebrew literary conversation increasingly saturated by agricultural vistas.”[6] Yet, despite the disadvantage that tuberculosis conferred on Rachel vis-à-vis the kibbutz movement, Yudkoff shows how Rachel managed to negotiate her ideological commitment to labor Zionism from the confines of her various sickrooms on the Tel Aviv beachfront, in which she developed her oeuvre as a “poetic point of origin at distinct odds with Zionist cultural ideas.”[7]

The third chapter transports the reader from the personal to the institutional, and from Palestine to the mountainous landscape of Denver, Colorado, as it narrates the story of the writers of the “Jewish Consumptives’ Relief Society,” the JCRS. Yudkoff foregrounds the way in which this medical institution connected literary productivity with the collective experience of tuberculosis by offering consumptive Jewish writers “new publishing venues, new opportunities to be translated, and new forums in which to craft their literary and poetic identities.”[8] Founded by the Russian Jewish immigrant Dr. Charles Spivak as an institution for the recuperation of indigent Jews, the JCRS was home to some of the most celebrated Yiddish writers of the 20s and 30s. At the heart of this chapter is the story of the famed Yiddish poet and translator Yehoash (Solomon Bloomgarden, 1872-1927), who, while visibly taken with consumption, undertook extensive trips and reading tours of Yiddish literature to raise money for the institution.[9] Writing under the tubercular penname “Lung-Fellow,” the chapter also examines Yehoash’s ventures into English letters (including his translation of Henry Wadsworth Longfellow’s Native American themed epic “The Song of Hiawatha”) first, as a means of recruiting funds, and then as an independent artistic endeavor. When Yehoash’s fundraising literary tour passes through New York, he overlaps with a similar literary event organized for Sholem Aleichem’s benefit – a fascinating historical anecdote which shows how Yudkoff’s various narratives intertwine.

Traversing geographic, cultural and linguistic boundaries, Yudkoff’s study has woven Jewish writers’ experiences of tuberculosis into a transcultural web of meaning that determined the production of Hebrew and Yiddish writing in the early twentieth century. Written with scholarly richness and skillful prose, Tubercular Capital, despite its often somber subject-matter, forms a pleasant experience for the reader, allowing a rare “behind the scenes” exploration of Jewish literary production. Yudkoff’s study makes a highly valuable contribution to our understanding of the development of Hebrew and Yiddish literatures, their relation to the fields of literature and illness, and the theory and history of literary production.

Marina Zilbergerts is an Assistant Professor of Jewish Literature and Thought in the Department of German, Nordic, and Slavic and at the Center for Jewish Studies at UW-Madison.