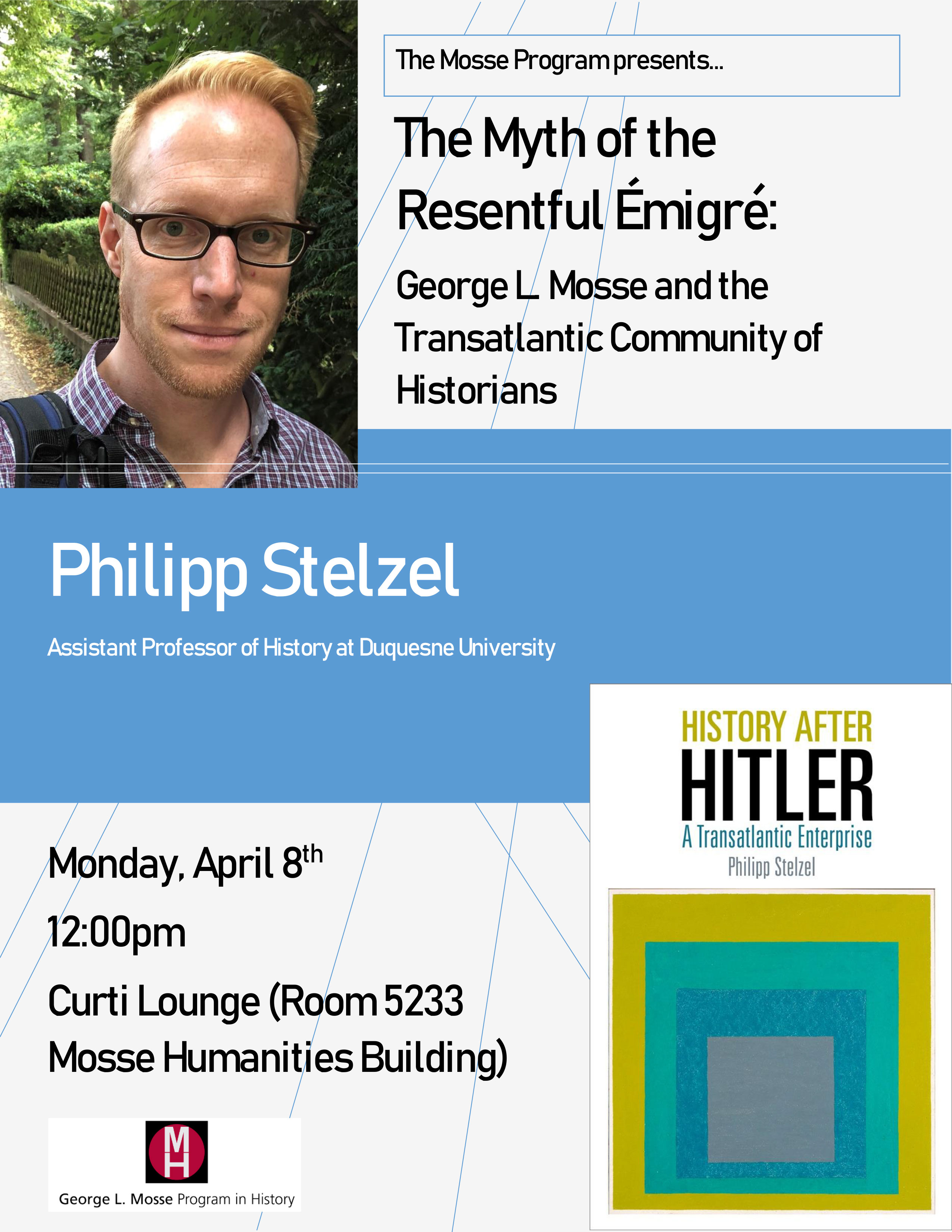 After World War II many Germans viewed German-Jewish émigrés’ perspectives on German history—perspectives like George L. Mosse’s—with suspicion, as they believed them to be clouded by “émigré resentment.” German historian Gerhard Ritter spoke for many of his colleagues when he wrote in 1949: “writings on the German problem by German émigrés in England and the United States have often been confusing rather than enlightening. Where it rules without restraint, resentment is not a fertile soil for sober and objective history, and long-term alienation from Germany easily leads to a distorted view of reality.”[1]

Yet in reality, those émigré historians, forced out of Germany by the Nazis and now teaching in the United States, adopted a diverse set of approaches to German history. George L. Mosse saw this diversity as a result of their very different personal experiences in Nazi Germany, as he told his fellow émigré Peter Gay in 1998. That year, Gay had published his memoirs My German Question, in which he described his childhood and teenage years in Nazi Berlin. After reading the memoir, Mosse wrote to Gay: “Our lives diverge radically by the fact that I left Germany forcibly already in late February 1933 so that I missed living under National Socialism. I suppose this has colored my totally unsentimental attitude towards Germany, especially after the war when I had to interview so many former National Socialists. I admire how you have come to terms with your experience.”[2] Unlike Mosse, Peter Gay’s family had not left Nazi Germany until 1939.

Mosse, Gay, and other members of the second-generation German émigré historians transformed the field of German history in the United States after World War II. Whereas émigrés of the first generation, such as Felix Gilbert, Hans Rosenberg, and Hajo Holborn, received their academic training in Germany, scholars of the second generation left Germany as children or teenagers and were educated in the United States. Besides Mosse and Gay, this second generation included scholars such as Fritz Stern, Klaus Epstein, Gerhard Weinberg, Georg Iggers, Renate Bridenthal, Joachim Remak, Mosse’s Madison colleagues Gerda Lerner and Theodore Hamerow (who, unlike the others, had Austrian and Polish roots, respectively), and Walter Laqueur, with whom Mosse co-founded the Journal of Contemporary History.[3]

In contrast to Peter Gay, whose memoirs vividly describe his postwar reservations about setting foot again in Germany, some of the émigrés established relations with their West German colleagues early in their careers.[4] Already in 1955-1956, for example, Klaus Epstein, spent a year at the University of Hamburg on a Fulbright lectureship. Similarly, Fritz Stern soon forged contacts with German academics. During the summer of 1954, he taught as a visiting professor at the Free University of Berlin, where he was struck by the stark contrast between “the prevailing silences of much public discourse” and his students’ “willingness to confront the complexities of the past and to explore Germany’s troubled relationship with the West.”[5] With a “permanent visiting professorship” at the University of Konstanz, which Stern received in 1967, his position in the transatlantic community of historians became more institutionalized. Together with Hans Kohn, Leonard Krieger, and George Mosse, Stern wrote a cultural and intellectual history of modern Germany without a real equivalent in the Federal Republic.[6]

At times, second-generation émigrés also directly intervened in German academic debates. Gerhard Weinberg, for example, battled apologetic historical interpretations popular in West Germany through frequent publications in German journals. In the 1950s, he strongly opposed German historians who claimed that Operation Barbarossa, Nazi Germany’s invasion of the Soviet Union, had been a “preventive war.” Ten years later, Weinberg was similarly outspoken in his condemnation of David L. Hoggan’s attempt to portray the outbreak of World War II as a result of the supposedly conspiratorial diplomacy of Great Britain and Poland.[7]

The best-known example of an émigré intervention, however, was the Fischer-Kontroverse about the origins and the course of World War I, with Klaus Epstein and Fritz Stern leading the American opposition to the German censorship of Fritz Fischer’s views. Early in 1964, Fischer’s lecture tour to the United States, funded by the Goethe Institut, was cancelled due to the intervention of Fischer’s German opponents. A number of academics convinced the German Foreign Office that is was not in the Federal Republic’s interest to let Fischer present his critical reinterpretation of the German Empire’s role in the outbreak of World War I in the United States. Only the organizational efforts of several American historians (among them Epstein and Stern) enabled Fischer eventually to realize the tour. Later in the same year, Fritz Stern appeared at the convention of the German Historical Association and backed Fischer’s position at a panel discussion on World War I that attracted fifteen hundred listeners. In his magnum opus on the German Empire’s war aims during World War I, Griff nach der Weltmacht, Fischer had challenged the notion of the Third Reich as a Betriebsunfall (accident) in German history, an interpretation many German historians still adhered to.[8] American support for Fischer’s lecture tour and Stern’s widely publicized speech at the Historikertag were crucial for Fischer, who initially had been isolated within Germany. Yet many of the émigrés who intervened in this debate were not uncritical supporters of Fischer’s views. Rather, as they made clear in their letters to German diplomats in the United States, their intervention was motivated primarily by concerns about academic freedom in the Federal Republic.[9]

German and émigré historians could also be in absolute interpretive agreement with one another, as their responses to William Shirer’s simplistic yet immensely successful The Rise and Fall of the Third Reich illustrate. While the reactions of German and American media as well as the general public differed dramatically, the evaluations of historians on both sides of the Atlantic were similarly devastating.[10] Klaus Epstein’s comprehensive assessment in the Review of Politics was as negative as Martin Broszat’s in Historische Zeitschrift, and its tone was even more blunt. Epstein argued that Shirer’s “one-sided misjudgments on Germany’s political history appear[ed] relatively insignificant when compared with his systematic prejudice when dealing with Germany’s cultural heritage,” and accused Shirer of the “rewarming of the wartime tale that German history is a one-way road leading from Luther to Hitler.”[11] George Mosse’s review of Shirer’s study in The Progressive was more moderate in tone, but also quite critical.[12]

The example of Joachim Remak offers further proof that the German notion of the “resentful émigré” was misguided. Primarily an expert on World War I, Remak emerged as Fritz Fischer’s main American critic and proclaimed in 1971 that “Fritz Fischer’s decade has ended.”[13] He believed that Fischer was pushing revisionism too far, and the emphasis on the peculiarities of German history between 1871 and 1945 did not convince him either. Therefore Remak welcomed Geoff Eley’s and David Blackbourn’s attack on the Sonderweg argument as “an annoying book with a valid thesis.”[14]

Finally, émigré historians reviewed each other’s work, and unsurprisingly were not always in agreement. Klemens von Klemperer sharply criticized George L. Mosse’s The Crisis of German Ideology for its “vastly exaggerated” conclusions, especially regarding Wilhelmian Germany that had been forced by Mosse “into a Volkish strait jacket.”[15] Klemperer added, “Just because it is understandable and indeed inevitable that in these days German history should be written with the catastrophe in mind, it is up to the historian to exercise the necessary restraint.”[16] But Klemperer’s criticism should not detract from the fact that Mosse’s book was extremely influential. As Saul Friedländer has indicated, “For those of us who, in the mid-1960s, started teaching modern history, particularly the history of Nazism, Nazi anti-Semitism, and the origins of the Final Solution, The Crisis [of German Ideology] opened new vistas.”[17]

These examples reveal that the postwar belief of some West German historians in an alleged emigrantisches Ressentiment was unfounded. However, this German notion of “émigré resentment” clouding their scholarly work remained until the mid-1960s a popular way to dismiss disagreeable views of German history.

For the period between the end of World War II and the mid-1960s, it is safe to say that the more conservative an émigré was, the more attractive he also was for the postwar West German historical profession. Therefore it was only consequential that Theodor Schieder, who due to his towering significance within the West German historical profession certainly held greater influence on job distributions than any of his colleagues, pointed to Klaus Epstein when asked for the names of promising younger scholars. Epstein, according to Schieder, had not only an “extraordinarily sharp mind,” but also, and more importantly, an “impressive ability to empathize with the German conditions, from which he had been removed through his course of life.“[18] By hiring Epstein, the German historical profession would have been able to signal its openness toward “foreign” perspectives without running the risk of pushing revisionism too far. Schieder’s remark also suggests that not all émigré historians could be trusted to express the same empathy and understanding.

By contrast, it is hard to imagine Fritz Stern or even George Mosse being considered for an appointment at a German history department in the early 1960s. What West Germany’s leading historians thought about Stern became apparent during the Fischer-Kontroverse. In October 1964 the publisher of the journal Geschichte in Wissenschaft und Unterricht (GWU) suggested including Stern’s contribution to the Historikertag, which had supported Fritz Fischer’s position, in a forthcoming issue. GWU’s editor, Karl Dietrich Erdmann responded that Stern’s paper was merely emotional in nature and contained not a single factual argument (“Appell an Emotionen, kein einziges Argument zur Sache”). Eventually, GWU decided not to print Stern’s paper.[19] Complaining to Erdmann about “Mr. Stern’s babble” (“das Geschwätz von Herrn Stern”) at the Historikertag, which had deeply annoyed him, Gerhard Ritter voiced a similar sentiment.[20]

These defensive attitudes among German historians receded after the mid-1960s, owing much to the generational change within the discipline. A younger generation of German scholars (including, for example, Hans-Ulrich Wehler, Volker R. Berghahn, and Jürgen Kocka), born between the late 1920s and early 1940s, was much less likely to distinguish between “German” and “foreign” perspectives on German history, and to dismiss the latter as ultimately unreliable.  Several of them had met émigré historians already during student exchange years in the United States, and subsequently maintained ties to them and to the American historical profession more generally.  The creation of a continuous transatlantic conversation, significantly shaped by second-generation émigrés as intermediaries, in which the national background of the participants became less and less important, unquestionably constitutes an impressive achievement during the postwar decades.

It is of course difficult to provide generalizations about the second-generation émigrés, as they constituted a group of scholars who differed in their research interests as well as in their methodological and political orientations. Nevertheless, second-generation émigré historians supported the interpretive and methodological diversification of the German historical profession, the former most notably during the Fischer-Kontroverse. Perhaps as a result of their immersion in American academia, they did not tend toward the German Schulenbildung (the habit of forming distinct schools). While these émigrés contributed and supported critical perspectives on the recent German past, they never became partisans of any of the West German historiographical camps that faced each other with considerable hostility, especially during the 1970s and 1980s. Ultimately, therefore, the second-generation émigrés helped shape a nuanced interpretation of modern German history, not the “distorted view of reality” Gerhard Ritter and others had feared at the outset.

Philipp Stelzel studied modern European and German history at Ludwig-Maximilians-Universität München, Columbia University (MA), and the University of North Carolina at Chapel Hill (PhD). He has taught at Duke University, Boston College, and has been assistant professor of history at Duquesne University, Pittsburgh since 2014. His first book, History after Hitler: a Transatlantic Enterprise (University of Pennsylvania Press, 2018) analyzes the intellectual exchange between German and American historians of modern Germany from the end of World War II to the 1980s.