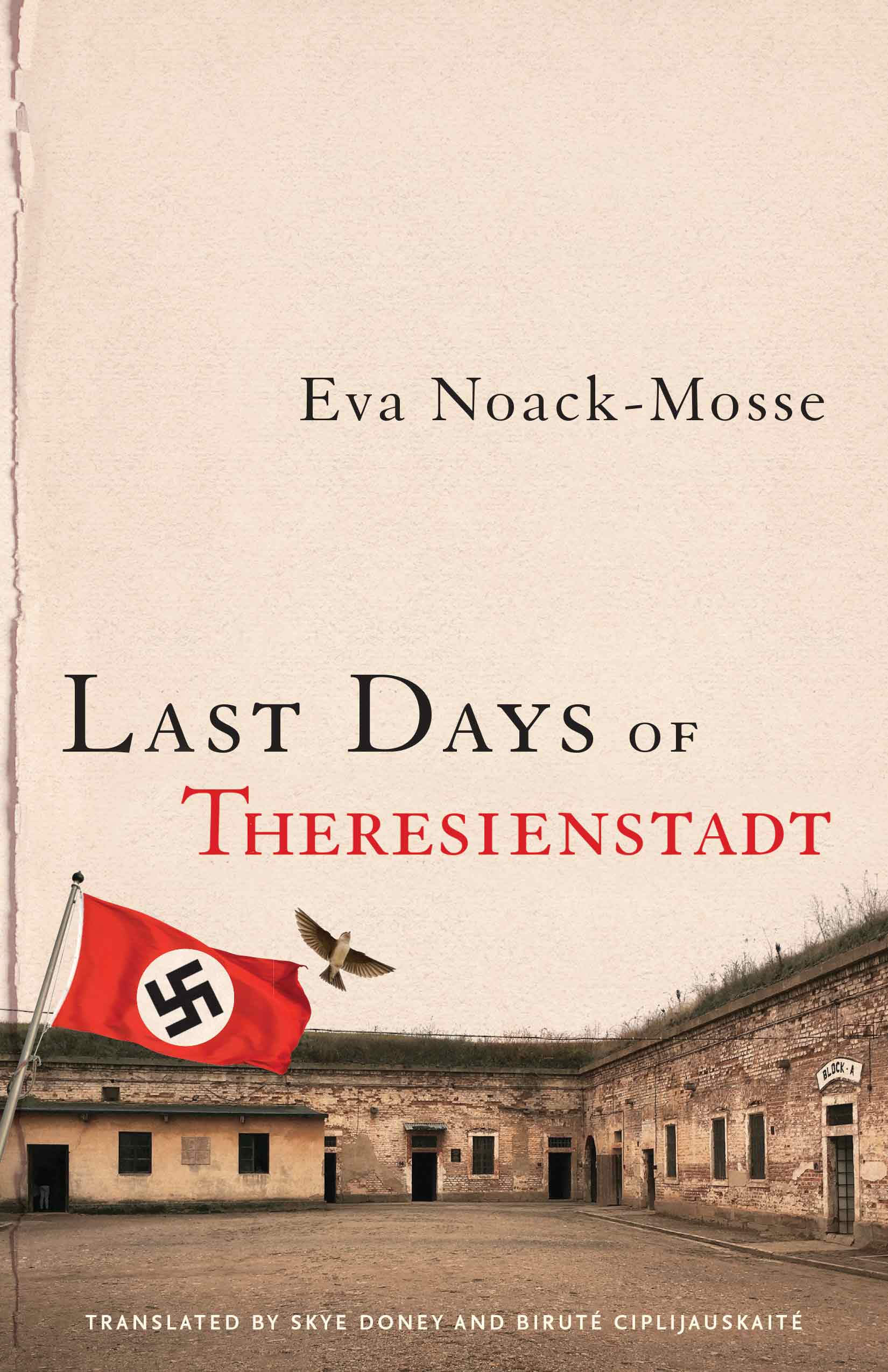 The recent release of Last Days of Theresienstadt posthumously fulfills its author’s long-held wish that her recollections of life inside Theresienstadt would someday reach the widest possible audience. A journalist by training, Eva Noack-Mosse wrote that she hoped her words might stand as one more voice in a chorus revealing the awful truth of Theresienstadt—to “help ensure that what has happened will never happen again.”[1] Her text—translated by Skye Doney and the late Birutė Ciplijauskaitė—arguably does that and more.

Noack-Mosse’s writings, first and foremost, provide a window into the final months of Theresienstadt, covering the end of Nazi rule, the takeover of the International Committee of the Red Cross (ICRC), and the arrival of Soviet occupation forces. Few other eyewitness accounts encompass the entirety of this transitional, concluding period of Theresienstadt. Noack-Mosse’s life as a Jewish woman in a mixed marriage in Germany and then inside Theresienstadt was one of confusing contradictions, precious occasional opportunities, and ever-present threats to her very survival. In her text—part memoir and part diary—she details at length the importance of relationships for survival of Nazi persecution from the time before her deportation to her return home. With this account, scholars of Holocaust Studies, Comparative Literature, and Gender and Women’s Studies, and other interested readers gain new access to evidence on the functioning of Theresienstadt through the eyes of a well-connected, though not exactly “prominent,” Jewish woman.

Alongside Noack-Mosse’s account, this volume’s inclusions of a forward by historian Mark Roseman and an Introduction by George L. Mosse Director Skye Doney further explore the definition of Theresienstadt as a ghetto, camp, and site of Holocaust perpetration. This is in addition to an appendix that details Noack-Mosse’s postwar correspondence with her cousin, the historian George L. Mosse. In these letters, Eva tells “Georgie” that she has penned a “new version” of her diary with “later additions from [her] notes.”[2] By including these revisions from 1945 onward, Noack-Mosse’s work fascinatingly blurs the line between diary and memoir. Doney describes in his Introduction the decision to italicize those parts of the diary that were clearly added later.[3] Roseman’s Foreword also comments on this hybridization and the editorial process of marking Noack-Mosse’s later changes.[4] While the italicized portions of the book are clearly sections added after Noack-Mosse’s return to the safety of her home and family, the reader quickly comes to realize she has done much more editing and revision than is noted.

Whatever Noack-Mosse’s later changes, this book retains the dated entry form of a diary. Each begins with the short, choppy notational sentences common to diaries. Her entries can, however, diverge significantly from this style after the first few sentences. For example, in her account of 23 February, 1945, Noack-Mosse switches mid-entry from the present to the past tense. For the reader, this switch seems to suggest that, by the end of this entry, Noack-Mosse is speaking about her experiences at a distant remove.[5] The first few sentences of each entry, in contrast, are written in the present tense, suggesting that they were written closer to the time of the action.

Far from challenging the veracity of her memories or firsthand witnessing, this expansion and editing of her diary cum memoir is just one of the many important contributions of Noack-Mosse’s account for scholars of Holocaust history and survivor literature. She offers readers a chance to experience both the raw emotion of a first-hand witness and also the calculated observations of a trained journalist. While reading the text, one begins to sense that Noack-Mosse wrote short entries each day in the camp—as might a journalist on her notepad—and then returned to these notations at a later time, filling in more information as she learned it, as though she were in the process of writing a newspaper article. In her entry of 7 April 1945, for instance, Noack-Mosse begins as usual with short notational sentences and later expands into comments on things she could not have known on this date. When she states that the events in this entry took place just a few days before the final withdrawal of SS guards, the reader realizes that Noack-Mosse has expanded upon her thoughts.[6]

In addition to providing a new source with which scholars can analyze diary and memoir forms, Noack-Mosse’s account also contributes to discussions of just what exactly Theresienstadt was as a part of the Nazi machinery and what it was like during its final phases. In its description of “Terezín,” the Encyclopedia of Camps and Ghettos from the United States Holocaust Memorial Museum (USHMM) states that this “ghetto functioned as a reception and transit camp, which has led some witnesses and scholars to classify it as a concentration camp.”[7] Noack-Mosse’s own words, as well as those of Roseman and Doney, continue to delve into the question of whether Theresienstadt was a camp or a ghetto. For the most part, Noack-Mosse calls Theresienstadt a “camp”—sometimes even a concentration camp. At the same time, she also does occasionally use the term “ghetto” with possible connection to events at the time in which she was writing. When she recounts the visit of an ICRC Commission in her entry of 6 April 1945, for example, Noack-Mosse calls Theresienstadt a “ghetto.”[8] Once these visitors are gone, however, she goes back to her much more common use of the term “camp.”[9] Though it is possible that this is just a relic of her editing or an unintentional curiosity of the text, this might well be a reflection of events at the time and a Nazi demand that prisoners put on this appearance and used the term ghetto during the ICRC visit.

Noack-Mosse’s diary and added recollections also provide yet another source to examine the importance of pre-war relationships and social networks for survival during the Holocaust. Fellow one-time Theresienstadt inmate Richard Glazar, for example, insisted in one of his many postwar interviews that relationships were the very building blocks of survival at this and other places during the Holocaust. In Glazar’s view, those who stated that they got by on their own were simply unable to admit how often they had relied upon the help of others.[10] Noack-Mosse’s account of life in Berlin, Bavaria, Theresienstadt, and her final return home is replete with stories of the help she received from others and the continuing power of preexisting social bonds once deported to the camp. Whether it be her stories of help from neighbors in the capital of the Third Reich, the assistance and caring of villagers in her adopted southern village as she received orders to depart for the camp, or her recollections of fellow prisoner family members and acquaintances providing her with help inside Theresienstadt itself, Noack-Mosse’s saga is a confirmation of the power of relationships for both mental and physical survival. She might not have made it home without them, and she knows it.

Cognizant of her own social relations and ever the acute observer of those around her, Noack-Mosse also highlights the different experiences of men and women inside Theresienstadt. In the process, her words add a remarkable source to more recent studies of sex and gender in the Holocaust. “In general,” states Noack-Mosse, “men suffered more, both bodily and spiritually, than did women.”[11] In her view, this was not only due to their greater physical trouble adjusting to starvation rations, but also how the experience of powerlessness and loss of social position weighed on their masculine conceptions of self. Noack-Mosse recalls that a male “lawyer suffered terribly from the fact that he had become a street sweeper, more than a woman, formerly a chemist, who now worked in the laundry.”[12] For men in general, she points out that their change in social position added a layer of personal suffering to which women seemed less susceptible. Historian Mary Louise Roberts coined the term “gender damage” for reference to just such trauma resultant from “the inability to act out expected norms of masculinity in social practice.”[13] Noack-Mosse’s daily observations describe the lived experience of gender damage, while her work in the central administration office of the camp allowed her to document higher male death rates in the later days of Theresienstadt. In this way, her text offers fruitful territory for the analysis of the gendered experiences of suffering and perseverance among prisoners; a vibrant and growing area of research on war and the Holocaust.[14]

As she hoped, Eva Noack-Mosse’s diary and memoir of Theresienstadt’s final months add a strong voice to the chorus of history. Hers is an account that delivers the facts in greater detail and with more elegant prose than her often self-effacing style allowed her to contemplate. The University of Wisconsin Press and the George L. Mosse Program in History should be proud to complete, at long last, Eva’s request to her cousin George that this book reach publication. Her words are a reminder of the best and worst of human nature and the imperative, as she powerfully concludes, that “one should never allow one’s conscience to go to sleep.”[15]

Sereny, Gitta. Into That Darkness: An Examination of Conscience. New York: Vintage Books, 1983.