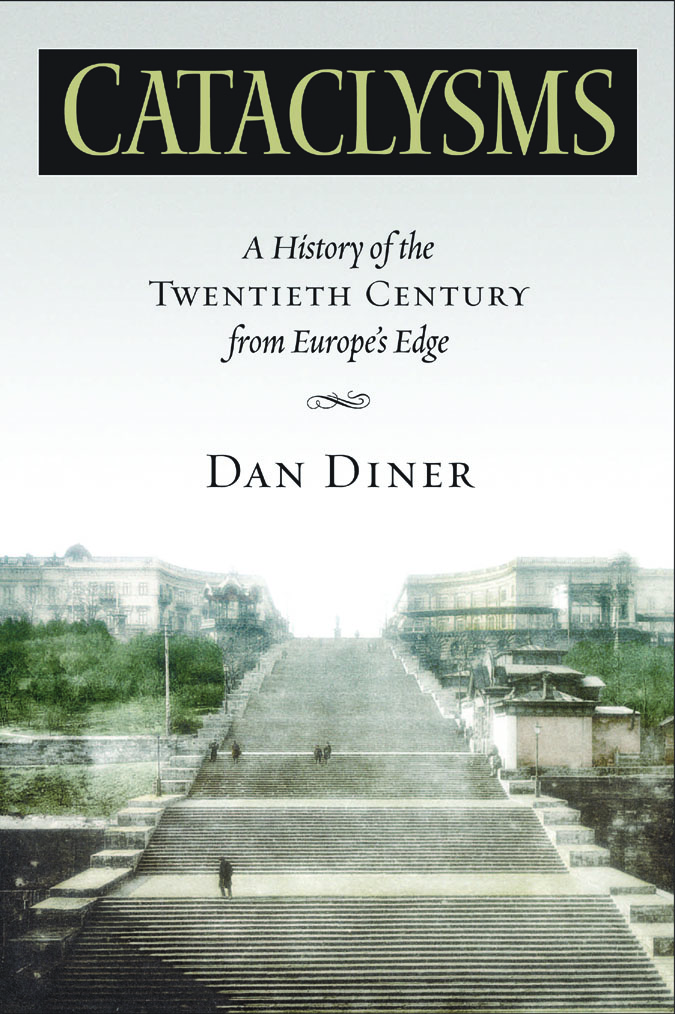 Anyone studying the twentieth century will have little trouble identifying certain key developments: the Russian Revolution; the rise of authoritarian and totalitarian regimes; genocide and Holocaust; the Cold War and decolonization. But from what perspective might we best tell the story of these developments? Precisely this question stands at the heart of a book the renowned historian Dan Diner published in 1999: Das Jahrhundert verstehen [Understanding the Century]. The book was translated into English and published as Cataclysms: A History of the Twentieth Century from Europe’s Edge in 2008.  The George L. Mosse Series in Modern European Cultural and Intellectual History, published by University of Wisconsin Press, adopted Cataclysms as part of its collection.  In this work, Diner narrates the years 1919-1989, looking at the “antagonism between Communism and its opponents” (4), often diving deeper in time to explain the context, excavating the roots of contemporary ethnic and political strife.

The subtitle for the English translation mentions looking at Europe from the edge, which Diner accomplishes by examining the “Eastern Question” throughout his work, moving from the Balkans to Eastern Central Europe (especially Poland) and then to Soviet Russia.  More precisely, Diner travels from East to West in waves, with some chronological overlap, reinforcing the idea that repeated shifts of perspective are key to gaining a fuller understanding of historical events.  He is open to discussion and acknowledges the “open process” (5) of history itself – indirectly conceding that we historians help create the memories that will be discussed fully in the last part of this three-part blog series.  Much of Diner’s focus on perspectives may be rooted in recent trends to branch out of national histories and examine transnational connections and influences. In German and Anglophone scholarship, the trajectory of transnational approaches has led from Arno Mayer and Hugh Seton-Watson to Mark Mazower and Eric Weitz, then to more recent scholarly (and controversial) works by Timothy Snyder – with Diner in the middle of the proverbial parabola.

Apart from the focus on peripheries, the crucial theoretical proposal Diner makes in Cataclysms consists in looking at twentieth-century European history through the lens of a “universal civil war.”  He presents a battle between two seemingly diametrically-opposed political philosophies: liberal democracy and communism.  Diner was inspired to explore this approach after his curiosity was piqued by novelist Ernst Jünger’s use of Weltbürgerkrieg in his diary as the United States entered the Second World War (11-12). Noting that “civil wars are always wars of values” (13), Diner delves into an intellectual exercise in explaining the series of cataclysms in Europe’s 20th century in terms of a civil war.  Diner writes that “the Paris Peace Conference contributed to a continuation of revolutionary tensions and political upheavals,” leading to new catastrophes (15).  This perspective also helps explain why the main period to which Diner gives attention is 1917-1989, the years of communism.  While World War One was not itself an example of a “universal civil war,” the event set the stage and created the conditions which led to strife between binary camps (24ff.).

Diner does not hesitate, however, to address the main anomaly which impedes the “universality” of his civil war framework – Nazi Germany, an aberration so dangerous that it brought a temporary truce between the two antagonists in this civil war.  Diner argues that Nazi anti-Bolshevism differed from Western anti-communism in nature because it was rooted in biology, seeing ethnic Slavs and Jews as inferior (50). He states, “Following Germany’s defeat, the enduring conflict between the liberal West and the communist East returned with an intensity that seemed meant to efface [the] memory of the years 1941 to 1945” (49).

Diner’s second chapter, “Conversions: Nation and Revolution,” embraces the idea of approaching 20th-century European history from the periphery.  The author offers a compelling synopsis of the Eastern European interwar period – often touching on the issue of “othering” and the ways it has fostered political or ethnic antagonism (80ff.).  Diner gives much attention to the Polish-Soviet War, an extraordinary series of events generally excluded from surveys of European history but brought into focus thanks to an adjusted geographic gaze.  Greece, Hungary, and Rumania, all grappling with new or regained autonomy, are also included in this discussion as Diner makes a conscientious effort to address issues of self-determinism, national identity, and “othering” fostered by the Paris Peace Conference.

Chapter Three, “Regimes: Democracy and Dictatorship,” is an excellent analysis of the interwar period.  It centers on the question: “Did things have to work out the way they did [in the 1930-33 power shift]?” (107)  Diner compares Britain, France, and Germany to explain differences in how these states reacted to the political and economic crises of the 1920s and ‘30s.  Of especial interest is his portrayal of Germany as a “special type of dictatorship” as he weighs in on the Sonderweg thesis.  This section of the work places much emphasis on individual political agency to help explain success or failure in sustaining liberal democracy in Western Europe in the 20th century.  Diner argues that Germany’s transformation to a dictatorship was unique, but denies that there was a “special path” (131).  He places much of the blame for Hitler’s rise on the Socialist Democratic Party (SPD), which saw the future Chancellor as less of a threat than other political actors like reactionary Kurt von Schleicher (147).  But for Diner, explaining the rise of Nazi dictatorship also requires taking into account Hitler’s own political machinations and Chancellor Franz von Papen’s back channel help (150-1).  Structural weaknesses of Weimar and particular decisions made by particular individuals thus came together in a fatal mixture producing the Third Reich.  Diner’s comparative-peripheral approach reveals itself as a productive attempt to tell what was inevitable and what was contingent about the ingredients of this mixture.

The second blog post of this series will concentrate on the chapter “Cataclysms.” It will address the gravity of “othering” in the process of ethnic tension, nationalism, and class warfare.  The final installment will focus on my overall reflections on Diner’s work and its significance in the field of modern European history.

Jason M. Wolfe is an Instructor of History and Coordinator of Dual Enrollment at Louisiana State University.  His research has taken him to Germany, South Africa, and Namibia in addition to special collections in the United States. His manuscript, “God’s Children without a Nation: German Missionaries, Settlers, and Africans in Southwest Africa, 1915-1960” examines what is modern-day Namibia through the lens of German evangelists from the Rhenish Missionary Society, specifically their role in shaping cultural, religious, and political developments in what became a League of Nations mandate.