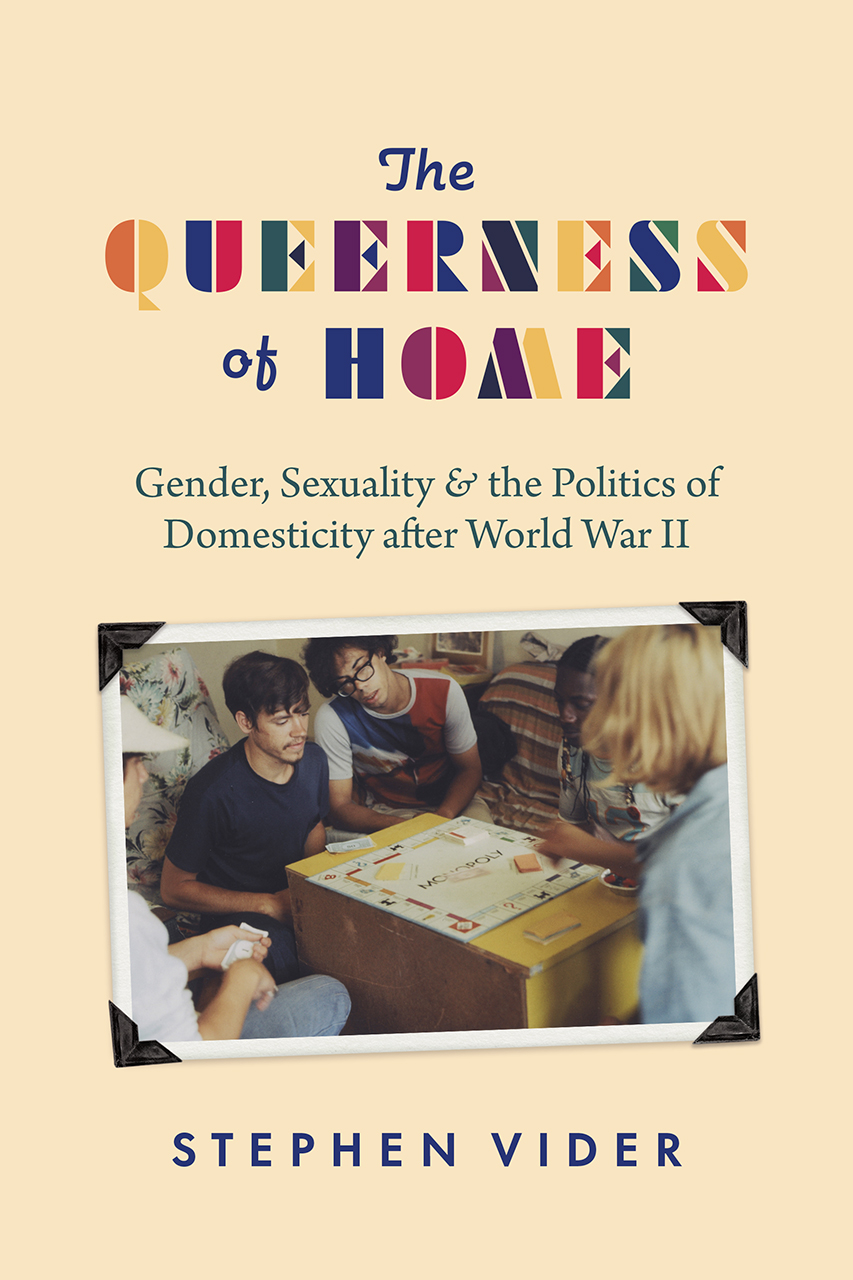 Just about twenty years ago I took my first undergraduate courses in LGBTQ+ Studies. In one of those courses the syllabus included a cartoon drawn by William Haefeli for the New Yorker. The image features two gay men, presumably white and presumably a couple, surrounded by symbols of urbane, stylish, middle-class domesticity. One of the men is seated while the other lounges barefoot, back supported by a throw pillow, feet tucked under the partner with whom he shares the sofa. They sip coffee from cappuccino cups (one rests primly on a saucer) while each reads a section of the weekend newspaper. The somewhat subtle intimacy of the men denotes their queerness but it also connects that queerness to the domestic symbols that surround them: a set of French doors or large casement windows framed by curtains, the trappings of a New York loft, perhaps; a corniced bookshelf capped by a trailing philodendron, suggesting an educated background; a lamp and side table, hinting possibly at a flair for interior decorating; and a small pet dog, perhaps a queer substitute for a child, dutifully sat at the foot of the sofa in the foreground. One of the men is talking on what looks like a cordless phone (this was twenty years ago, after all) and his words provide the cartoon’s caption: “We’re not doing anything for Gay Pride this year. We’re here, we’re queer, we’re used to it.” Taken together, the message of the cartoon seems fairly clear: domestic queerness is not a radical, public queerness, it’s a private, conservative, or even apolitical queerness. These men are comfortable in their domestic queer life, they have no need for the politics of Pride anymore. This divide between radical queer politics and conservative or apolitical queer domesticity was at the heart of much intra-LGBTQ+ debate in the 1990s, particularly around the issue of marriage. That debate shaped many of the political organizations and narratives common in LGBTQ+ politics today and also helped shape the emergence of queer theory in academia. No matter the setting, the crux of the matter in the 1990s, as spelled out in the New Yorker cartoon, was what the proper role was, if any, of domesticity in queer life.

In his book, The Queerness of Home: Gender, Sexuality, and the Politics of Domesticity after World War II, Stephen Vider seeks to return to the question of domesticity’s place in queer history not by resurrecting the Manichean debates of the 1990s but by recovering the queerness of domesticity that both sides of those earlier arguments missed. He argues that one of the key points passed over by early scholars was that domesticity and its associated values are not one thing or the other, but simultaneously a site of constraint and agency, of heteronormativity and queer possibility. For Vider, the fluidity of domesticity underscores its status as a performance of cultural citizenship, the enactment of a material, lived reality that shapes one’s relationship to family, neighbors, and the state. Contrary to earlier, rigid understandings of this dynamic, Vider’s key contribution is to foreground how flexible, how easily flipped and manipulated the performative script of domesticity has historically been for queer individuals and activists. Vider’s goal then is to trace how queer individuals and activists have leveraged what he calls the “perversity of home,” the fluid and malleable nature of the domestic script, to alter the meaning of domesticity and what it could it could offer to queer folks.

Vider structures his book chronologically and divides it into three sections: Integration, Revolution, and Reform. He uses this structure to highlight the underlying goals of individuals and activists as they mobilize domesticity before, during, and after the rise of radical Gay Liberation politics of the late 1960s and 1970s. Prior to that period, he argues in the first section, queer folks leveraged scripts of domesticity to both shield themselves from the prying and punitive eyes of the state and, at the same time, integrated themselves into the wider culture of the 1950s and early 1960s mainstream. That broader culture viewed homosexuals largely as sexual deviants, criminals, and – through the lens of postwar psychology – mentally maladjusted individuals. Same-sex marriage, according to homophile activists who pushed for queer couples to perform and live in monogamous extra-legal unions, was intended to counter that perspective, and demonstrate that queer folks (at least the married ones) were mentally and romantically well-adjusted individuals. While homophile activists wanted to make these unions public and visible to the straight world, for many individuals marriage was a path to privacy and protection from the state. The homophile push for same-sex marriage fizzled out in part because most queer folks sought to keep their home lives private. By the mid-1960s, new opportunities for public representations of queerness arose as the counterculture began to ramp up, obscenity laws began to fall, and – with the help of Susan Sontag (1933-2004) – the style and performance of camp became a popular and profitable way of integrating queerness into straight society. Vider traces this phenomenon through the surprising popularity of gay cookbooks of the 1960s, which he argues put queer domesticity on display for both gay and straight audiences. For straight audiences, these cookbooks challenged stereotypes of maladjusted (mostly white, male) homosexuals and, for gay audiences, they presented the home as a site of queer domestic consumption that could facilitate integration into mainstream culture.

By the late 1960s and with the rise of gay liberation politics in the 1970s, shopping one’s way into the mainstream, especially if it meant embodying effeminate stereotypes of gay men so popular in mainstream representations of camp, had fallen far out of favor for queer folks. Rather than integration, the activists and individuals Vider examines in the second section of his book attempted to use domesticity to imagine, build, and live something new, something revolutionary, and also radically queer. In this section Vider showcases two examples of queer activists and individuals rejecting the mainstream culture and the power of the state through domestic practices: queer communes and lesbian-feminist architecture.

Queer communes, Vider argues, adopted the perspective of radical feminists and other social movement activists who looked to communal living as a rejection of normative modes of being. For Vider, queer communes offered an alternative mode of domesticity that rejected traditional gender roles and notions of proper sexuality as well as “bourgeois” forms of gay male domesticity offered by cookbooks and other consumer-oriented and assimilationist practices. Likewise, in looking at the life and work of architect Phyllis Birkby (1932-1994), Vider explores how women and lesbian-feminists sought to expose the patriarchal underpinnings of architecture and imagine what a woman and/or lesbian-centered architecture and built environment might look like. Birkby and others attacked patriarchal architecture that “atomized” and separated women in private domestic spaces. Using consciousness raising groups, Birkby and others leveraged the medium of fantasy to imagine what women desired in the built environment and what an architecture centered on those desires might look like. The resulting designs emphasized community over individuality; leisure, study, and community-building over profit-oriented work; and female-only spaces over male-oriented ones. While Birkby was limited in her ability to see many of her own designs to completion, several were built, and Vider argues that these realized designs, as well as those that remained only ideas, were part of “performative intervention” that sought to translate the theories of lesbian feminism into built reality.

As the 1970s gave way to the 1980s, the radical, revolutionary, and anti-state politics of gay liberation and lesbian feminism began to fade in favor of a politics that, instead of rejecting the state, sought its embrace in the form of legal rights and protections. As in previous decades, for queer activists and individuals, this shift in politics included a parallel change in how the domestic script was mobilized. In this third and final section of Vider’s book, he examines how activists and individuals involved in the LGBTQ shelter movement and in AIDS homecare services embodied this shift. In his examination of LGBTQ shelters, like the Los Angeles Liberation House, Vider traces how early iterations of shelter activism embraced more radical understandings of shelters as spaces where residents could imagine alternatives to middle-class, heteronormative forms of domesticity. This changed as LGBTQ shelters and foster care programs began to ally themselves more closely with state and federal government entities and their funding streams. Those more radical notions began to be replaced with a sense that the role of the LGBTQ shelter or foster care program was to prepare residents for independent and productive lives in a heteronormative world. In a similar way, Vider examines the role of domesticity in AIDS homecare services and activism. For Vider, homecare services like the Gay Men’s Health Center Buddy Program borrowed from earlier activists to imagine how alternative, chosen families and networks of support could be built for people living with AIDS. At the same time, Vider argues, these programs and the actions of other AIDS activists used domesticity as a way to elicit understanding, empathy, and support from straight audiences and state entities. While not a full rejection of the radical forms of domesticity imagined by earlier queer activists, the 1970s and 1980s saw a tempering of that imagination as activism became more closely allied with the state.

Vider’s study, in addition to rethinking in really profound ways the relationship between domesticity and the queer past, also feels extremely timely. Once settled fights over gay marriage and sodomy laws, for instance, have reemerged as political issues following the Supreme Court’s overturning of Roe v. Wade. Likewise, the brief but alarming eruption of the monkeypox virus among men who have sex with men and the state’s lethargic and moralizing response raised specters for many of the worst years of the HIV-AIDS crisis. And fights over transgender rights (especially for youth), drag shows, and comprehensive sex education and support all underscore an escalation of old culture wars around queerness, culture wars that were and are underwritten by heteronormative understandings of family and domesticity. At a time when the cultural and political winds are quickly and unpredictably changing, Vider offers all of us an important caution not to dismiss the power of domesticity and the usefulness of leveraging the domestic script to whatever ends the moment may require.

To revisit Haefeli’s New Yorker cartoon, the queer domestic scene panned as apolitical laziness in the 1990s might instead be read as one possible mobilization of the domestic script among many today. Based on Vider’s analysis, to reify the domestic is perhaps the truly apolitical and lazy approach. Vider leaves us with an important and timely lesson by showing how the domestic script is indeed a script and one that can be deployed as needed by queer activists. 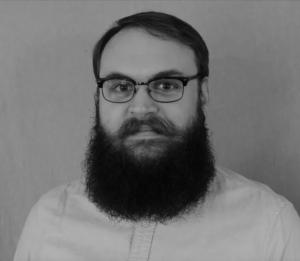 Christopher Hommerding is an independent historian. He received his PhD in U.S. history from the University of Wisconsin-Madison in 2017. His personal research focuses on the history of queerness in the built and natural environments, with a particular focus on rural Midwestern spaces. He recently held a research fellowship in public history at the Minnesota Historical Society and currently works as an architectural historian at a private consulting firm.