Locked in a 10×10 cubicle in the basement of an office building, a zombie on a chain chased me while my friends solved puzzles to get us out.

When we escaped with seven seconds to spare, I knew what I wanted to do with my life.

The game was Trapped in a Room with a Zombie, one of the earliest escape rooms in the United States. Like many escape rooms, your team of four to eight friends gets “locked” in a room and has to solve puzzles in order to “earn your escape” (safety note: you’re never actually locked in). This game provided an added twist in a chained-up zombie who can tag you out of the game.

Most of the puzzles were broken. There was no story to speak of, no understanding of how we got locked in a lab, why we needed to solve puzzles in order to escape, or perhaps most troublingly, what happened to turn this man into a zombie. It was fun, but it was also nonsense. I thought that’s where a degree in history could really come into play.

Escape rooms feed our fundamental desire to be nosy. In an escape room, you can touch everything, open drawers, manipulate objects, give dragons their eggs back, or bribe the pirates to set sail to the forbidden island. The constant wave of new discoveries — secret doors revealed, treasures unlocked — leads to a phenomenal adrenaline rush that has made escape rooms one of the fastest-growing entertainment genres across the globe.

It makes sense I would fall in love with escape rooms; I have always been nosy. How do other people live? I want to know. Being nosy is what drew me to the theatre as a young girl: I wanted to know what it was like to be someone else. Being nosy is also what drew me to history, a discipline part-empathy, part-imagination. How did other people live and think and dream? I often fell in love with the subjects of my papers.

In Spring of 2010, I left UW Madison with my master’s degree in European Enlightenment Intellectual History (yes, I still like to claim all of my descriptors). I started out with hopes of a PhD, with an ivory-tower career in inspiring minds with how different ideas were in the past. But while in school, I could not shake my first love: the theatre.

Instead of perfecting my French, I played a nun in The Sound of Music; instead of digging into Derrida, I stayed up late Skyping with my fiancé about what would happen to Shakespeare’s commentary on love if he turned the character of Audrey into a mop in his production of As You Like It.

My advisors knew theatre spelled trouble. And I knew there was no possible career in it.

In the spring of 2017, my now-husband J. Cameron Cooper and I opened our first escape room, Strange Bird Immersive’s The Man From Beyond: Houdini Séance Escape Room. Unlike most escape rooms, ours delivers an immersive theatre experience, using live actors to breathe humanity into the game.

Players arrive to attend Madame Daphne’s famous Houdini séance. She has inherited a collection of Houdini artifacts, from handcuffs to the mantel that resided in his Harlem home. All of these objects increase her connection with Houdini’s spirit, Madame Daphne claims. When the séance takes an unexpected turn that surprises even Daphne, the players must work to free the Ghost of Houdini from his purgatory prison.

When we first started designing our escape room, I was hardly a Houdini fan. We began our design process by asking the most important question: why are there puzzles? If we take the generic conventions of an escape room as a truth, then every puzzle has an author, which means there is a human, or at least a character, behind the scenes. As players progress through the puzzles, they should learn more about this character.

When debating what sort of crazy human would create puzzles, both a ghost and a magician came up in discussion. Then one of us said, “How about a magician ghost?” We laughed. Upon further reflection, Cameron recalled the story of how Harry Houdini promised his wife, Bess, he would contact her from the beyond the grave. But he never did. Cameron said, “And I always thought that was sad.”

As a student of history, I know you never turn down a good story staring you in the face.

I immersed myself in all things Houdini, studying objects sold at auction, learning the secrets behind his illusions, watching his films, reading his copious letters to his wife. When I sat down to design an epistolary puzzle, I lifted whole phrases from his letters, and when he didn’t give me the words, I copied his impish wit, even his emphatic underlining habit. When I read about the mentalism act between Harry and Bess, I was staring at a puzzle pre-designed for us. And then I discovered the recording of the 1936 Final Houdini Séance. Bess concluded, “Houdini did not come through. My last hope is gone. I don’t think he can come back to me or to anyone.” I had the opportunity to give that moment in history life again, and so we hear Bess give up, four times every Saturday.

While Madame Daphne’s séance takes place in the modern day, everything from Houdini’s era we built with historic materials. Phillips head screws were not common until after World War II, so slotted screws fasten our antique-replicas. That may be the sort of detail no player is ever conscious of, but I believe that subconsciously, they can tell when things feel real.

A player once told me, “This room has a soul.” Our strong grounding in history, in what was true of the time and true of the people, gives it the velvet weight of reality.

As to the narrative, research provided an added twist. While we set out to tell a simple ghostly love story, we ended up with a layered tale about the truth value of séances. In life, Houdini battled against spiritualism, unmasking mediums as frauds profiting off the newly-grieving from World War I. He was unrelenting in his crusade, performing mediums’ tricks with the lights on to enlighten his audiences. The intellectual historian in me would argue he single-handedly stopped spiritualism from becoming another religion. You might imagine, then, in death, Houdini might be less-than-pleased to find himself awakened by our modern-day fraud, Madame Daphne. The Man From Beyond does not fail to capitalize on this irony.

While Houdini is the show’s hero, we don’t let him off the hook. Historians debate as to what precisely killed Houdini, some even claiming a conspiracy of spiritualists did him in, but The Man From Beyond lays the blame at his feet. Houdini died of peritonitis, from a ruptured appendix, but the infection would not have spread if he had gone to the hospital. He stubbornly kept his contracts, traveling and performing with a 104-degree fever before he finally realized the show couldn’t go on. We make the Ghost of Houdini admit he was a fool. It is my hope that players witness this tale of history and perhaps take their own health a bit more seriously.

But building a historically rich game was not enough. We needed to get people in the door. To help with publicity, I started a blog I call (rather cheekily) Immersology—the theory behind immersive entertainment. With every show, I learn how to engage audiences better, and by discovering what works in practice, I develop the theory as to why it works. Articles range from how to structure for narrative inside the chaos of an escape room to adapting Meisner’s acting technique to keep audiences from feeling self-conscious. Immersive entertainment, where the audience plays an active part, is a new frontier, and it made sense to share my discoveries to help push that frontier forward for creators everywhere. I also hoped, of course, to bring attention to the intricate game we’d created.

It worked. Immersology inspired Room Escape Artist, advocates for the industry, to come play, and their patronage brought us players to the point that we are selling out, week after week, and continually expanding our pool of actors. For the last three years, the Top Escape Rooms Project Enthusiast Choice Awards has ranked The Man From Beyond the number one escape room in North America.

Now I’m speaking at conferences, writing articles on theory, leading undergraduate and graduate workshops, getting citations in academic papers—but not at all in the way I expected.[1]

Instead, our next story, Lucidity, will be about a lonely neuroscientist, many years into her postdoctoral work, toiling away on what she hopes may change the world. But her experiment in lucid dreaming goes awry, and players enter her own troubled dream.

Naturally, players must solve a rather exacting grant application puzzle. I hope it inspires empathy. 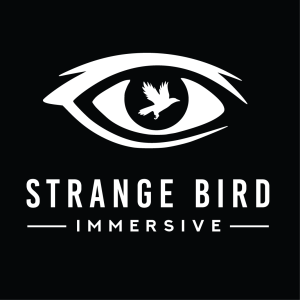 Haley E. R. Cooper received the George L. Mosse WDGF Fellowship and earned her Master’s Degree in History at the University of Wisconsin-Madison in 2010. She is co-artistic director of Strange Bird Immersive in Houston, Texas and author of the blog, immersology.com.