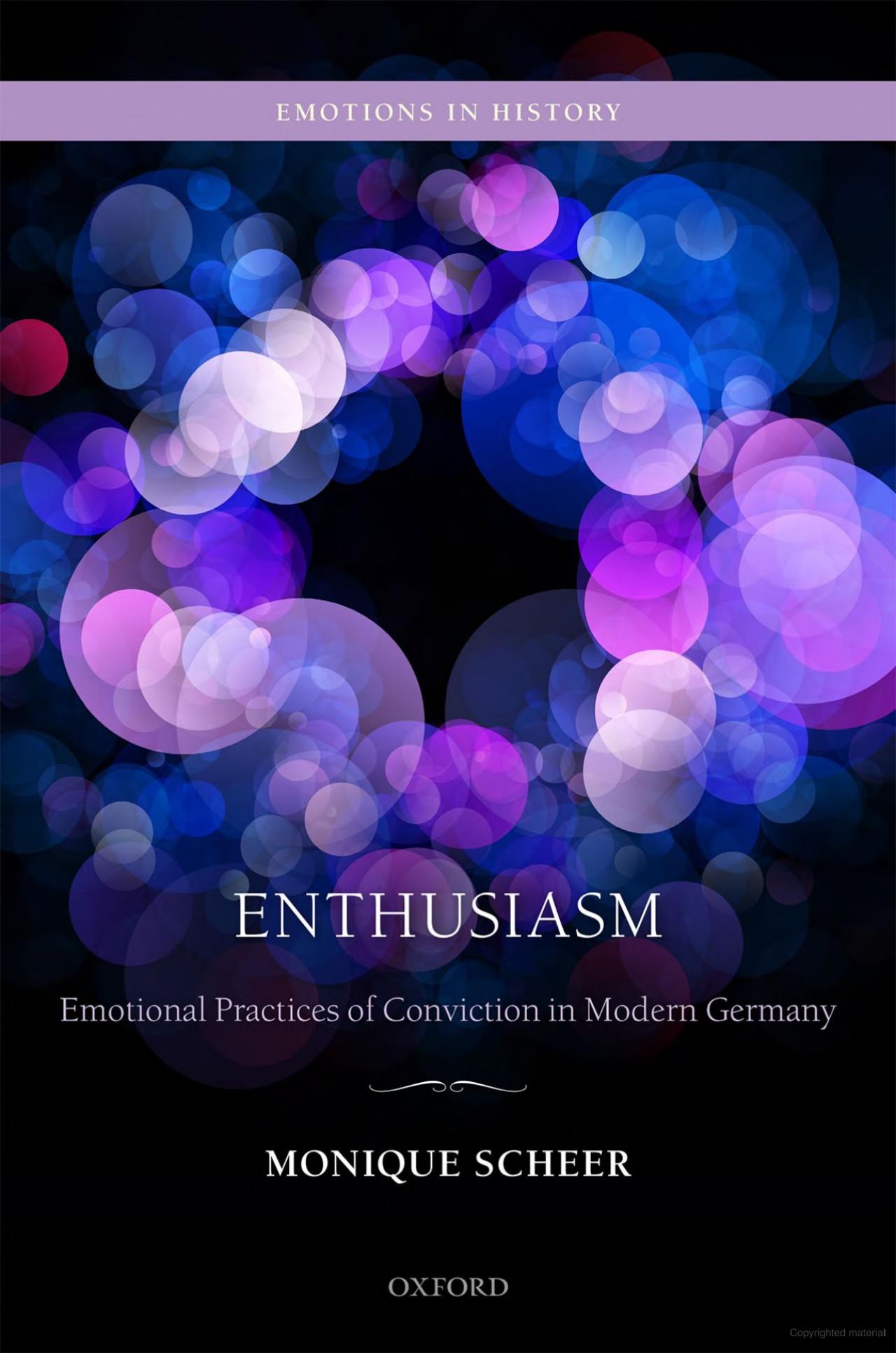 Over the past decade Monique Scheer has been at the forefront of applying the widespread ‘emotional turn’ in the humanities and social sciences to the study of religion in Germany.[1] Her 2020 ground-breaking book on the nuanced emotional practices of German Protestants combines a compelling theoretical framework with historical empiricism and ethnographic fieldwork. The book focuses on two time periods in Germany—the late nineteenth century and early twenty-first century, both characterized by an influx of new religious options in Germany, many of them from abroad (the proliferation of Anglo-American ‘sects’ in the Kaiserreich and evangelical mega-churches and secular humanist groups after the turn of the last millennium).

Rooted in practice theory, Scheer understands emotion as a kind of cultural practice that involves both the body and the mind (201). Emotions are things we ‘do’ rather than ‘have’ and are shaped by context and repetition rather than being universal. Emotion has always been especially important in Protestant spirituality, given the Protestant Reformers’ rejection of Catholicism’s many mediators between God and the individual soul—the sacraments, the saints, the rosaries, and the candles. The Protestant notion of universal priesthood meant that people could have direct access to God. But without the ‘smells and bells’ or other media to facilitate connection, emotion has been used as a vehicle for that contact with the divine (6). Put another way, Scheer argues that emotion is “a central mediating practice for making God ‘real’ to Protestant practitioners” (16).

Understood in this way, emotions are central across the spectrum of Protestant practice and Scheer rejects any simple binary that characterizes liberal Protestant spaces as devoid of emotion and charismatic churches as in excess of it. A thorough analysis must look beyond the quietly bowed heads in the former and the animated raised arms in the latter. The question then centers on how Protestants think emotions ought to serve as a medium for religious experience (75). What are the proper and improper emotional expressions and experiences? How do we understand the conflicts over emotional ‘coldness’ or ‘excess’ or ‘sentimentalism’ between Protestant communities?

The main subject of this study is the emotional practice of religious ‘enthusiasm’, a concept whose meaning has shifted over time. Seventeenth-century English speakers adapted the ancient Greek word “entheos,” meaning “filled with a god,” and used enthusiasm as a pejorative term for radical religious movements. This use of the term emphasized the connection between religious belief and strong emotions expressed through the body. Anabaptists were labelled enthusiasts or Schwärmerei in their time, as were Quakers, Shakers, Pietists, Moravians, Methodists, and the Salvation Army in the eighteenth and nineteenth centuries. In modern usage, enthusiasm has come to include other kinds of passions and commitments, such as “travel enthusiasts” or “sport enthusiasts.” But enthusiasm can hover on the border with fanaticism, claims to absolute certainly, upturning the social order, or even madness and is thus subject to skepticism or repulsion. Scheer offers a more neutral definition of enthusiasm that she employs throughout the study: the mediation of conviction through emotional practice (201).

After an introduction that situates the reader in the theory and vocabulary of the history of emotions and the study of enthusiasm, the book is structured into five chapters. Chapter 1 showcases the author’s commitment to the cultural specificity and genealogy of emotional terminology by examining them in German-language encyclopedias over time. Key to her overall explanation of Protestant emotional practices is her argument that there are two dominant and intertwined strands of emotion theory in Germany in the modern period, the ‘Enlightened’ and the ‘Romantic’ (32). Scheer traces the meanings of mood, passion, and sentiment and notions of ‘inner’ and ‘outer’ domains of the self.

Chapters 2, 3, and 4 delve into various practices of embodying conviction. So what do we learn about Protestants’ emotional practice and their critique of enthusiasm? In the late nineteenth-century, mainline Protestants’ critique of the so-called ‘sects’ focused on inappropriate emotional display.[2] But they weren’t rejecting emotional expression because of a supposed rational, Enlightened modality. Rather, Protestants from the established churches had adopted an understanding of a purely spiritual internal space within the self, where encounters with the divine took place. The result was what Scheer calls “an interiorized enthusiasm.” The role of church music and liturgy was to facilitate religious feelings that were generated from within the person rather than being externally stimulated (90). Emotion might manifest in subtle ways—in one’s posture or facial expression—but would be the result of ‘deep’ feelings. These deep feelings could be cultivated over time through ritual, justifying the regular practice of communal church services.

In this context, it is easier to understand how Protestants’ criticisms of boisterous worship in evangelical settings were not merely a matter of taste but were understood to be inauthentic and manipulative on account of the external stimuli in the form of loud music, clapping, shouting, weeping, and generally chaotic mood. Indeed, many complaints about the early Salvation Army in Germany was that its spirituality was too shallow and too focused on creating a spectacle to attract converts without sufficient Christian teaching or formation. There is an element of self-deception in the German term Schwärmer—the religious enthusiast is misguided about the source of their divine inspiration as a result of manipulative external sensations. Indeed, in my own work on the Salvation Army in Germany I found that the most common complaint about the fledgling movement in this period was that it was loud and caused public disturbances. While I find Scheer’s explanation about Protestant interiority as the source of conflict utterly convincing, I would also add to it a bourgeois distaste for the working classes and concerns over industrial urbanization.

Chapters 3 and 4 combine source material from the late nineteenth-century with ethnographic material on twenty-first century attendees of a typical German Protestant church and an evangelical-charismatic church influenced by American megachurches. Scheer is interested in how people decide if their emotions are ‘real’ or ‘genuine’ and to what extent emotions can count as evidence of one’s religious convictions. In a nutshell, ‘depth’ indicates genuine emotion for mainline Protestants, whereas ‘intensity’ does it for charismatics. When viewed by the other, mainline Protestants appear to be ‘going through the motions’ and charismatics are seen as sentimental and shallow.

The final chapter ventures outside Christianity to explore the emotional practices of contemporary secular humanists to create communities that can serve as church alternatives. Interestingly, these too have been Anglo-American implants in Germany but unlike the various Christian groups, they have not taken root, for reasons that will undoubtedly be explored by researchers in the coming years. Using the same discursive analysis and fieldwork employed with the German Protestant groups, Scheer’s observations about communal life among secular humanists are innovative and insightful. First and foremost is the profound impact of Christianity on how Germans (and beyond) link emotion and conviction. There is a good reason why TED talks may remind you of evangelical preaching in their extemporaneous yet highly-rehearsed oratorical style and the speaker’s passionate and personal efforts to connect with the audience. Yet Scheer titles this chapter “Awkward Enthusiasts” and it appears that some elements of the communal gatherings did not translate to the secular setting, including standing during communal singing and the passing of a collection plate. For some, any sort of ritual evoked religious connotations and was thus rejected. In keeping with practice theory, Scheer suggests that lack of practice on the part of secular folks also explains why these groups did not take off.

In a 2010 forum on the history of emotions in the journal German History, Alon Confino observed that serious engagement of emotions has come late to historical studies because, “[t]he topic is slippery, the interpretative rewards are not immediately obvious.”[3] Yet for historians who recognize that emotions are products of their cultural environments, it is possible to analyze this relationship between culture and the body.[4] Confino is ultimately positive about the possible benefits of a history of emotions approach. A decade later, the appearance of Monique Scheer’s study of religious enthusiasm is one of the best examples of the maturation of this field.

[1] Pascal Eitler, Bettina Hitzer, and Monique Scheer, eds. “Special Issue: Feeling and Faith—Religious Emotions in German History,” German History 32, no. 3 (2014).
[2] Scheer uses the term “mainline Protestants” as a shorthand to refer to adherents of the main Protestant churches in Germany, made up of Lutheran, Reformed, and United churches. Until 1945, the collection of regional church bodies fell under the Deutsche Evangelische Kirche (DEK) and was renamed the Evangelische Kirche in Deutschland (EKD) after the end of World War II. Scheer acknowledges that the term “mainline Protestants” comes from the American context and is not a perfect cognate.
[3] Frank Biess, Alon Confino, Ute Frevert, Uffa Jensen, Lyndal Roper, and Daniela Saxer, “Forum – History of Emotions,” German History 28, no. 1 (2010): 67-80, 70.
[4] Katie Barclay, “State of the Field: The History of Emotions,” History: The Journal of the Historical Association 106, no. 371 (2021): 456-466, 458. 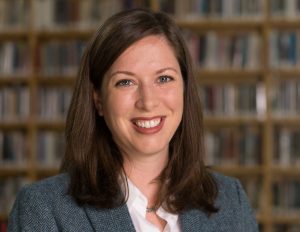 Rebecca Carter-Chand is Director of the Programs on Ethics, Religion, and the Holocaust in the Jack, Joseph and Morton Mandel Center for Advanced Holocaust Studies at the United States Holocaust Memorial Museum. She is the co-editor with Kevin Spicer of, Religion, Ethnonationalism, and Antisemitism in the Era of the Two World Wars (McGill-Queen’s University Press, 2022). Other publications include, “A Relationship of Convenience or Conviction?: The International Salvation Army and the German Heilsarmee in the Nazi Era,” Kirchliche Zeitgeschichte 33, no. 2 (2020): 323-335; and a forthcoming article on the early Salvation Army’s response to war and pacifism. She is currently completing a book manuscript on the Salvation Army and German belonging and identity.

Rebecca serves on the editorial boards of Contemporary Church History Quarterly and the journal Kirchliche Zeitgeschichte. She received her PhD in History and the Collaborative Program in Jewish Studies at the University of Toronto in 2016.