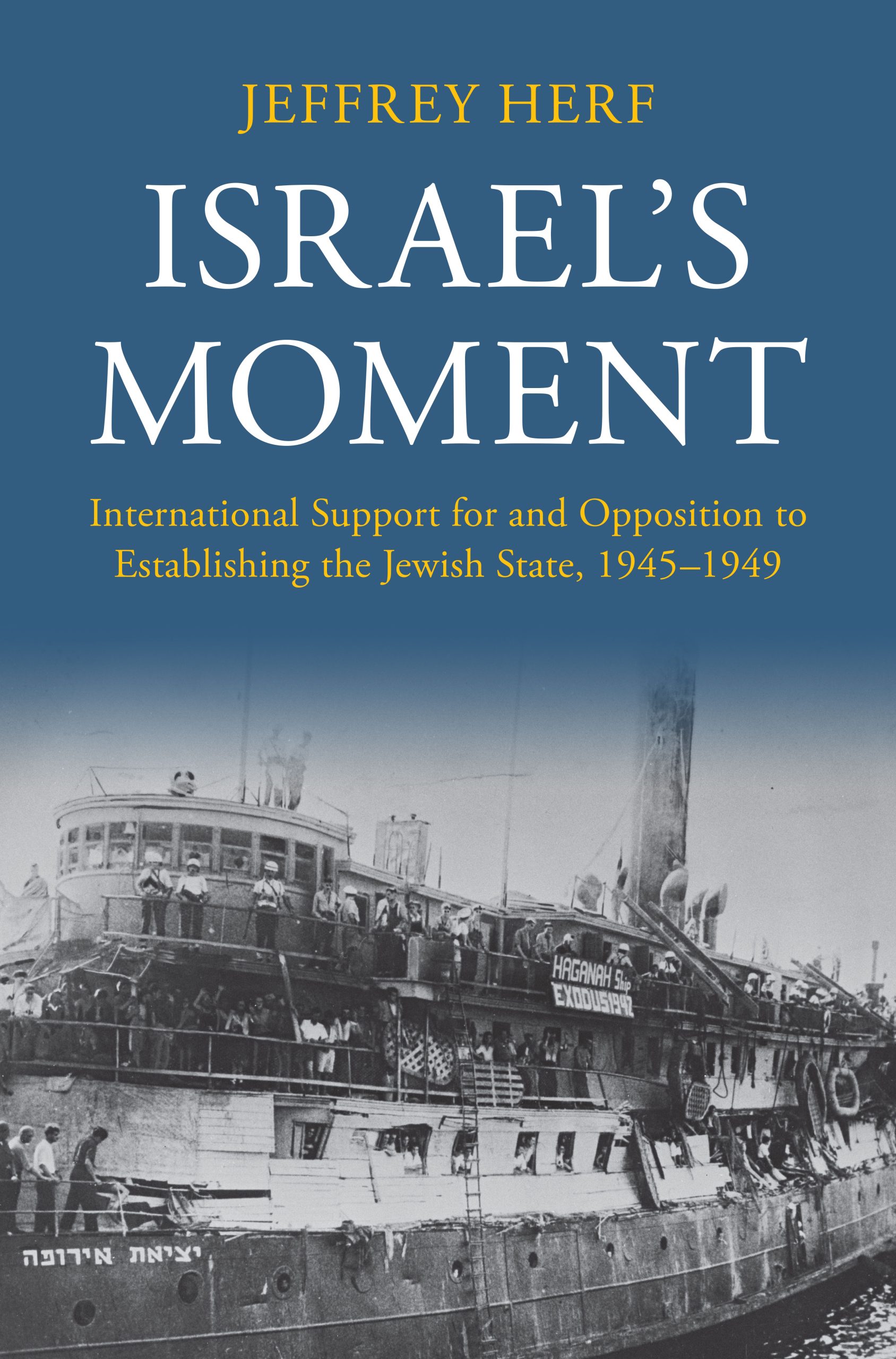 Jeffrey Herf’s Israel’s Moment: International Support for and Opposition to Establishing the Jewish State, 1945-1949 is a welcome addition to an impressive career-long investigation by the American historian of questions regarding the political and intellectual history of the twentieth century, as well as the memory of World War II, the Holocaust, and their aftermaths, in Europe and beyond. In his new book, Herf seeks to understand “Israel’s Moment,” which he defines as the two-year period between May 1947 and May 1949 in which the Zionist project of establishing a Jewish state in Palestine gained crucial international support. For a brief moment, the two most prominent superpowers of the time, the United States and the Soviet Union —wartime allies turned bitter enemies — supported the Zionist movement’s quest for Jewish political sovereignty in Palestine.

Herf suggests, convincingly so, that a deeper examination of this moment of rare agreement between both sides during the early stages of the Cold War is very much needed. This was the brief period in which the question of Palestine was “internationalized,” transforming from a regional political issue concerning mainly the British, regional Arab populations, and the Jews into an issue debated in the United Nations in front of an international audience. Furthermore, Herf argues that this was a point in time in which various circles in the intellectual, political, and diplomatic elite from both sides of the Iron Curtain had not yet entirely abandoned the sentiments and passions of the Second World War for the geopolitical realities of the Cold War. He explains that without understanding the lasting emotions of the time of the War, in both the West and the East, regarding anti-Nazism, antifascism, and anticommunism, we cannot understand this short, influential moment of the “interregnum” before the onset of the Cold War, and how it contributed to the international consensus on the need to establish a Jewish state in Palestine.

This lengthy volume takes us on a journey through intellectual, political, and diplomatic debates in the United States Department of State, the French Ministry of Foreign Affairs, and the halls of the United Nations, as well as to a rich exploration of public debates on the pages of left-leaning political journals at the time such as The Nation and The New Post. Herf is chiefly concerned with three major, distinct groups and spheres of activities: advocacy for Zionism by American liberals and left-liberals in the public sphere, America’s foreign policy and national security elite decision-making process towards the question of Palestine, and the Soviet bloc’s attitude towards the question of establishing a Jewish state.

Herf outlines the background for why American liberals and left-liberals supported the Zionist project, which might be surprising for a contemporary reader. He argues that this support was fueled by continued passions against Nazism and Fascism. Establishing a Jewish state, as Herf explains, was broadly understood as the logical outcome of left-leaning individuals’ and organizations’ prior fierce resistance to the Nazi regime. They saw it as part of the movements against racism and imperialism.

At the same time, Herf shows the profound opposition to establishing a Jewish state in Palestine by officials in the American government. He reveals that it was much more deeply rooted than earlier assumptions have shown. While it was previously argued that the opposition was mainly from State Department officials, who held pro-Arab stances regarding American interests in the region, Herf details the opposition to Zionism as a position held by most of the American foreign policy and national security elite at the time, coming to its peak in the American embargo on selling arms to the warring sides in 1948. He explains that the close relationship and alliance between Israel and the United States in later years, from 1967 until now, obscures how much the American government stood in the way of establishing the Jewish state, supported primarily by then-President Harry Truman.

In the Soviet bloc, Herf examines the complicated political attitude towards the Zionist project. Politically, it’s clear that the Soviet Union backed the Zionist aspirations in order to remove British influence in the Middle East. As Herf shows, the Soviets quickly moved from supporting the establishment of a Jewish state to fierce opposition to Zionism, as it became clear the newly established Israel wouldn’t become a bastion for communism in the Middle East. However, Herf argues that geopolitical considerations were not the only motive for the Soviet bloc’s support for establishing a Jewish state, and wishes to add another layer to our understanding of Soviet decision-making at the time. For example, he brings to the reader’s attention the words of Poland’s representative to the United Nations, Dr. Alfred Fiderkiewicz (1886-1972), who recalled his experience as a survivor of the Auschwitz concentration camp and called for the establishment of a Jewish state as an answer to the horrors of the Holocaust.

Many of Herf’s previous works are dedicated to exploring the history of Holocaust memory during the Cold War, both in the West and the East. Unsurprisingly, he uses his expertise to weave the early history of Holocaust memory into the broader political discussions at the time. Herf devotes large sections of the book to analyzing how the events of the Holocaust and its recent memory were politically used, neglected, or downright ignored in the international political arena in the time leading to Israel’s establishment. For example, large sections of the book are dedicated to a discussion on the attempts by Jewish, Zionist, and pro-Zionist advocates to indict the Mufti of Jerusalem, Haj Amin al-Husseini (d. 1974), for war crimes. Haj Amin al-Husseini infamously collaborated with the Nazis during the war. Herf also examines how the French government, who held al-Husseini prisoner for a short period of time after the war before he escaped to Egypt, were reluctant to extradite him to Britain so as not to harm French relations with Arab countries. Geopolitical rather than moral considerations took center stage. Herf considers this one of the most crucial events for the fate of the region, a truly “strategic blunder” (457) in his own words. He suggests that had al-Husseini been indicted for war crimes, moderate leaders would have taken the reins of the Palestinian national movement and might even have accepted the Partition Plan, dividing Palestine into a Jewish and Arab state and thus avoiding the 1948 Arab-Israeli War. And yet many historians of this period point out that al-Husseini wasn’t as important a public figure at the time as Herf suggests. Thus, this is perhaps the book’s most radical argument, and is indicative of the many possibilities for “what might have been” between 1947 and 1949.

It’s important to note that Herf has a contemporary audience in mind for this book, in addition to the general public interested in history and history students. Herf is highly critical of the changes in attitude of the global left after 1967 toward the state of Israel and Zionism. He writes in the conclusion that “A key goal of the preceding pages is to bring the connection between the liberal and leftist spirit of the antifascism of World War II and its associated support for Zionism to the attention of several generations of readers whose political vocabulary dates primarily from the years since 1967” (462). Perhaps this book will serve to open or enrich both public and academic discussions of the political framework which is used to understand Zionism today.

Herf’s book joins other important works from recent years which embed the Yishuv’s and Israel’s history, and more generally the history of the Israeli-Arab conflict, within the broader context of post-WWII and the Cold War, including  Lorenz M. Lüthi’s Cold Wars: Asia, the Middle East, Europe (2020). These new books expand our understanding of the international history of the region and how it was influenced by but also influenced the changing political climate of the postwar period and the Cold War. Israel’s Moment is recommended reading both for anyone looking to expand their knowledge of the international history of Israel’s establishment, and to undergraduate and graduate students taking their first steps in learning about this complicated moment in time. 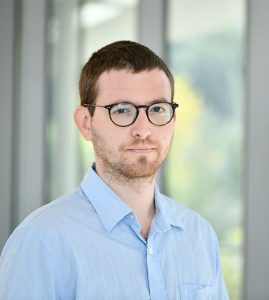 Tom Eshed is a PhD Candidate at the Department of Jewish History and Contemporary Jewry at the Hebrew University of Jerusalem. He completed a BA in History and MA in Jewish History at the Hebrew University. Tom’s dissertation, under the supervision of Prof. Amos Goldberg, explores Holocaust commemoration and remembrance in Israeli cultural diplomacy between 1953-2005. His research follows various commemoration initiatives led by Israeli diplomats and Yad Vashem, Israel’s Holocaust Remembrance Authority, outside of Israel during this time period, from the initiative to confer Israeli citizenship upon Holocaust victims during the 1950s, to the initiative to commemorate an International Holocaust Remembrance Day, which the United Nations established in 2005. In his research, Tom wishes to examine how Israeli cultural diplomacy influenced Holocaust memory in Israel and abroad, and how it affected Israeli foreign relations and its relations with the Jewish diaspora.