Anna Hájková’s The Last Ghetto: An Everyday History of Theresienstadt is an essential addition to the literature about the camp, rivaled in scholarly insight only by H.G Adler’s monumental Theresienstadt 1941-1945: The Face of a Coerced Community. Adler’s work was published in German in 1955 and in a revised and expanded edition in 1960, but was not available in translation for American readers until 2017. Although both books exhibit the prodigious scholarship of their authors, during the interim of more than fifty years much material became accessible to Hájková that was beyond Adler’s reach while he was writing. During her years of research she visited public archives in ten countries as well as several  dozen personal ones. In addition, she interviewed numerous individuals knowledgeable about the camp, including a number of elderly survivors.

The principal difference between the results of their investigations is the  critical fact that unlike Hájková, Adler was a survivor of the camp about which he was writing, taking copious notes during the two years and eight months that he spent there before he was deported to Auschwitz with his wife and her mother (both women went straight to the gas chamber, while after two weeks Adler was transferred to sub-camps of Buchenwald). Hájková is an academic historian, while Adler remained a freelance writer, adept not only as a historian but as a distinguished poet and novelist too. His notes were preserved; he reclaimed them after the war and they formed the basis for his study. Since Hájková depended entirely on the writings and the memory of others, their approaches and emphases differ, though this does not diminish the value of either result. And since it is unlikely that many American readers will have the stamina to persevere through the more than 800 pages that examine the features of Adler’s “coerced community,” readers should feel no hesitation in turning to Hájková’s thoughtful and thorough analysis.

Theresienstadt was a unique site for the gathering of deported Jews, chiefly from Czechoslovakia, Germany and Austria, though smaller groups from The Netherlands and Denmark and some other countries were also found there. The Germans were fond of calling it a “settlement area,” a typical Nazi euphemism for what was a combination of ghetto, labor camp and transit camp, principally to the gas chambers of Auschwitz. But during its existence the Germans first intended to use it for propaganda purposes as a showplace for visiting commissions, trying to create the illusion that life for Jews under German “protection” was not so bad.  For this reason they included among the inmates many elderly over the age of 65, severely wounded or highly decorated World War I veterans, and countless well-known figures from the world of art, music, literature and other major fields of accomplishment. Among notable names of those who died in the camp were sisters of Freud and Kafka, a daughter of Theodor Herzl, and the mother of famed pianist Artur Schnabel. But they form a small minority of the tens of thousands of Jews who passed through to their death, their names unknown and unremembered.

An understanding of how a “society of inmates” emerged from this amalgam of unrelated individuals is one of the many impressive achievements of this volume. Since, according to Hájková, only 28 SS men supervised the “ghetto,” it was essential for the Germans to establish a “self-administration” (as in other ghettos) led by an Elder of the Jews and a Jewish Council. Her account of how their efforts evolved into what she calls “a society based on inequality” makes fascinating reading. To her credit, Hájková resists the temptation to offer a judgmental analysis, preferring instead to rely on a descriptive presentation to introduce her readers to a world that was alien to their own experiences.  Various hierarchies quickly developed in Theresienstadt, certain groups being more privileged than others. Since “staying alive” was the principal aim of every inmate, one had to find strategies for achieving that goal. As Hájková reports, “The most successful factor in avoiding deportation was a functionary’s protection; nearly all who mentioned someone’s patronage were exempted from transport.” Implicit in this revelation is the cautionary reminder that affirming the value of one’s own life often required choices that doomed someone else. Should we regard this as an example of Jewish “agency” to be admired, or do we need a new vocabulary of extremism to define such behavior?

Hájková balances her discussion of daily existence in Theresienstadt between occasions of agency when Jews could choose how to spend their free time and the general atmosphere of “radical powerlessness” (her terms) that eventually prevailed in what Adler had called this “coerced community.” While Hájková is determined to celebrate moments of agency, she veers between two options in trying to decide which is more important for our appreciation of what prisoners had to face: “As long as the inmates lived in a society they themselves defined, they  could exercise an influence over their fate. Transports represented a severe limitation of their ability to exercise agency. This powerlessness is one of the key moments of the experience as a victim of the Holocaust.”

Hájková provides many examples to dramatize this tension. The Jewish Council established a Recreation Committee to develop and support “free time” activities that might restore a veneer of normalcy to the severely deprived living conditions in the camp. On some weekends there were soccer matches attended by enthusiastic fans of the sport.  But in order to enhance the energy of the players, they were fed extra rations for several days before the contest. The only way to make this possible was to cut the rations of other inmates, and this loss invariably fell to the lot of the elderly, who in the camp hierarchy were on the bottom rung. We might call this a “morality of favoritism,” and although it is easy to mistake this for a failure of character among some Jewish internees, it is really a response to the radical powerlessness imposed by the Germans (in this case insufficient nourishment) on meaningful human choices.

There were several hospitals in Theresienstadt, and Hájková documents the admirable effort of doctors and nurses to maintain health standards despite the widespread malnutrition that contributed to the death of thirty-three thousand inmates, many of them elderly, before they could be deported. She finds it remarkable (and justly so) that professional health measures prevented the outbreak of a serious typhus epidemic until the closing weeks of the war, when the influx of thousands of weak and vulnerable prisoners from abandoned camps overwhelmed all efforts to control such an outbreak. In addition, by then most medical personnel had been deported to Auschwitz, so that any pretense at maintaining the appearance of normal existence had disappeared.

Hájková addresses the issue of “master narratives” about Theresienstadt that have emerged over the years with both skepticism and respect. She understands the value of the creative work of artists, composers, performers and lecturers both for themselves and their audiences. But just as some novelists provide their readers with insights into their fictional characters that those characters never achieve, so Hájková’s readers, with the broader perspective that the passage of time allows, know that although the artists and others who see their activities as expressions of defiance or resistance or merely the will to live are really experiencing only a temporary reprieve. With few exceptions, their fate will be to die in the gas chambers of Auschwitz, not because of but in spite of their creative endeavors.

One of the most notable discoveries Hájková made during her research was an archive of petitions—never before seen, she claims—containing appeals from ghetto residents to have their names removed from a current list of deportees. They offered various reasons, ranging from the essential nature of their work to their connections to “higher-ups” in the camp bureaucracy. Many of those petitions were granted, and it does not take much reflection for readers to realize that for every name removed from the list another had to be substituted, and though those unfortunate souls may not have been certain of their actual destination, we have no doubt about it whatsoever. Despite her disenchantment with the idea of “choiceless choice,” which simply argued that in the universe of German cruelty there were moments when the only choices left to victims were between bad and worse, there are examples of many moments like this one buried in Hájková’s narrative. Her analysis of the nature of daily existence in Theresienstadt discourages the tendency to separate celebration from mourning, leaving us to experience simultaneously the temporary triumphs of the creative spirit and the permanent vulnerability of the human body.  It may not be a happy legacy, but it is an authentic one, resembling the rivalry between the acceleration of violence and the quest for peace that is currently afflicting the modern imagination. 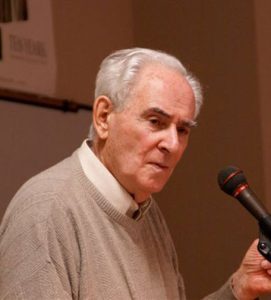 Lawrence L. Langer was born in New York City and educated at City College of New York and Harvard University. He is Professor of English emeritus at Simmons College (now University) in Boston. His many publications include The Holocaust and The Literary Imagination (1975), The Age of Atrocity: Death in Modern Literature (1978), Holocaust Testimonies: The Ruins of Memory (1991), which won the National Book Critics Circle Award for Criticism and was named one of the ten best books of the year by the editors of the New York Times Sunday Book Review, Using and Abusing the Holocaust (2006) and The Afterdeath of the Holocaust (2021). He has also collaborated with the artist Samuel Bak in more than ten volumes of paintings and critical commentary, the most recent of which are Ner Ot: Candles in the Art of Samuel Bak (2019) and Figuring Out (2021).