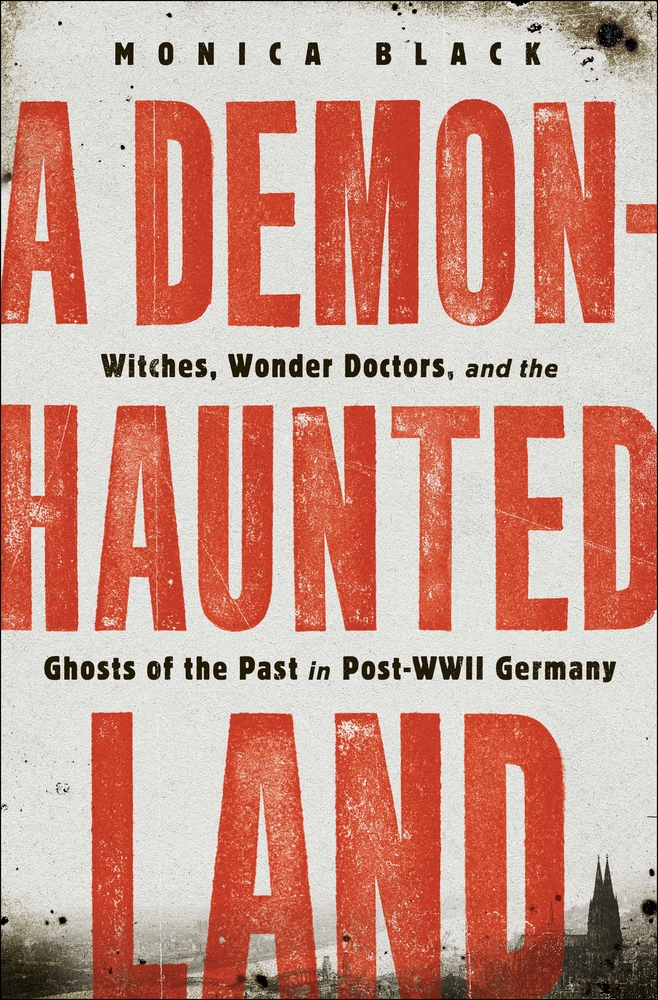 Monica Black’s A Demon-Haunted Land: Witches, Wonder Doctors, and the Ghosts of the Past in Post-WWII Germany asks a timely and urgent question: what happens in a society in which there is no consensus about truth, no center of moral authority, and very little public trust? While these questions have resonance in numerous post-conflict societies where telling the truth about the past is taboo, Black’s book explores how issues of silence, grief, and trauma manifested in West German popular religiosity in the wake of the Second World War.

The history of post-1945 German society often unfolds as a story of recovery, of resilience, and of rebirth. Narratives of West Germany’s postwar period frequently highlight national “miracles”:  West Germany’s Wirtschaftswunder (“economic miracle”), or the first collective joy experienced with West Germany’s 1954 World Cup victory against Hungary, retrospectively called “the Miracle of Bern.” These secular stories of uncanny economic and democratic success reflect a neoliberal teleology of German history, in which GDP and unemployment become the sacred symbols of progress.

Black offers a richly detailed account of how people living with guilt experienced a different sort of miracle. Postwar Germans were haunted by the ghosts of what they euphemistically termed “the recent past.” A Demon-Haunted Land illuminates how a Christian society, which only a few years before was busy with genocide, suppressed those memories after 1945 and turned to a more enigmatic source of religiosity. Religious phenomena that drew on folk traditions and popular expressions of faith offered a different type of healing or redemption than did the traditional mainstream Protestant and Catholic churches. Many of the spiritual and religious phenomena crossed regional and confessional divides in the postwar years. Protestants in northwest Germany and Catholics in the South alike looked for portents and signs of the end times. In 1949, the Catholic folk healer Bruno Gröning launched his celebrity as a miracle worker in the predominantly Protestant town of Herford, in North Rhine-Westphalia and would attract hundreds of more pilgrims in the Catholic stronghold of Bavaria.

This outpouring of religiosity in Catholic cities, such as Munich and neighboring Rosenheim, reflects what historian Michael O’Sullivan has described as a spontaneous and lay Catholic mysticism movement centered on apparitions of the Virgin Mary that disrupted traditional church power structures. In both Protestant and Catholic regions, these popular expressions of faith—pilgrimages or prayer groups that were more likely to take place in a field or home than in a church—revealed a deep distrust of institutions. After years of living under National Socialism followed by Allied occupation, it was easier to put trust in folk doctors or evangelists preaching apocalyptic messages than it was in traditional power brokers. Prophetic prayer, exorcisms, and visions of the Virgin Mary were all things that postwar Germans used to reorient their world and to enable themselves to continue living within that world.

These were not anachronisms – vestiges of the medieval or early modern past – but instead the very fabric of postwar experience in West Germany. The so-called economic miracle and the affluence of a burgeoning middle-class was more of a veneer, a mirrored surface reflecting the ideal of a “normal life.” Underneath West Germans were haunted by wartime memories – of genocide and expulsion and fear and guilt—things too taboo to be spoken into the 1950s society of commercial consumerism and conservative democracy. Instead, those private sentiments of guilt, sin, and the desire for atonement expressed themselves in a distinct culture of postwar religiosity. In the social conditions of a post-1945 Germany, accusations of witchcraft and the presence of folk healers “acted as a language of social conflict” between distrustful neighbors but also between institutions and people who felt powerless in the wake of war (197).

Black draws on a rich base of sources that detail how religious phenomena – interpreting signs of a coming apocalypse, fear of witches, attraction to spiritual healers – were rooted in extreme guilt that haunted a society unable to publicly confront the moral and social ills of the recent past. Black is adept at reading historical silences, on precisely what is being elided or glossed over in traditional archives. As she points out, “there is no archive for fears of spiritual punishment the way there are archives of social movements or political parties or government bureaucracies” (149). West Germans may not have been penning their wartime experiences or deep feelings of malaise, resentment, and shame, but those sentiments surfaced in other ways. Black deftly weaves together evidence from court cases, newspaper articles, and cultural artifacts to shed light on the proliferation of supernatural practices, such as folk healing or casting out demons, in West Germany. Her sources complicate the common historical narrative of how Germans “came to terms” with their past.

Public trust in institutions had been eroded; there was moral confusion, and collective amnesia about the horrors of the Nazi era. Germans at the end of the war had lived through dramatic change: “When the twentieth century began, airplanes had not yet been invented. Few could have envisioned back then that within decades whole cities could be flattened from the air. Few could have imagined that a single bomb could destroy all life in a city and vaporize human bodies, leaving behind only ghostly traces of formerly living beings—or that people could be left “neither dead nor alive,” as took place at Hiroshima, “like walking ghosts” (5). After Nazi medical experimentation, after industrialized mass murder, and after the atomic bomb, science had lost credibility.

This erosion of institutional trust coupled with unpopular Allied denazification efforts and outright denial of antisemitism contributed to a deepening sense of German alienation (30). Cultural anxiety seemed to spring from different sources, not least of which was from the idea of having to bear the burden of collective guilt. After years of living under the surveillance of the Gestapo, there was a fear that neighbors might be reporting on each other or that some individuals might be inappropriately charged with crimes. This was a society not ready, or not willing, to confront its history – a people reluctant to admit guilt, who grew defensive even talking about Nazi atrocities.

In beautiful prose, Black crafts a vivid portrait of this ruined Germany grappling for some sort of redemption. Her descriptions of the landscape itself reflect a country in transition and emotional turmoil: “The calendar promised imminent springtime, but Herford was gloomy, wet, and windy, and the coming days would be colder. Here, in the Ravensburg basin…the late-winter sky can turn pitiless and leaden against a landscape of alternating woods and meadows, with towns and farms and villages unfurling into the distance as far as the eye can see. In rainy weather, mist can veil the black-brown earth, merging landscape and sunless sky into a single, inscrutable shade the color of wet wool” (45).

Black likewise demonstrates historical empathy for her subjects, something so critical and often missing from historical scholarship. Here were people, feeling powerless and even nihilistic, desperate for some sort of redemption. They were hurting both mentally and physically, scarred by years of war and depravation and seeking healing for both, which they found in figures such as the “Wunderdoktor” Bruno Gröning. Of course, Black’s history does not center solely on men like Gröning or their charisma, but rather on the people who sought these healers and itinerant miracle workers out, on “the hopes, fears, and fantasies they projected onto him” (45). Here was an escape or a chance at atonement after the unspeakable crimes of the Third Reich, a regime that most Germans had at the very least tacitly endorsed.

In some ways, this is a uniquely German story. For instance, the largely forgotten witchcraft accusations in the early 1950s revealed a culturally German understanding of witches, evil, and the practice of Besprechen, a folk medicine that relied on charms, gestures, and words that blurred the lines between magic and medicine (167). The fact that Gröning, who appealed to both Catholics and Protestants, spoke in terms of “evil spirits” rather than sin and forgiveness reflected popular understandings in German-speaking Europe of folk doctoring as something that involved magic and supernatural ability. The desire for atonement from the sins of the recent past or an apparition of the Virgin Mary threatening of another Russian invasion for unbelievers had a specific postwar German flavor (148).

Yet the outgrowth of religiosity in moments of instability is a familiar story and not uncommon in modern history. The Taiping Rebellion in the mid-nineteenth century, one of the most devastating civil wars in modern history, can be traced to a failed civil servant (Hong Xiuquan) who declared himself the brother of Jesus. Popular religiosity and support of the Taiping revolutionaries grew out of an instability and disquiet following a series of natural disasters, increased banditry, and the humiliating defeat of the Qing dynasty by Great Britain in the first Opium War. Just a couple of decades later, in the United States, people flocked to spiritual mediums and held seances in their homes following the U.S. Civil War. More recently, the 2011 tsunami that struck the northeastern Tohoku region in Japan left in its wake moral distress, anxiety, and the ghosts of the dead in a marginal community that felt forgotten.

In postwar Germany, it was the specter of the Nazi past that created a crisis of anxiety. The German response was not unlike that of other societies that react viscerally and often violently to truth-telling. This tends to be the case in societies where historical truths have been suppressed and taboo to speak in the public sphere, and so they often bleed into conspiracy theories and ghost stories. Black makes two comparisons especially poignant for white middle-class U.S. Americans: the satanic panic of the 1980s and persistent tales about haunted Indigenous burial grounds. She writes, “Tales of hauntings express an otherwise unspoken and sublimated terror at the center of white American life: that vengeful ghosts will come back and reclaim what’s theirs” (155). Likewise, Germans were eager to suppress memories and to treat facts as opinions, something all too familiar in our current global landscape where socio-economic anxieties and social alienation have manifested in conspiracy theories, populism, and mistrust.

A Demon-Haunted Land is a book that reaches beyond national narratives, as it speaks to universal themes of memory, guilt, and atonement. These themes echo in the social landscape of 2021 and challenge the reader to consider what atonement or reconciliation look like in our own societies, especially when a nation’s historical crimes are part of its very foundation. Black’s work inspires further explorations into post-conflict trauma, reconciliation, and the role of gender in popular religiosity. This book deserves a place on graduate and undergraduate syllabi (the author knows from experience that it goes over well in undergrad seminars) or on the bookshelf of anyone interested in understanding how fear, guilt, and myths of victimhood breed social anxiety and paranoia. 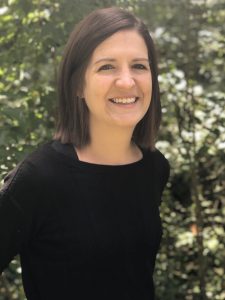 Kathryn Julian is Assistant Professor of History at Westminster College and received her Ph.D. from the University of Massachusetts-Amherst in 2017. Her research and teaching focus on collective memory after postwar trauma, history of religion and sacred space, and comparative truth and reconciliation. Kathryn’s most recent public-facing projects explore the intersections of history and justice and how historical memory plays a role in efforts to confront past injustices.