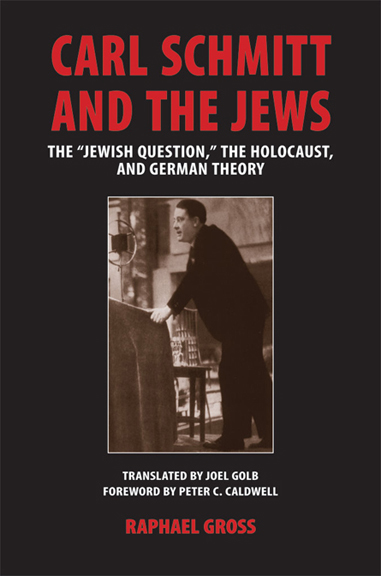 This is the second in a series of posts about Raphael Gross’ Carl Schmitt and the Jews.

In the third chapter of the book, Gross attends to the ways in which Schmitt imagined Jews as Germany’s enemy. He draws on Schmitt’s work under the Third Reich to argue that Schmitt saw Jews as a particularly insidious enemy because they were “invisible” in German society, with nothing to clearly mark them as different from Christian Germans. He described Jews as “[t]he alien individual of another nature,” a group that could never truly become part of the German national community. Unlike Germans, Jews existed not in relation to a piece of land, but solely in relation to the law. They “exist without land, without state, without church, but only in the Gesetz. For them normativistic thinking appears the only rational legal thinking, and every other kind of thought incomprehensible, mystic, fantastic, or ridiculous” (61), Jews could never really become German and constantly threatened to undermine real Germanness from within. In choosing this line of argument, Schmitt relied on the ideas of Protestant theologians, though he was Catholic. These theologians developed a new theology that replaced the traditional center of throne and altar with God and Volk, placing a racialized conception of faith at the center of German Protestant life. Such a conception also denied the possibility of Jews ever joining the Volk, even if they converted to Christianity.

Schmitt also drew on Protestant theology about the Antichrist, to assert that Jews practiced a “change of masks” (75) to hide their true identity in other societies. They were different from other enemies. The Russians, French, and British might be enemies at particular moments, but Jews were spiritual enemies that attempted to exploit the weaknesses of Germans – “not the alien other; rather, they are one’s own, intimate Other” (76). Germany’s enemy was “simply the other, the alien, and his essence is defined by the fact that in an especially intensive sense he is existentially something other and alien.”

Gross draws our attention to Schmitt’s organization of a conference titled, “Judaism in Legal Studies” in October 1936. Gross argues that this was an attempt by Schmitt to create a scientific basis for his professional victory over his Jewish competitors. At the conference, Schmitt announced, “[w]e are speaking of the Jews and naming them by their name” (72). This sentence, with a shift in what semitically-defined enemy the speaker was discussing, appeared in the 2016 presidential campaign from President Trump and his subordinates. The concept underlies the executive order banning travel from seven countries, in the name of protecting Americans from enemies that the liberal state will not protect them from, with its promise of the rule of law. Worries that “radical Islamic terrorists” can infiltrate American society among a large group of refugees seeking to escape the violence of war, reflects the same concerns expressed by Schmitt.

A similar fear, of infiltration of the national community by Jews and other semites, animated Schmitt’s concept of sovereignty, which will be the subject of the next post in this series.