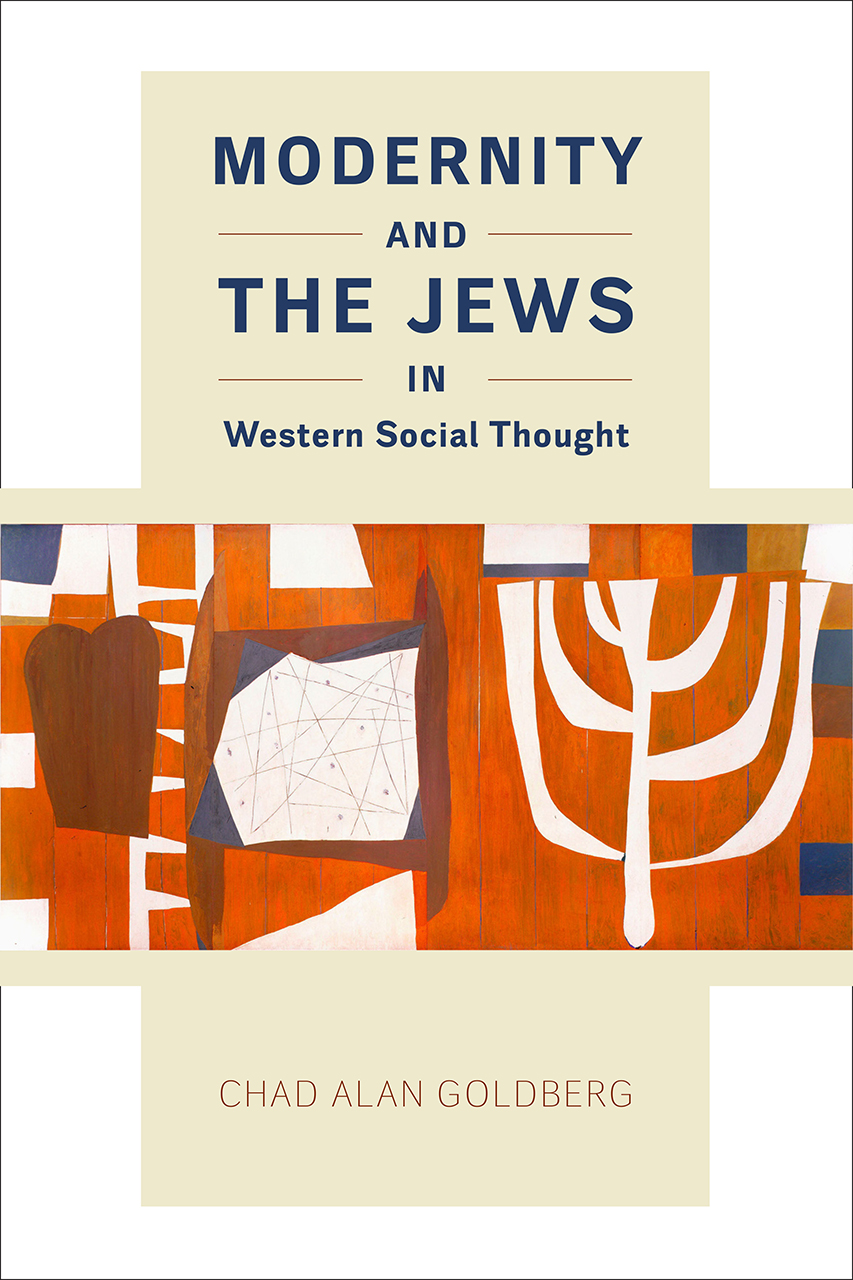 In the late nineteenth and early twentieth centuries, prominent social thinkers in France, Germany, and the United States sought to understand the modern world taking shape around them. Although they worked in different national traditions and emphasized different features of modern society, they repeatedly invoked Jews as a touchstone for defining modernity and national identity in a context of rapid social change.

In Modernity and the Jews in Western Social Thought, Chad Alan Goldberg brings us a major new study of Western social thought through the lens of Jews and Judaism. In France, where antisemites decried the French Revolution as the “Jewish Revolution,” Émile Durkheim challenged depictions of Jews as agents of revolutionary subversion or counterrevolutionary reaction. When German thinkers such as Karl Marx, Georg Simmel, Werner Sombart, and Max Weber debated the relationship of the Jews to modern industrial capitalism, they reproduced, in secularized form, cultural assumptions derived from Christian theology. In the United States, William Thomas, Robert Park, and their students conceived the modern city and its new modes of social organization in part by reference to the Jewish immigrants concentrating there. In all three countries, social thinkers invoked real or purported differences between Jews and gentiles to elucidate key dualisms of modern social thought. The Jews thus became an intermediary through which social thinkers discerned in a roundabout fashion the nature, problems, and trajectory of their own wider societies. Goldberg rounds out his fascinating study by proposing a novel explanation for why Jews were such an important cultural reference point. He suggests a rethinking of previous scholarship on Orientalism, Occidentalism, and European perceptions of America, arguing that history extends into the present, with the Jews—and now the Jewish state—continuing to serve as an intermediary for self-reflection in the twenty-first century.

What are scholars saying about this exciting new title?

Michael Walzer, professor (emeritus) of social science, Institute for Advanced Study
“Most of this book is a masterful account of how Jews figured—as traditionalists, innovators, radicals, and ‘marginal men’—in the development of modern social theory and academic sociology. But the book should also be read for its final chapter, which includes a sharp critique of post-9/11 political discourse about the Jews—and also the other ‘others.’”

Lila Corwin Berman, Temple University
“Above all, a singularly lucid summation of the modern ‘Jewish question’ as a sociological question, Modernity and the Jews makes a compelling case for the value of historical sociology. Goldberg situates French, German, and American social thinkers in their historical contexts in order to show how and why they produced the Jew, as a category of analysis and a means of social criticism. By employing a comparative mode, he shows how social thought about the Jew reflected specific circumstances and, also, replicated habits of thought about political modes, economic systems, and cultural forms. A bold book, unafraid to step into the fray of debates about Orientalism, the role of the Muslim in today’s social thought, and the claims of anti-Zionism, Modernity and the Jews brings the history of western social thought directly into our own moment in time.”

Peter Kivisto, Augustana College and St. Petersburg State University
“Goldberg’s original and provocative thesis—based on case studies of foundational figures in sociology from France, Germany, and the United States—is that Jews and Jews alone came to be treated as the signifiers of the pre-modern/modern binary. And as such, for scholars such as Durkheim, Marx, Weber, Sombart, Simmel, and Park, Jews were viewed as occupying a unique social space, being an Other unlike any other Other. Cogently argued and spelling out the implications for the discipline, this is a must-read book, deserving of serious scholarly reflection.”