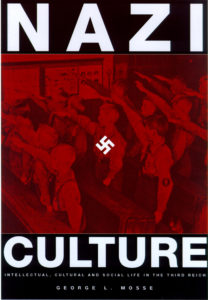 While I have used my previous two posts for this blog, sponsored by the George L. Mosse Program, to highlight the enduring value and integrity of George Mosse’s editorial work in compiling Nazi Culture: Intellectual, Cultural and Social Life in the Third Reich (1966); I wish to use my final post to address first how I have employed this work in the classroom to teach the Third Reich. And second, why Nazi Culture is as important now as it was in 1966 with the book’s publication.

At my institution, Trinity College, I teach a course titled “Inside the Third Reich,” which I designed with the intention of exploring different facets of Nazi Germany. While the course certainly pays attention to intertwined fields such as the Holocaust Studies, my central focus is the machinery of Nazi fascism. What is Nazism? I ask my students. Naturally, the work of George L. Mosse has become a central component of the course—particularly Nazi Culture. As right-wing populism and nationalist movements seem to surge across the West, I believe—and hope—that student interest in exploring what Nazism actually meant, how it ascended to power, and how it interacted with the world will continue to grow concomitantly.

The thematic units into which Mosse divides Nazi Culture primary documents make the edition an especially useful tool to explore the Third Reich. The documents proved especially useful when paired with other cultural products of the time. For instance, “A Meeting Hall Brawl,” an account of a beer hall melee told by the SA-man Kurt Massmann, was a revealing supplement to Bertolt Brecht’s The Resistible Rise of Arturo Ui (1941), which is essentially an allegory for Hitler’s rise to power and the Night of the Long Knives. In this pairing, the Massmann text illuminates the literary text and students are easily able to discern Hitler’s motivation in divesting the Nazi Party of the unruly elements of the SA. Another natural pairing was having the students watch the Nazi youth film Hitlerjunge Quex (1933) in unison with the section titled “Building Myths and Heroes.” The texts concerning other heroes of the Nazi movement further reveal the fictionalized mythologization of the real-life Hitler Youth member Herbert Norkus, who was killed by communists in Berlin in 1932, was but one example of the Nazi martyr pantheon.

In 1966 when Mosse’s Nazi Culture first appeared, the world had been rid of the Third Reich for hardly twenty years. World War II was still recent history and the new organization of the world, wrought by the all-encompassing polarizing Cold War, could easily be explained by looking back to its source in the Second World War of the century. Twentieth-century totalitarian politics endured in Europe in both Spain and Portugal. The 1960s of course now signify a watershed decade in

which the ordering of European society underwent drastic changes, full of “where were you when…” moments. Still, as it goes, we often don’t register the weight of current events until sometime later, but it’s hard not to think that the publication of Nazi Culture had something to do with the uncertainty of the 1960s. Just as Nazism was the culmination of intense social and political tension that began with the end of World War I, to a historian the social contradiction and strife of the 1960s must have pointed one’s imagination back to the Weimar Republic and what came with the failure of liberal democracy in 1933.

Today we still look back to the rise of Nazism for parallels to explain current social and political circumstances. No doubt such comparisons are more often than not exaggerated and incongruous. Nevertheless, while Americans have sometimes vigilantly sounded the alarms against elements deemed as totalitarian, such as in the era of McCarthyism, we have also at times held a naïve belief in our democratic immunity to an authoritarian turn. Nobel Prize winner Sinclair Lewis immortalized this naiveté in his 1935 novel It Can’t Happen Here, which has seen a surge in relevance and sales since the end of 2016.[1] Whether or not this instinctive analogizing with the Third Reich amidst the perceived political and social turbulence is correct or not, is less my intention with this post than to point out the fact that the rise of Nazism has left an indelible print on own society. We must study the past carefully in order to draw accurate lessons. With this in mind, we would all be better served to look to the work of George Mosse who has much to teach us about both the past and the present.

[1] See Beverly Gage, “Reading the Classic Novel That Predicted Trump.” New York Times. 17 January 2017. [https://www.nytimes.com/2017/01/17/books/review/classic-novel-that-predicted-trump-sinclar-lewis-it-cant-happen-here.html?_r=0]. Ironically, the renewed German interest in the story of a hypothetical fascist takeover in America—written by an American author who was looking to what was happening in 1930s Germany for inspiration—might even surpass that of the Americans considering Der Spiegel listed a new printing of the translated version of this work as one of the most important twenty books at the 2017 Leipzig Book Fair [http://www.spiegel.de/kultur/literatur/leipziger-buchmesse-2017-die-wichtigsten-romane-der-saison-a-1139750.html]