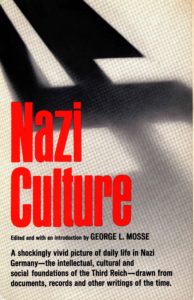 In my last blog post I made the case for the significance of George Mosse’s work, and in particular his book Nazi Culture: Intellectural, Cultural and Social Life in the Third Reich. The relevance of studying Nazi culture today is obvious. In this post I would like to sharpen focus on the content of this work and how it documents the architecture of the Nazi machine.

While Mosse’s introductory essay to the work is meritorious enough to stand alone—it not only serves to establish the contents but also provides a succinct and informative overview of Nazi culture—the content of this book is an essential resource for the study of the Third Reich. Mosse readily recognizes that a work of this size is not capable of providing an exhaustive representation of the Nazi regime, and he has selected from a broad enough array of aspects of the Third Reich to provide forceful examples from all the foundational pillars of Nazi culture.

Because Nazism was largely based upon the vision of one man, Mosse begins his investigation of Nazi culture with Adolf Hitler. We know that the roots of Nazism were planted long before Hitler was preaching in beer halls to the disillusioned masses about the gloom and doom facing Germany after World War I, but this provides a manageable starting point for an apercu of this expansive topic. As any such edition of the Third Reich would do, Nazi Culture begins with a number of salient excerpts from Hitler’s Mein Kampf. Mosse presents these by adding a title to each which summarizes the meaning. For instance, one of these, titled “The Power of Ideals” is a short paragraph that encapsulates Hitler’s conception of the superiority of an “ideal Reich” over that of a “material Republic” (5). Another short passage titled “The Jew Has No Culture” gives a brief but powerful example of the blatant antisemitism to be found in Mein Kampf. In addition to other usefully excerpted passages from Hitler’s one published book, Mosse includes two parts taken from two speeches given by the Nazi leader. This chapter, titled “Hitler Sets the Tone,” provides through excerpts a synopsis of many of Hitler’s foundational ideas that propelled the Nazi regime until its end. These excerpts are a useful tool for instruction on the Third Reich on their own or as a companion to other readings about Nazism and its leader.

In the second chapter, titled “What Sort of a Revolution,” Mosse seeks to provide a picture of the multitude of ideas that were corralled and ordered into a single National Socialist Revolution. He writes that the revolution, “stressed both the dynamic of the movement and the ‘taming’ of that dynamic through an appeal to tradition and sentiment” (17). The potency of the Nazi movement would have been doubtful without this duality of chaos and order in its trajectory. Mosse begins this exhibit of the transformation of the Nazi movement with two texts about the Sturmabteilung (SA) and its destabilizing factor Weimar Republic. The second of these, a first-hand account of a beer hall brawl, is especially pertinent in conveying the brutality and chaos that was at the very foundations of National Socialism. If anything, Nazi Culture would have benefited from inclusion of more such accounts of the SA. Surprisingly little scholarship has been done on the personal histories of the men who early on donned the brown shirts, which leaves us wanting to know more about the background and experiences of these men. The majority of this chapter is dedicated to texts that convey the foundational values of the Nazi movement. Most of these texts are dedicated to the idealization of the German family and laying out the role of women in the National Socialist ideological system. Among these is a short newspaper piece on Magda Goebbels, who was idolized as the ideal German woman in appearance and deed—the antithesis of the New Woman type that flourished in the liberal culture of the Weimar Republic. The last short section of this chapter highlights prescribed Nazi social life. One interesting text titled “Does the Five O’ Clock Tea Suit Our Time?” from 1937 shows how totalizing Nazi ideology actually was. As the title suggests, this article takes aim at the English custom of five o’clock tea, calling it “a degenerate social form” (49). Naturally, the author promotes the eradication of this foreign practice, while brandishing other xenophobic and antisemitic opinions along the way. The author’s confused argumentation shows the significant role that such fear mongering and paranoia played in the culture of the Third Reich.

Additionally, chapters four, five, and eight provide an interesting insight into the creation the Nazified mind. The fourth chapter, titled “Building Myths and Heroes” takes a look at one of the most basic components of all nationalist movements: finding heroes and creating their narratives. One would be hard pressed to find a kind of nationalism without a founding father or martyr. The Nazis created these figures both in the form of historical “great men” and in the common man and woman. Included in this chapter are texts of the former type, such as Frederick the Great, but also those of the latter type with texts such as one from Ernst Röhm titled “A Soldier believes in Plain Talk” and Gudrun Streiter’s “The Diary of an SA Man’s Bride.” We see that both the grand and common hero played an integral part in the mythology of the Third Reich.

Chapter five is particularly useful for those who are interested in the literature of the Third Reich. Even though literature concerned with the Third Reich can be confidently asserted as a dominant topic in German literary studies still today, little attention is paid to that which was written in Nazi Germany—and this is not without good reason. As Thomas Mann famously answered Walter von Molo’s open letter about the inner emigration of the many intellectuals who opted to stay in Nazi Germany, “in meinen Augen sind Bücher, die von 1933 bis 1945 in Deutschland überhaupt gedrückt werden konnten, weniger als wertlos” [in my view, books that were allowed to be published from 1933 to 1945 in Germany are less than worthless] (Hermann Kurzke, Thomas Mann: Epoche – Werk – Wirkung (Munich: C.H. Beck, 1985), 37.). With good reason, most scholarly attention to the literary production in the years from 1933 to 1945 has been paid to the exiles who wrote in absentia from and opposition to their Nazified homeland. Nevertheless, we could stand to learn about the Nazi machine by a re-examination and deconstruction of those Nazi narratives. George Mosse’s chapter dedicated to this body of literature provides a good starting point for a basic summary of Nazi literature. In the introduction to the chapter titled “Toward a Total Culture” Mosse tells us that “in the Third Reich the central task of culture was the dissemination of the Nazi world view” (133). This task was given to the Reichskulturkammer (Reich Chamber of Culture) that was split up into separate chambers overseeing such fields as literature, film, radio, and other arts. Mosse includes excerpts from works of literature that were officially sanctioned by the chamber providing an overview of the themes, settings, and genres that belonged to Nazi literature.

Finally, chapter eight tackles the importance of youth and education in the Third Reich. George Mosse tells us that “Nazism, like any revolutionary movement, attempted to capture the new generation and rally it to the cause” (263). The indoctrinated younger generation was groomed to complete and perfect the Nazi revolution. So important was youth in the Third Reich that Hitler dedicates much space to outlining his concept of pedagogy and vision for young Germans. As Mosse points out in the quotation above, the importance that the Nazis placed on youth should come as no surprise considering the widespread youth groups in the Weimar Republic representing the entire spectrum of political ideology. The Hitler Youth exists today as a commonplace name and it epitomizes the organization of young people in the age of ideology. This organization became such an ingrained feature in the Third Reich that it even had its own martyr Herbert Norkus who was killed by communists. The slain youth’s ascendance into national mythology with the book and subsequent film Hitler Junge Quex further exemplified the importance of youth. The chapter includes texts that provide an idea of what was deemed essential in National Socialist education.